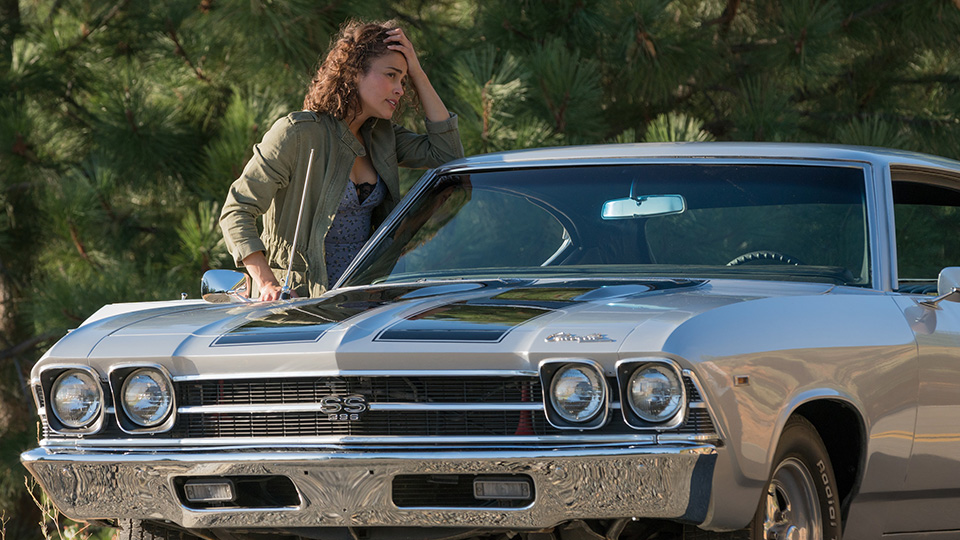 Reporter Brea (Paula Patton) is whisked away on a romantic weekend by her boyfriend John (Omar Epps) following an upset at work that saw a story she’d been working on for months get scooped. On the way to their destination, the couple stop at a petrol station where they encounter a racist biker gang and Brea has an interaction with a mysterious woman whom she believed was asking her for help. Follow a tense exchange with the biker gang, Brea and John are followed by one of the bikers, who tries to run them off the road, but they manage to lose him. Arriving at the house they’re renting for the weekend, the couple are surprised when their friends Malia (Roselyn Sanchez) and Darren (Laz Alonso) turn up. Brea discovers a satellite phone in her purse and before long the biker gang, whom it belongs to, come knocking to get it back.

Traffik is inspired by true events and once you get past the set-up, the film reveals its hand as a comment piece of the trafficking of women in America. Brea and John accidentally enter the cross hares of the biker gang led by Red (Luke Goss), when the satellite phone is slipped into her purse by the woman she met at the petrol station. After accessing the contents of the phone, Brea realises the woman was one of many who was being trafficked and abused by the bikers. I don’t want to give too much away but the issue is explored further when the film transforms from a thriller to a home invasion style movie.

The premise of Traffik is a solid and intriguing one but it’s let down by the way the story unfolds and the script. Clearly a vehicle for Paula Patton, who also produces the film, Traffik isn’t quite serious enough to get its point across and it throws in a few too many sub-plots that distract from the main subject. Brea and John’s friends Malia and Darren aren’t really necessary to the plot, and they take up time unnecessarily. There’s also an odd lack of emotional connection between the characters. John and Darren are supposed to be best friends but Darren acts like he hates him while Brea doesn’t really seem to care all that much when her friends’ lives are hanging in the balance.

Paula Patton turns in a very strong performance, even though she’s better than the material here. A very underrated actress, Patton is incredibly versatile and she can definitely carry a film. She’s head and shoulders above Omar Epps and Laz Alonso who, in their defence, have very bland characters to work with. Roselyn Sanchez brings her a little lightness to the film and Dawn Olivieri is suitably mysterious/creepy whenever she turns up. The bad guys aren’t given very much development at all and Luke Goss gives the kind of performance he could deliver in his sleep.

The DVD features two behind-the-scenes extras; a 15-minute Journey into the Depths: Making Traffik and the 8-minute Deon & Dante: The Look of Traffik. Journey into the Depths explores the inspiration behind the film and discusses human trafficking, while Deon & Dante takes a look at the collaboration between director Deon Taylor and legendary cinematographer Dante Spinotti (The Last of the Mohicans, L.A. Confidential) and how they brought the film to life.

Traffik is a very surface-level exploration of a very serious issue that affects millions of women across the world. Dressed up as an edgy thriller, its message gets lost in the mix and some seriously stupid decisions by all the characters will have you shouting at your screen. It’s not the movie that it thinks it is but if you take it for what it actually is, you’ll be able to turn your brain off for 92 minutes and just enjoy it. I can see what the film was trying to do but sadly it doesn’t quite hit the mark.