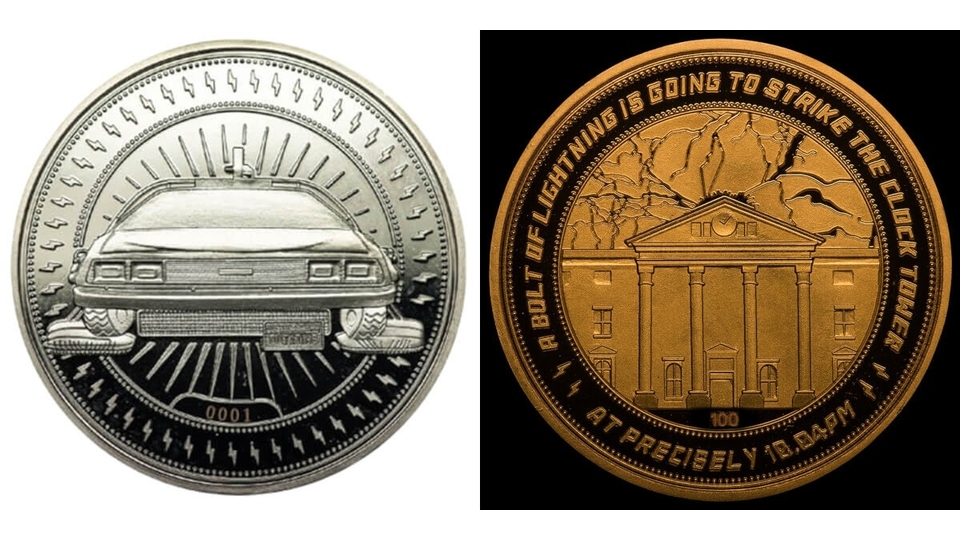 One of the greatest films of all time Back to the Future has been commemorated in a series of new coins available to buy now from Zavvi.

This is not only a premium quality, limited edition, fully licensed coin; it’s also a great keepsake of your beloved films – with other movies also covered like Jurassic Park, Jaws, Star Wars and the Simon Pegg double of Hot Fuzz and Shaun of the Dead.

Limited to 5,000 worldwide, the Silver Back to the Future coin is individually numbered. Embossed on both sides with artwork depicting the DeLorean in flight and the Flux Capacitor, each coin measures 3.8cm (in diameter). It comes supplied clam-packaged in a hard plastic case with a colour insert which makes it easy for MOC collectors to display.


The Back to the Future Gold coin is rarer and limited to 1000 worldwide. Officially license and individually numbered too, it’s also embossed on both sides. One side has the same Flux Capacitor design as the silver coin and the other has the infamous Hill Valley Clock Tower with the time that it gets struck by lightning.

The coin features distressed edging and is packaged in a hard plastic case. The size is the same as the Silver BTTF coin – a 3.8cm diameter. The coin comes in a separate protective case allowing the coin to be taken out of original packaging for display purposes too. The original packaging is also re-sealable if you want to open yours.

Check out the images of the gold and Silver coins below and order them from Zavvi soon before they disappear… perhaps leaving a trail of fire behind them too.