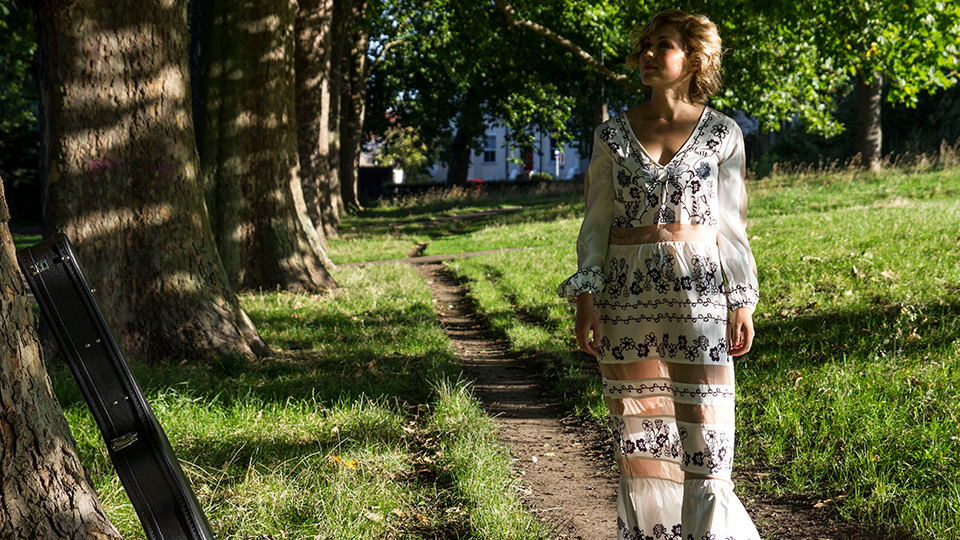 Since releasing her EP Coming Home in 2012, Irish singer-songwriter Megan O’Neill has become one of the most popular acts on the UK country scene.

As well as appearing at festivals like C2C and Nashville Meets London, an audience of millions heard Megan’s songs when her music was featured on the hit TV series Nashville. Now she’s released her debut solo album, Ghost Of You, and is touring throughout the summer.

I spoke to Megan recently about the album, her Around The Sound podcast, her views on the situation for women in country music and even some hints about her next record.

You’ve just released your new album Ghost Of You – can you tell us more about it?

Sure! So we recorded it out in the States with a producer called Zac Lloyd back in September of last year. You kind of have to work backwards from the date that you want to release it with all the singles and everything, so the first single came out in October, then we did another one in January, another one in April and now the full album. It feels crazy ‘cause it’s come around so quickly! [laughs]

Were there any songs that were particularly easy or difficult to write for this album?

I mean, some of these songs I’ve kind of had for three years. Bottle, which is one of the songs on the album, I wrote about three years ago. So some of the songs I always knew I was going to record them, so they were already ready to go, and then some of them we wrote while producing the album. And to be honest the whole process was quite easy, because I had really great writing partners and it just seemed to ebb and flow really great. There was never anything we were getting too stuck on – I mean, there’s always a line here or there that you probably want to change. But the production of it, there were definitely a couple of songs that took longer than others [laughs] where we weren’t exactly sure what we wanted in them and so there was a bit of trial and error with a few of the songs.

Did anything in particular inspire the songs?

Yeah, there’s one song on the album which supposedly seems to be everybody’s favourite so far [laughs]. It’s called Any Younger, and I wrote it with a duo called the Dunwells up in Leeds. That song was really from the heart because it’s kind of the idea that we’re not getting any younger, and so you have to do the things you want to do and follow the things you want to follow, even though that can be really difficult sometimes. So that one was from a really deep place, I think. Sadly in the music industry, because it’s very easy to get disheartened and to think you’re following the wrong thing sometimes.

You launched your podcast Around The Sound earlier this year. What made you decide to do that?

Yeah, I had the idea to do a podcast for about a year, and it just never felt like the right time. But I don’t think it ever is the right time. So I was at home in Ireland and I was just like, ‘screw it, I’m gonna start in January, I’m just gonna do it, I don’t know what’s gonna happen’ [laughs]. And the idea behind it was I work with so many amazing people in the music industry all across the world, and it’s a really difficult industry to figure out what’s the best way to go and what’s the best path to follow and what you’re actually supposed to do. So my idea behind it was to kind of educate and give information to budding singer-songwriters and producers and journalists and bloggers and anything to do with music really. Anyone that’s working in that realm, to kind of come on, have a bit of casual chat and tell us about their life, really, and hopefully inspire and educate other people wanting to get into the industry.

Have you had a favourite guest so far? And who would you like to guest on the podcast?

Oh, the last guest we had was an incredible singer-songwriter called Steve Bolsamo, who was Andrew Lloyd Webber’s Jesus Christ Superstar for a while and was in Les Mis and has just done so many ridiculously incredible things with his life. I wouldn’t say he’s my favourite guest because I don’t think I can pick a favourite, but the chat with him was just so, so interesting. So that was a great one.

And then in terms of who I’d like to get on… everybody! [laughs] No, I’d love to get some of my inspirations and my idols, like The War On Drugs, Ryan Adams, Brandi Carlile. I hope some day the podcast gets big enough that I can have guests of that calibre on.

Ohhh! I think it would have to be I Can’t Make You Love Me. It’s kind of one of those classics that is just heart-wrenching every time I listen to it, and it never gets old. So that’s the sign of a great song, isn’t it, if it never gets old.

You’ve recently been out on the Write Like A Girl tour and often talk about gender equality issues on your social media. Do you think things are changing for women in country music?

I do. I can’t speak for the US, because I don’t live there and I’m not in that market and I know that a lot of people are having some issues over there with the same topic. But I think in the UK there’s so many incredible female singer-songwriters, and especially in country music here I think the women are leading it. I really do. Like the amount of women I know that are just inspiring and incredible and smart and just killing it, really. So I think I’ve been lucky enough in my life to have been brought up in a family and brought up in a culture and in a generation where women and men are equals, and I’ve always felt like an equal, although I know that sometimes when you open your eyes a little bit wider in the outside world it’s not always that way. But I feel like in country music in the UK it’s definitely a great balance and the women are just smashing it.

I mean I started learning piano and guitar and all these different instruments when I was a kid. I guess that’s what you do when you’re a kid, you hope between things that you’re interested in. My big love as a kid was horse riding. I always thought that I was gonna grow up and be a horse racer, be a jockey. And then I fell in love with musical theatre when I was about eight or nine. I think that was kind of my introduction to being on stage and using my voice, and I kind of fell in love with it from that age. And then I went to college and I just had so many signs in my life that were pointing me towards doing it. I went to college to study psychology which was a three year degree, and I actually ended up getting a scholarship for music while I was doing it. So all these signs were just kind of taking me there and when I graduated college there was nothing else that really appealed to me. I was just like, ‘I really want to do this with my life’.

There have been so many years where I’ve said, ‘if it doesn’t work this year I’m out. If I don’t progress this year then I’m done’. Because it’s a very difficult industry and when I get together with fellow singer-songwriters and we all have a chat we’re all bitching about the same thing! [laughs] ‘Oh my God, we’re broke and it’s so hard’. So everybody is in the same boat. But at the end of the day if it’s your passion and you know there’s nothing else you really want to do with your life you just have to do it. It’s like breathing.

How was it finding out that your song was going to be on the TV series Nashville?

Oh, it was really cool. I had just left Nashville actually, I’d been living there for a while and I’d just moved to London, and Nashville the TV show was like my guilty pleasure. I was just watching it back-to-back episodes, and it was really surreal to hear my song on it. A real blessing. I’m really grateful to have had that opportunity. So yeah, just surreal I think! [laughs]

Oh God! Yeah, I would definitely like to go on tour with some big acts, because I love touring. I would love to be opening for a couple of my idols, which would be Ryan Adams, Brandi Carlile, First Aid Kit, War On Drugs. I’d love to be going on tour with those kind of artists. I’d also love to play at some point in my life the Ryman and the Royal Albert Hall. They’re kind of my top two venues at the moment [laughs]. I mean I’m really fortunate to already be doing a lot of the things that I set out to do and if I was Megan seven years ago I’d be so excited about where I am now. But it’s very hard when you’re in the moment to stand back and appreciate what you’ve achieved, because you always want the next thing, or I do anyway. I’m dreadful like that – I’ll achieve something that I’ve always wanted to do and then I’ll be like, ‘OK, great, what’s next?’ But I’m really lucky to already be doing a lot of the things that I said I wanted to do with my career in music. The people that I’m writing with, the people that I’m working with, the podcast that I’m now doing, the tour that I’m doing this summer, the festivals I’m doing – I’m very grateful for all of it. So I think the bucket list thing is just keep doing what I’m doing and keep growing. Then I’ll be pretty happy.

What does the rest of the year look like for you?

Yeah, June is pretty crazy for me right through to mid July – lots of shows. I’m actually already working on the next album, which is crazy! But we’ve got three weeks blocked off in October to record the next album so I’ve just started working on the writing for that and what kind of style we’re going for, because I think we’re going for more of a soulful country vibe which I’m very excited about. There’s a few tracks on Ghost Of You which are gonna kind of lead people to where the sound is gonna go for the next one. So yeah, just writing, touring, working with some of my favourite people in the world and keep working hard. That’s how all the best things happen! [laughs]

See Megan O’Neill live in the UK this summer: