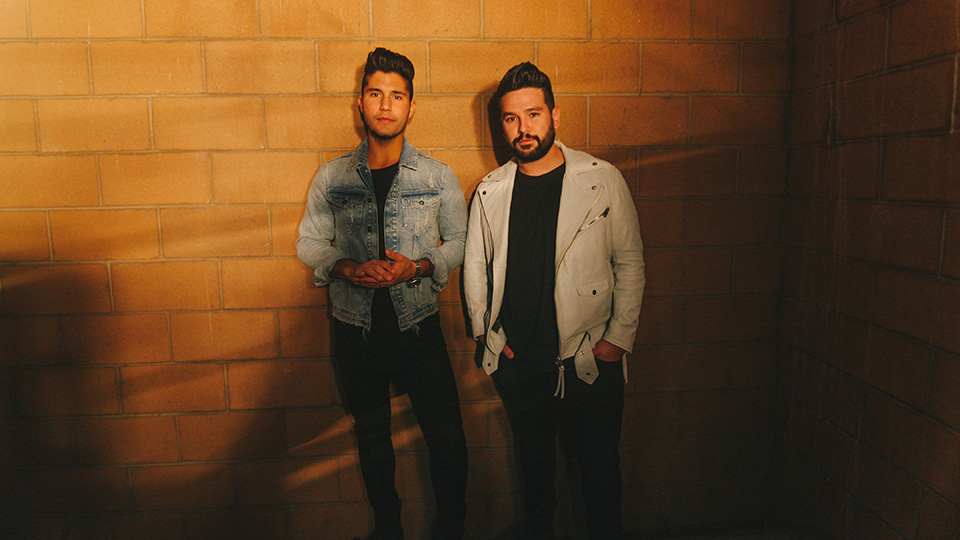 When it comes to making radio-ready, Country-pop with catchy melodies and sing-a-long choruses, no one comes close to Dan + Shay. The duo arrived on the scene with their breakout Platinum hit 19 You + Me in 2013 and their 2014 debut album Where It All Began hit number one on the US Country Chart. Their 2016 album Obsessed crashed into the charts at number two and it gave them their second Platinum hit, From the Ground Up. Proving their crossover appeal, both albums charted in the Top 10 on the Billboard 200 and Obsessed hit number one here on the UK Country Chart.

Earlier this year Dan + Shay released new single Tequila, which is shaping up to be another huge hit from them. Details of their third studio album started coming thick and fast along with several more tracks from the record to whet our appetite. The self-titled collection arrives on Friday and if you’ve heard the teaser tracks, you’ll be pleased to know that duo maintain that high standard throughout the record. In fact, I would go as far as to say that the album is their finest to date and a flawless listen from start to finish.

While I’ve always been a big supporter of Dan + Shay, I haven’t always felt their albums have completely seen them realise their full potential. Obsessed have a more experimental angle to it than Where It All Began but Dan + Shay is a completely different beast. Not only have the duo more then delivered on the hits front, they’ve created a cohesive album that pushes their sound, takes risks and finally sees them properly finding their footing.

The album kicks off with the dramatic almost military drums of Alone Together, one of the five tracks made available before the full album lands. It’s a perfect bridge from the duo’s previous two records with a soaring chorus, a catchy-as-hell hook and of course Shay Mooney’s incredible vocal. From there on out variety is the order of the day as Dan + Shay push the boundaries of their sound and infuse some refreshing sounds into the mix.

Keeps You Up at Night is a laidback Blues-tinged jam, Make or Break brings out the duo’s rock influences for a storming two and a half minutes, and My Side of the Fence is a heartfelt and romantic ballad about being happy with your lot. Elsewhere on the record Speechless is a song the guys wrote about seeing their wives in wedding dresses for the first time and it’s destined to be a first dance at many weddings. Stupid Love is an uptempo number with such a joyous feel that you’ll be singing it after the first time you hear it and All to Myself is a melodic ode to spending time with the one you love and shutting the world out.

The standout track for me is No Such Thing. Unlike anything the duo has ever done before, Shay delivers a stellar vocal over an off-kilter beat effortlessly working an R&B groove into the duo’s Country sound. It’s a feel-good moment and one that further pushes the duo’s crossover prospects. I can hear the Country traditionalists complaining already but quite honestly, I’m not here for that. Good music is good music. Another highlight is Keeping Score featuring Kelly Clarkson. Matching Clarkson vocally is no easy thing to do but Shay manages and the two singers’ voices work well together throughout the stunning mid-tempo moment.

The album comes to a close with Island Time and it’s a perfect way to end things. Shay’s voice is more hushed and restrained on the verses but it soars on the chorus as Dan’s harmonies kick in. The moment the song is finished, you can;’t wait to press play and listen to the whole thing all over again.

Dan + Shay knock it out the park with their third studio album. As hard as I tried, there’s nothing here to fault. The duo is in their own lane and this is the album I’ve been wanting them to make since I heard 19 You + Me. It’s Country with a pop and R&B twist that is contemporary, memorable and demands repeat listens. The album also gives the guys plenty more hits to add to their ever-growing list and it’s going to sound incredible live. Can it just be January already so we can see Dan + Shay performing these tracks? Until then, check out our interview with the guys,