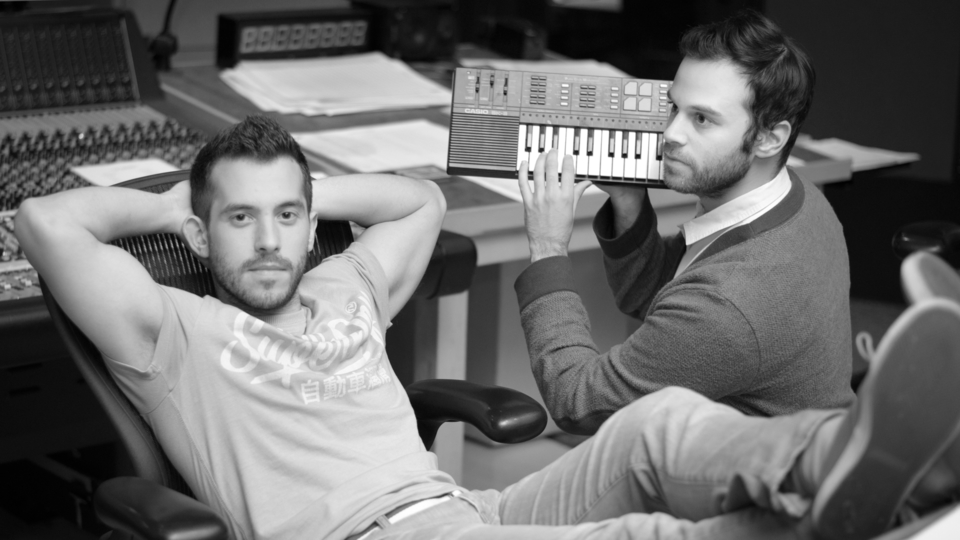 YouTube Red’s highly anticipated Karate Kid spin-off series Cobra Kai is out now. Musical composers Leo Birenberg & Zach Robinson had a chat with us about the show, how they went about making music for the project and the legacy of The Karate Kid movies.

The story of Cobra Kai is a continuation from the Karate Kid films with the story now shifting its primary focus onto the antagonist from the first film, Johnny Lawrence.

William Zabka reprises his role as Johnny, who has fallen on hard times. Set thirty years after the events of the 1984 All Valley Karate Tournament, Cobra Kai finds a jaded Johnny reopening the Cobra Kai dojo, which causes his old rivalry with Daniel LaRusso (Ralph Macchio), now a successful local business owner, to be reignited.

The composers, Leo Birenberg and Zach Robinson, utilized a 70-piece orchestra as well as choruses of electric guitars and retro-synthesizers for Cobra Kai. This created a score that combines the motifs of the original Karate Kid but with their own modern sensibilities attached.

Birenberg and Robinson actually rearranged the original score and used it as a musical motif in the series. In the interview they share their process of creating the perfect blend of hard-rock and heavy hitting modern electro with traditional Asian melodies, while paying tribute to Bill Conti’s legendary score to the original films and recount their own memories of The Karate Kid and its iconic music.

How did you first get involved with the Cobra Kai project?

In classic Hollywood fashion, we were cruising either Deadline or Hollywood Reporter and we saw an article about the show. We immediately flagged it as something that would be the right fit for us. At that time, we didn’t know what type of show Cobra Kai was going to be. We didn’t know the tone or even that Ralph Macchio and Billy Zabka were set to the reprise their iconic roles. We basically sent a blind reel over to our agent who got it to the show runners. Once we met with Josh, Jon, and Hayden, I think we all knew it was a perfect fit!

Can you recollect the first time you watched the original Karate Kid?

ZR: I was pretty young so I don’t remember exactly the first time I watched it. I do remember it being one of those “dad movies” that dads tell their kids “you GOTTA watch The Karate Kid.” Once I saw it, even as young as I was, I understood why it’s such an important movie to so many people.

LB: I have a pretty distinct memory of watching it in a basement at a friend’s house, but I don’t actually think that was my first viewing. It’s one of those movies that you’ve seen a million times but identifying that first watch is almost impossible.

What does Bill Conti’s iconic Karate Kid score mean to you?

The Conti score creates such a wonderful sonic palette to support the story. One of the first things we did was try to break down what people responded to about the original Conti so that we could incorporate the same feelings into our work. What we concluded was that it’s the color choices that really bring back the flavor of the original. Orchestra, Japanese flute, percussion: we tried to expand on all of those ideas (and add some new ones) as a launching point for our score.

Was there any trepidation in taking on a job where you’ll be reworking something so beloved?

Trepidation is probably the wrong word. The show is so different from the movies, we knew almost immediately the score was going to be pretty different too so we weren’t that worried about stepping on Conti’s shoes. We knew there were going to be times to interpolate some of Conti’s melodies into our pieces but if anything we were super excited to work with the material.

How do you balance the new with the old? The music of Cobra Kai sets a very unique but familiar tone. What were the challenges working on the series?

Cobra Kai is a very different story from the original and also a very human story. Whether we were expanding on colors from the original scores or exploring new styles, the key was to always be supporting the human emotion at stake. As long as we did that, the music felt right at home with these characters at this later point in their lives and thus kept connected with the originals. Also, with this story being told more from Johnny’s perspective, we had to come up with a new sound for him that felt at home in the KK universe, whether now or in 1984.

A project like Cobra Kai is a collaborative project but what were your personal processes for producing music for the series? Do you get to see the final scripts first to inform your direction?

We got the scripts pretty early on and that indeed helped us form our initial musical ideas. There was a lot of back and forth with the creators about the tone of the score so we spent a lot of time experimenting with what new styles we were going to introduce and what old styles and materials we were going to revisit. We settled an arena rock/hair metal influenced score for Johnny and more of a classic, orchestral score for Daniel which also served as a nod to Conti’s work.

What was the most demanding part of working on Cobra Kai?

As with most TV, the schedule was pretty tight. We were delivering ten episodes of music in about nine weeks so most of the time we were working on multiple episodes simultaneously. The final weeks of writing were probably the most challenging since we were writing for orchestra for the finale plus finishing up episodes eight and nine.

How did the experience of working on Cobra Kai differ from your past work and does being on YouTube Red affect the way you approached this project?

Every project has its own challenges. We’ve been working together for years, but any project where we join forces is going to have a different workflow to accommodate the collaborative aspects. YouTube was a terrific supporter of the show and just wanted it to be the best version of itself, which trickled down to us as a wide license to try whatever we wanted to make the best score.

Fans of the Karate Kid (myself included) absolutely love the scene in the original movie when Daniel first shows up at the school Halloween dance dressed as a shower. ‘Please Answer Me’ by Broken Edge which played during that scene was never released on single, cassette or CD. This is the only known audio of this track and the Karate Kid fan community would love to get their hands on it. Is there any way you can incorporate the track into your work for Cobra Kai?

ZR: I had no idea this was such a deep cut. Maybe we’ll end up finding a place to nod to it in the score but even better would be if the music supervisor tracked down the master!

LB: I just hope that 34 years from now somebody wants something I wrote anywhere near this badly!

Is there a specific scene (that you worked on) that you are particularly proud of in Cobra Kai?

ZR: My go-to for this question is always Miguel’s training montage at the beginning of episode 5, but I’ll actually bring up another one for this interview. I’m pretty proud of how Johnny’s first fight in the parking lot in episode one came out (its called “Strike First” on the album). This was one of the first cues Leo and I worked on and I think it helped us identify the tone of the music for the series. It was pretty fun to score Johnny Lawrence kicking a bunch of teenagers’ asses.

LB: I love the scene in the finale where Daniel and Robby are talking in the locker room before the final match. One of the emotional climaxes of the season and an absolutely killer performance from Macchio. We spent hours agonizing over how each chord landed on each frame to make sure it had the most impact.

The series has already been a huge critical and fan hit. That must be fulfilling to know that the series is so well received, and struck a real chord with audiences?

ZR: It’s an amazing feeling. It’s kind of the dream as a film composer to work on something that you know brings joy to a lot of people. We’re incredibly honored and humbled to have been asked to contribute to this really special series.

Finally, what future projects are you working on?

LB: I’m finishing an indie feature called Plus One right now and am in the middle of two different animated shows. One of them that is also very martial arts related 🙂

ZR: I’m working on a drama feature called The Hill which is quite different than Cobra Kai. It’s nice to have the opportunity to work on projects with different styles and flex different musical muscles.

In this article:Cobra Kai, Karate Kid, The Karate Kid