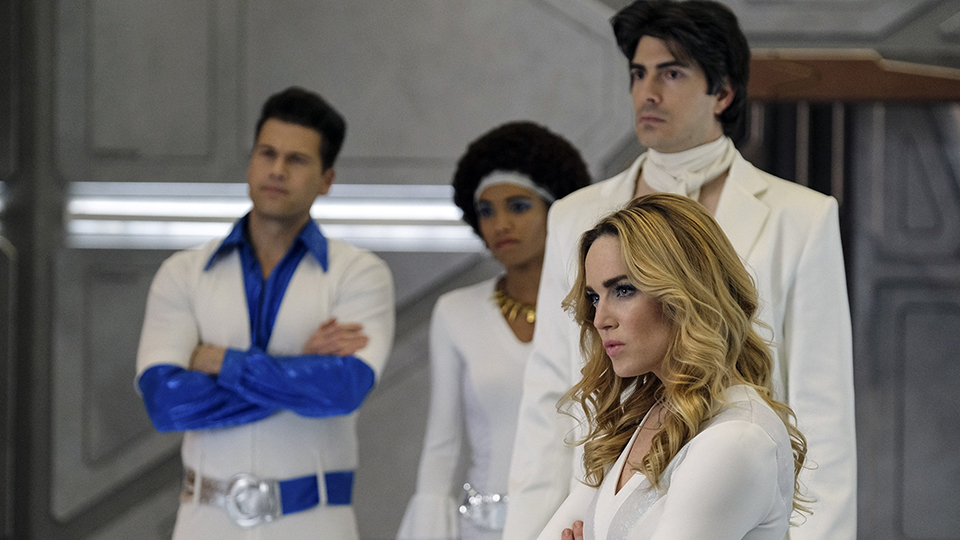 A lot went down in the season finale of DC’s Legends of Tomorrow third season and it set things up nicely for a very exciting fourth season.

If you haven’t seen the season 3 finale and want to avoid spoilers, stop reading now. Continue on if you want to know our thoughts on the next season.

The Legends combined their totems to create a giant Beebo, which went to battle with Mallus. Their efforts were successful and they defeated him, putting an end to a season of torment from the powerful demon. Earlier in the episode Damien Darhk (Neal McDonough) was killed by Mallus after freeing Nora (Courtney Ford) from the demon’s hold and after the battle Ray (Brandon Routh) gave Nora the Time Stone so she could escape from the Time Bureau after being arrested.

Following the epic battle Amaya (Maisie Richardson-Sellers) decided to go back to Zambesi and chose not to wipe her memories. Many of us thought that meant the character was leaving the show ahead of season 4 but a recently released poster for the season confirms that she will be back. Someone who won’t be back, at least not as a series regular, is Wally West (Keiynan Lonsdale) who only joined part way through season 3.

At the very end of the season finale Constantine (Matt Ryan) returned to warn the Legends, as they vacationed in Aruba, that Mallus wasn’t the only demon that was released. It’s already been confirmed that Constantine will be boarding the Waverider for season 4 and the Time Bureau’s Ava Sharpe (Jes Macallan) will also be a series regular.

While we patiently wait for DC’s Legends of Tomorrow to return, I’ve put together the 10 things I want to see next season…

2. Wally’s exit to be satisfactorily explained. It seems odd to move Wally from The Flash to DC’s Legends of Tomorrow, under use him then take him out of the show. It feels like the writers have no idea what to do with Wally and that’s a real shame. He could be an asset to the Legends if he was written better and given more to do.

3. An encore for Nora. It feels like the show is setting things up for Nora to return and her bond with Ray suggests she could even be reformed if she does. Nora’s knowledge of Mallus proved helpful during season 3 so don’t be surprised if she has intel on the other demon(s) that has been released.

4. Amaya’s return to the team to make sense. I felt the writers handled Amaya a little badly during season 3. Her desire to go to Zambesi was cited time and time again so it seems a little odd that when she achieves her goal, she then decides to rejoin the team. The only way I can see it panning out is if the demon unleashed threatened Zambesi or Amaya’s future.

5. Constantine to be properly integrated into the team. Often on Legends a new character is thrown into the mix and no time is taken to actually make sure they fit in with the team. Wally just turned up and Zari (Tala Ashe) joined pretty randomly too. Constantine is a big character who already has a following so I hope they do the character justice.

6. Sara (Caity Lotz) to be affected by the changes that happened on the Arrow season 6 finale. In case you don’t watch that show, Sara lost her father Quentin (Paul Blackthorne) in the season finale and discovered that he had been bonding with Black Siren (Katie Cassidy). There’s more story to be told there in terms of how Sara copes with her father’s death and how she reacts to having effectively a replacement sister in Star City.

7. Character development for Nate (Nick Zano) and Zari. Nate has been defined by his relationship with Amaya and Zari hasn’t had all that much to do aside from be available to fix the ship. Both characters bring humour to the show and I feel there’s more to explore and discover with them.

8. Ava and Sara’s romance to be a supporting storyline. Both of these characters are badass and together they’re brilliant. While their romance is sure to go through another rollercoaster in season 4, I don’t want that storyline to define them. What I’d rather see is the power struggle that will happen now Ava is head of the Time Bureau and Sara frequently has to go against the rules to achieve her mission.

9. Mick (Dominic Purcell) to actually get something to do. He’s the most under-used character in the show and that’s a shame because he often provides a bit of comic relief. Since Leonard Snart (Wentworth Miller) was killed off, it feels like Mick has been at a loose end so I want better writing for this character.

10. A return, no matter how small, for Firestorm. It was great to see Jax (Franz Drameh) in the season finale but I’m really missing Dr. Stein (Victor Garber). Even if it’s for the annual crossover or a one-off episode, I’ld love to see them both back at some point in season 4.

DC’s Legends of Tomorrow returns for season 4 on The CW in the US and Sky 1 HD in the UK later this year.