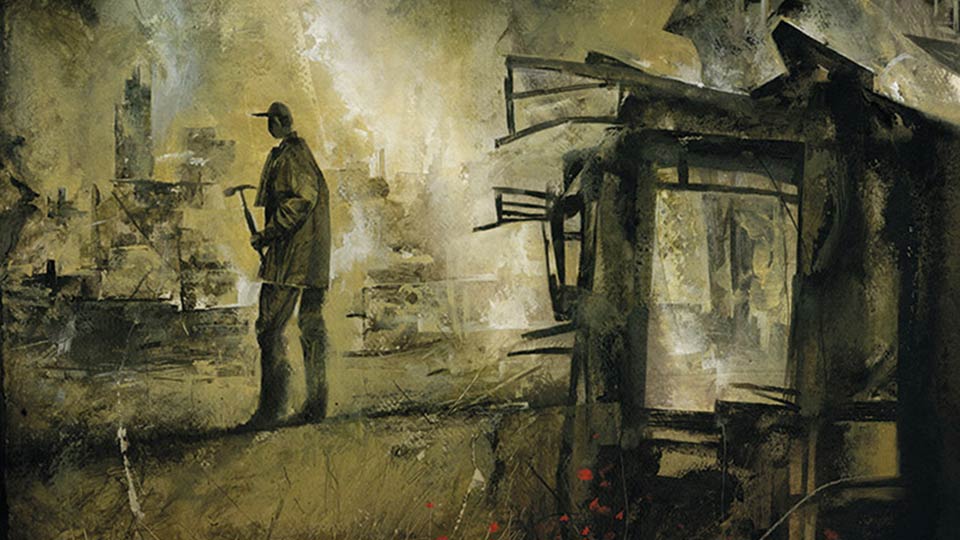 Richard Matheson – I Am Legend review

Richard Matheson’s 1954 apocalyptic horror/science-fiction novel I Am Legend gave plenty of original ideas to the genre, and inspired many great books and films of the zombie/vampire niche. It’s now released in a collector’s edition by The Folio Society.

Robert Neville is the last human alive, to his knowledge. I Am Legend follows his daily life in Los Angeles, spending the daylight hours when the ‘vampires’ are comatose boarding and protecting his house, using garlic and mirrors to keep the nocturnal attackers at bay. He’s created a mural and hooked up a generator, and has looted not just food and drink but records and books from now-disused stores. He’s also developed techniques for killing the vampires in ways that ensure they stay dead. But how long can he survive, or even want to survive, when trapped in a post-civilisation life that has no prospect of improving?

The emotional impact of Matheson’s book derives from its unflinching honesty in examining the human condition. Robert Neville is painted as no great hero – just an ordinary man who is trying to survive extraordinary circumstances – but his plight, and the psychological scrutiny of the protagonist by the author, are relentlessly compelling. Neville is prone to depression, taking solace in heavy drinking, and he often has sexual fantasies about the female vampires that he encounters. When, finally, he achieves company, he is full of distrust. The believability of Neville is what makes I Am Legend so terrifying.

Balancing this honesty with a positive view of the human condition, Neville also studies the origins of the disease that has turned the human race into feral vampires as a distraction from the solace of alcohol, replacing a thirst for self-destruction with one for knowledge. It’s another credible motivation, and one that keeps the reader hooked on Neville’s thought processes.

As the book unfolds, I Am Legend raises further ugly truths about humanity, such as our incessant need to eradicate difference and destroy members of other tribes, and to dehumanise those we dislike. It does so through drip-feeding revelations in a simple but finely-balanced plot. It’s not a book that makes you feel good about yourself, but it asks much more profound questions than you may expect from stories of this genre.

The observations about the human condition are punctuated by some passages that are truly memorable. Neville’s encounter with a dog is a sublime case in point. Too scared to come and take food from him at first, Neville slowly builds up trust, craving companionship and warmth from the only other living creature he has found. Matheson’s description is masterful. Another moment of literary brilliance is the flashback to Neville’s family life before the plague, and the horrifying account of the death of his wife, which is truly the stuff of nightmares…

Matheson writes with great economy, and I Am Legend is a relatively short book. But the author makes sure that every word counts and every sentence has earned its place. Taut and well-plotted, I Am Legend keeps the reader in the world of its main character and builds to a final fifty pages that are exhilarating and almost unbearably tense.

There are a few questions of logistics that nag: supplies of food and drink would eventually dry up, even from well-stocked supermarkets, and more acutely, fuel for the car (a vehicle that keeps going in spite of no maintenance for years) would become difficult to acquire. Although not impossible, it stretches credulity that Neville’s daily activities could sustain over a period of years. But the world of Robert Neville, which the intense and focussed plot never wavers from, is too credible for such considerations to break the spell.

Those who enjoy a spot of scientific rationale behind grand horror ideas will find plenty to ‘get their teeth into’ in this story. The bacterial origins of the vampirism disease are explained, as well as the creatures’ aversion to light and garlic. We were especially amused by the play on the crucifix folklore: here vampires only respond negatively to religious symbols of the faith they adopted during life. Thus Neville’s Jewish neighbour, Cortman, proves a thorn in his side…

I Am Legend is also an interesting crossroads – whilst Matheson describes the monsters as ‘vampires’ and they have many of the same features and vulnerabilities as those dating back to Bram Stoker’s Dracula, their lack of agency, hunger for human blood and feral nature are much closer to what we expect from ‘zombies’, and it’s clear how, in providing further medical background to vampirism, Matheson inspired the horror genre to branch into a completely different direction. You can trace the line from I Am Legend right through to The Walking Dead.

The Folio Society’s edition of I Am Legend is illustrated by celebrated artist Dave McKean (who also worked on The Folio Society’s American Gods). Everything from the cover of the book, depicting a vampire (could it be Neville’s wife?) as described in the pages to the single and double-page paintings of key moments in the book accentuate the overall tense and frightful events of the book. McKean’s use of dark greens is suitably nauseating and unsettling, and his depiction of Neville (broken man rather than hero) chimes with the author’s characterisation.

Presented in cloth-bound hardback with brown card-slip case, and printed on quality paper to high specifications, this version of I Am Legend is a feast for the senses. You’ll also find an introduction by comic book writer and novelist Joe Hill – the son of horror maestro Stephen King.

Greg Jamesonhttp://www.gregoryjameson.com
Book editor, with an interest in cult TV.
Previous article
The King and I comes to the London Palladium with previews from June
Next article
Soap (Underbelly Festival) review