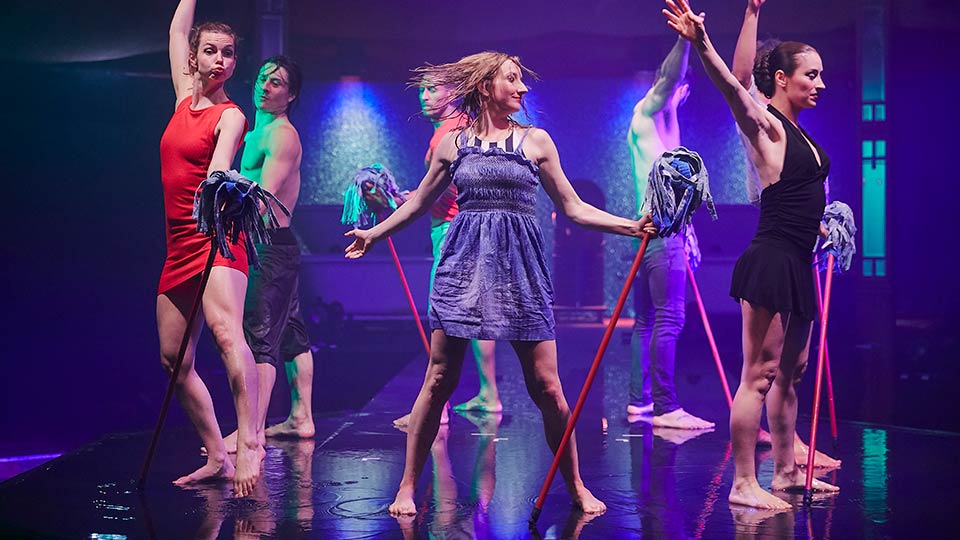 Ever wondered just how creative you can get with bathtubs? Me neither. Nevertheless, the cast of Soap, the Underbelly’s latest circus revue, puts the limitations of rolltops to the ultimate test.

Set in and around a number of tubs, the slick 70-minute show boasts some seriously talented performers and stunning choreography, alongside a few disappointingly run-of-the-mill moments. A cheeky ballet to Swan Lake featuring three towel-clad hunks feels old hat, while a juggling act, albeit stupendously talented, has a distinct ‘seen it all before’ air about it.

Vanessa Alvarez delivers one of the production’s brighter moments as she swaps plate-spinning for towels, masterfully juggling four rotating towels – one for each limb. There’s also some wonderfully intricate choreography in a tight, seamless three-hander.

The star turn comes from Anton Belyakov, who majestically works every inch of the bathtub in spectacular fashion. The breathtaking athleticism is buoyed by an innate showmanship, which really raises the bar. The fact that Belyakov is drenched with water for the entire performance (which often makes its way to the first few rows of punters – be warned) just adds to the supreme display of skill.

Light relief is provided by operatist Jennifer Lindshield, who raises a wry smile as she gives lyrics of popular songs a soapy twist. Marie-Andrée Lemaire adds to the humour, with a charming display of foot puppetry. The comedic touches jar slightly with the show’s tone – not quite sure if it wants to be a steamy soiree or family-friendly circus.

It’s testament to the strength of the Underbelly’s superb programming, with the likes of Briefs, Barbu and La Soiree setting the standard impossibly high, that Base Berlin’s Soap flounders rather than fizzes. However, with the most flexible cast in town and just enough surprises and feats of wonder, Soap is a welcome, if forgettable, addition to London’s Southbank.