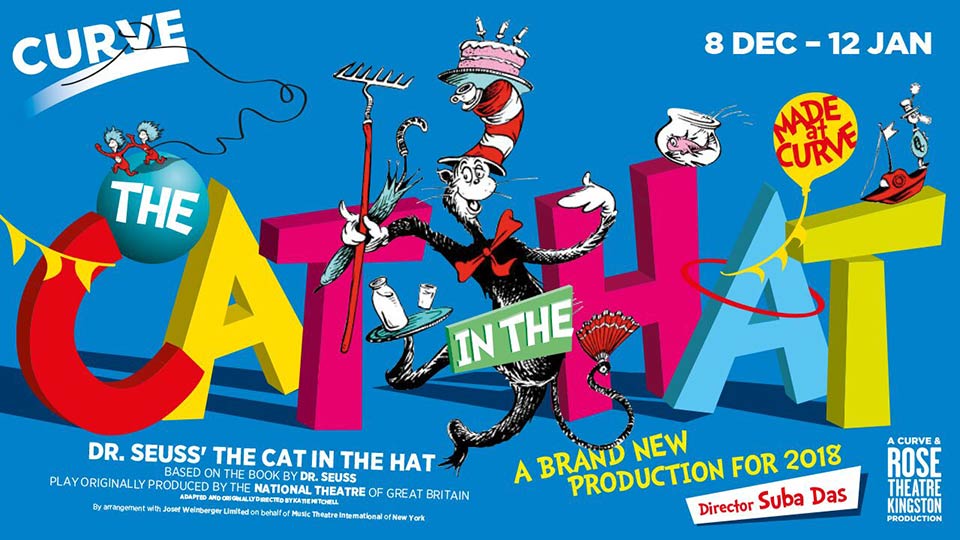 Curve Theatre in Leicester have announced that their 2018 Christmas show for children and their families is a brand new production of Dr. Seuss’ classic story of mischief and chaos, The Cat in the Hat.

The Made at Curve production will be directed by Curve’s Associate Director Suba Das and run in the theatre’s 300-seat Studio from 8th December 2018 to 12th January 2019.

When the Cat in the Hat steps onto the mat, Sally and her brother are in for a rollercoaster ride of havoc and mayhem! The Cat can rescue them from a dull rainy day, but what mischief do they get up to along the way?

Following the success of their previous work for children including Roald Dahl favourites The Witches and most recently George’s Marvellous Medicine, The Cat in the Hat will see Curve and Rose Theatre Kingston come together once again as co-producers.

Speaking about the production, Curve’s Chief Executive Chris Stafford and Artistic Director Nikolai Foster said: “We are positively purring with pride to announce what is sure to be another superbly playful Made at Curve production for young folk, their families and school children this Christmas. Christmas at Curve is always special and Dr Seuss’ wonderfully mischievous story of The Cat in the Hat has entertained children around the world for generations. We are thrilled our Associate Director Suba Das is charged with wrangling the anarchic cat, joined by a purrfect production team, featuring Tasha Taylor-Johnson’s whiskerful tunes and tail-defying circus-inspired moves.”

Curve will also be creating a number of workshops for schoolchildren to accompany the zany production, encouraging young people to creatively explore the show through physical theatre, reading, writing and dramatic activities.

Casting and tour dates will be announced in due course. Tickets for The Cat in the Hat will go on sale to Curve Members today, followed by general on sale on 1st June. Tickets can be purchased online at www.curveonline.co.uk.

Advertisement. Scroll to continue reading.
In this article:Curve Theatre, The Cat In The Hat