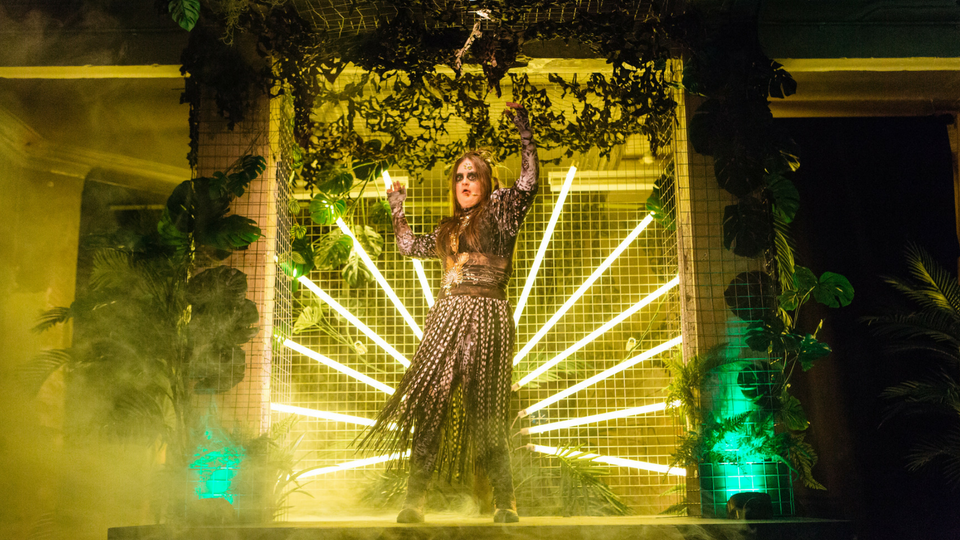 Imogen Roberts as The Goddess

When theatre does what it’s supposed to, it has the ability to transform emotions, shift perceptions and become a window into the souls of characters who have the power to connect with the audience in a way that only true creativity allows. Access All Areas is a company that is driven not only by urgent purpose but immense creativity and  professionalism that highlights why our creative industries are renowned as some of the best in the world.

The company’s latest work, Madhouse Re:exit, is an examination of the history of social care told from the experiences of living in 2018 society as an adult with learning disabilities. Currently touring in Manchester as part of The Lowry’s Week 53 Festival, the production (directed by the multi-talented Nick Llewellyn) is a magical cocktail of collaboration, personal story-telling and a high-tech Black-Mirror-esque immersive theatre experience that manages to be arresting, claustrophobic, disturbing and liberating and beautiful, all at the same time.

I didn’t think I’d be putting those words together into one sentence. But, this theatre company has taken on a mighty challenge and won – by re-telling the horrendous history of the social care system through the eyes of actors all-to-familiar with the state’s grasp on their individual identities. Except here, the powerful creativity of the artists doesn’t just own the way the story is played back to us as immersed audience members, but it demonstrates a powerful activism and rejection of state-enforced failings – brought about by the tragedy of ignoring the individual – and not fearing the consequences it brings.

Devised pieces by these actors allow us to enter the world of Paradise Fields – an immersive launch event for a social care facility that describes itself as a ‘cutting edge, minimal intervention, truly modern care facility’. We are met by Sandra, a character who sets your teeth on edge like too much candyfloss or freezing-cold Neapolitan ice-cream, played by Francesca Burgoyne, whose performance immerses us from the get-go. But, this isn’t a just a vision of a dystopian future, this is a 2018 representation of a history of creating an enforced purgatory for adults with learning disabilities  – borne out of real-life testimonies and reports, specifically, by Mabel Cooper. Mabel was a former resident of long stay hospitals, institutionalised for decades simply just for being born out of wedlock, who was eventually released and who became a campaigner to close them down. Eventually, she pressed the button that blew up one of the hospitals she had lived in.

This piece of theatre is a plea for small-scale, person-centred care, something that seems incredibly distant under the current Government. Through the dark depths of Barton Arcade’s vaults we are taken between sickly pink and turquoise decorated corporate waiting rooms, where we’re presented with sugary lime green and cherry pink cocktails against a Miami colour palette of palm trees starkly contrasting with dark, crumbling, damp tunnels and faded corridors. We receive a  fractured and deliberately confused narrative that disorientates us, around the plight of Patient 36 (named by cast member David Munns as a reference to The Prisoner series). All credit to the actors from Salford-based companies DIY Theatre and Proud and Loud who were the glue in this production, enabling us to pause for much-needed reflection. We feel lost in the system.

DJ Hassan as The Bird

David Munns’s piece, ‘The Escapist’ gives a real sense of anarchy to proceedings with a sinister yet sincere exploration of the constraints of today’s society. An illusionist by nature, he reminds us there’s no magic money tree when it comes to being free in our society.

DJ Hassan shows he’s a rare talent as he takes the motif of a caged bird for his complex and moving portrayal of feelings of being trapped, freedom, self-awareness and control. His phenomenal dance choreography conveys the mirrored lives between caged birds often found on wards where residents were locked up for life.

Dayo Koleosho’s piece is centred around the audience being made to throw food in a controlled environment (based on historical quotes made by a politician) which, due to a thoughtful and impactful delivery allowed for a power-shift where Dayo’s words take complete control, delivered like a true statesman with the audience eating out of his hand.

Dayo Koleosho as The Eater

One of the most moving moments was meeting The Goddess, devised and performed by Imogen Roberts, conveying empowerment, exuding femininity and a ferocious thirst for respect. Spectacular staging and choreography created an intimate connection and depth of performance.

Finally, poet Cian Binchy provided the most memorable line of the evening, ‘The Government do not care about us. Because the Government are not scared of us’. Housed in an adult cot, Cian’s piece portraying an assured and subversive giant baby was a stark revelation of society’s inability to view adults beyond childhood if they have  a learning disability. Kat Bond, a class act, deserves a mention here, who plays on the role of Shirley, unpacking the deeply warped motivations of the human condition when placed in a position of control and power. She’s a terrifically talented and confident performer who always surprises and delights.

Cian Binchy as The Baby

In this article:Manchester, The Lowry Theatre, theatre