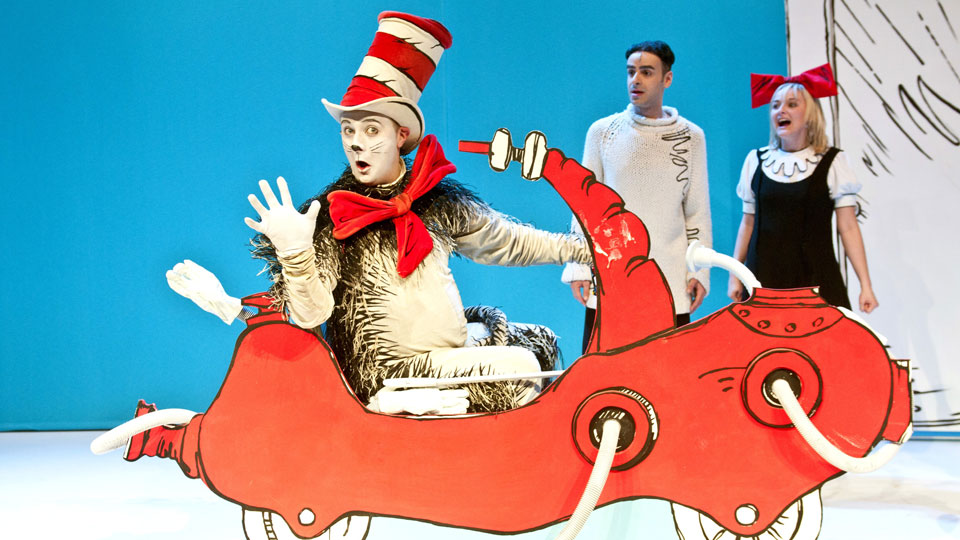 Katie Mitchell’s acclaimed stage adaptation of Dr Seuss’s The Cat In The Hat will embark on its first UK tour in 2015, opening at Aylesbury Waterside Theatre on Thursday 29th January.

The 2015 tour will visit 30 venues across the UK, as well as playing a short run in Bahrain in January.

From the moment his tall, red-and-white-striped hat appears around the door, Sally and her brother know that the cat in the hat is the funniest, most mischievous cat they have ever met. With the trickiest of tricks and craziest of ideas, he turns a rainy afternoon into an amazing adventure. But what will mum find when she gets home? Based on the much-loved book by Dr Seuss, The Cat in the Hat is a lively and engaging first theatre experience for young children aged 3+.

This new production is directed by Lillie Collier, designed by David Shields and produced by Paul Taylor-Mills Ltd. It is presented through special arrangement with Josef Weinberger Plays Ltd on behalf of Music Theatre International (MTI).

Further dates to be announced.

In this article:The Cat In The Hat