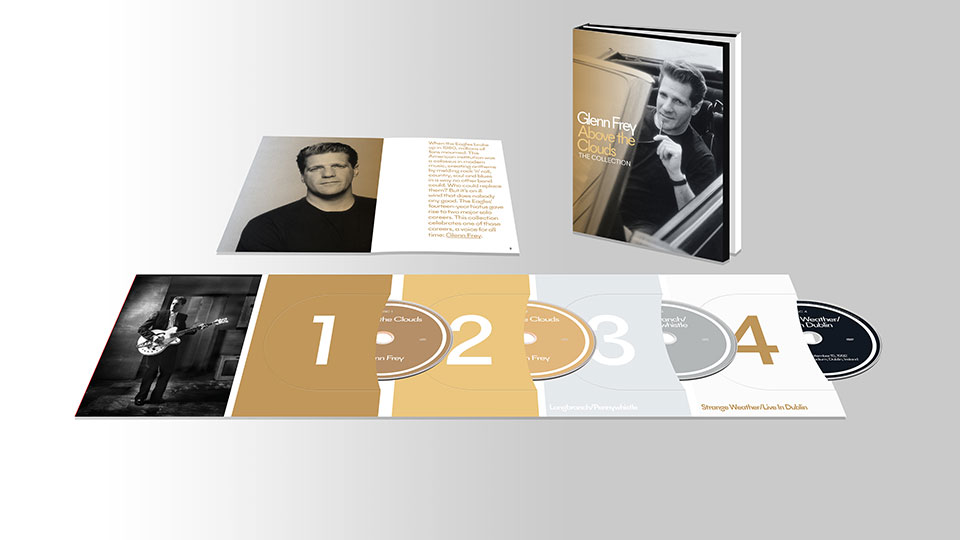 Singer-songwriter Glenn Frey passed away in 2016 but he left behind an incredible body of work that spanned an incredible 6 decades. During that time he found fame as a founding member of the Eagles, he had a successful solo career and he spent a short amount of time in a duo with JD Souther known as Longbranch / Pennywhistle. Just over two years on from his death, Frey’s work outside of the Eagles is being celebrated with the release of four-disc set Above the Clouds: The Collection

Featuring 3 CDs and a DVD, Above the Clouds: The Collection is the definitive selection of Frey’s career highlights. Each of the 3 discs is themed – the first is The Very Best of Glenn Frey, the second explores Frey’s work away from the charts and the third is the only album he released as part of Longbranch / Pennywhistle. There is also a one-disc version of Above the Clouds: The Collection available which features only the first disc.

For most people Disc 1 is going to be the one that they’ll want to add to their collection. It features 14 of Frey’s biggest hits along with a live version of the Eagles medley Lyin’ Eyes / Take It Easy taken from a performance at the National Stadium in Dublin in July 1992. The CD kicks off with the uptempo The Heat Is On, Frey’s biggest solo hit, which was taken from the Beverly Hills Cop soundtrack. As you listen through the disc, you realise just how much of a musical chameleon Frey was. 1985’s You Belong to the City is a classic slice of 80s pop, 1991’s Part of Me, Part of You recalls his time with the Eagles, and a cover of Randy Newman’s Sam Girl from 2012 showcases a more lounge-jazz sound.

It’s fair to say not all of the music here has aged brilliantly. 1984’s Sexy Girl is a cringeworthy moment both lyrically and topically, while 1982’s The One You Love could easily be mistaken for a Kenny G classic until Frey’s gentle vocals kick in. Obviously what sounded good nearly 40 years ago, isn’t going to sound current now but those two tracks in particular had me reaching for the skip button.

Disc 2 compiles 16 lesser-known tracks from across Frey’s career starting with Let’s Go Home, taken from his 1984 album The Allnighter. Highlights on the disc include covers of Brian Wilson’s Caroline, No and Bobby Troup’s Route 66. Elsewhere the disc includes the rock ‘n’ roll jam Better in the U.S.A., the instrumental Rising Sun and the beat-driven Brave New World from 1992 album Strange Weather.

Longbranch / Pennywhistle’s only album is disc 3. Personally I think that one’s for hardcore collectors only. The disc is perfectly listenable to but it doesn’t break any new ground for the time it was released. It clearly took inspiration from other bands at the time with Rolling Stones and The Beatles coming to mind. There are some solid moments through such as the catchy Run, Boy, Run and the infectious and funky Lucky Love. The album has been remastered for inclusion here.

The fourth disc in the collection is a DVD that captures a performance by Frey at the National Stadium in Dublin in July 1992, during the midst of his Strange Weather tour. This disc wasn’t provided in our review copy but we’re pretty sure it’s a must-have for any of Frey’s fans.

Above the Clouds: The Collection is a mixed bag but for fans of Frey it’ll be an essential purchase. For me the greatest hits on Disc 1 are the best representation of Frey’s work. I was less hooked on the second and third discs but if you like to dive into deep cuts than it may be your thing. Above the Clouds: The Collection shows the breadth and impact Frey had on music and he has definitely left an incredible legacy behind.

Advertisement. Scroll to continue reading.
In this article:Eagles, Glenn Frey