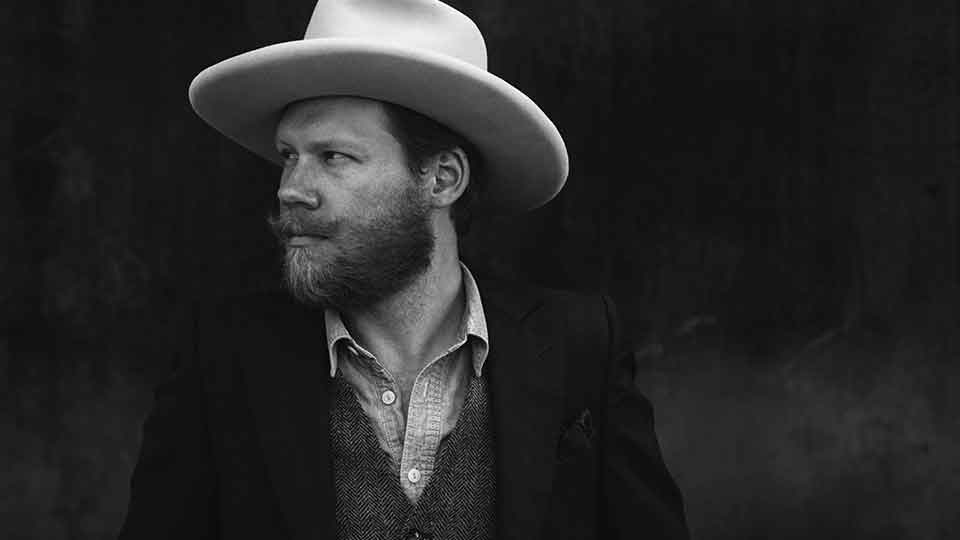 Originally from Waco, Texas, Jarrod Dickenson now spends most of his time out on the road playing his rich, soulful brand of Americana.

Although he’s been performing in the UK for a while, Jarrod came to widespread attention here when he performed at Country to Country Festival in 2017, winning over legions of new fans. He released his latest album, Ready The Horses, in September and followed it with a sold-out UK tour, including two shows at St Pancras Old Church.

I spoke to Jarrod as he kicked off his latest visit to the UK, supporting Don McLean on his current tour. Read on for more about what to expect from his set at Black Deer Festival, his writing process and his latest single Your Heart Belongs To Me, a duet with his wife Claire.

You’re currently out on tour with Don McLean – how’s that going?

Yeah, it’s been great so far. Last night was the second night – we were in York at the Barbican. We’ve toured with Don once before in 2015 in Ireland and in mainland Europe, so when he invited us back out to do this run we were obviously over the moon and happy to do it. So it’s off to a great start.

And then in June you’re playing Black Deer Festival. What can people coming to see you there expect?

Yeah, that’s gonna be a great time. We were thrilled to get that invite – it looks like an absolutely brilliant festival, great line-up. And for us, we’re gonna go all out. We’re gonna bring a big band out, try to make it basically just like my record with bass, drums, Hammond organ, horns, the whole bit. So it should be a nice rocking day.

Do you find that you get a different response from festival crowds compared to other shows?

It’s definitely a different atmosphere. You do have to approach it in a different way for a variety of reasons. Y’know, you’re not in a more intimate club environment – it’s usually an open air, big field, sound is gonna be different. In a festival situation there’s rarely a sound check [laughs]. You kind of rush up, plug everything in, ‘yep, works, OK, go!’ But in some ways I think that adds to the energy and the excitement. As far as the crowd goes, from my experience if they’ve bought a ticket and they are invested in being there and experiencing it, they’re kind of already on your side. They’re already up for it, they’re already ready for a good time and to hear your music. So it’s a very welcoming environment.

What keeps you coming back to the UK?

Well, a few answers, I guess. The most obvious is that people keep coming out to gigs [laughs]. Yeah, we’ve been fortunate in the last few years to build up an audience here and have a really great fanbase that are incredibly supportive and come out to gigs. We’ve just sort of found a musical home here, which has been amazing. And the other obvious reason is my wife’s from Belfast and so we have family on these shores now, both in Belfast and in Edinburgh. But yeah, we get to come over and tour and have a great time doing that, visit the family. So yeah, full of good reasons to be here.

Your latest album Ready The Horses came out over here last year – were there any songs on that record that were particularly easy or difficult to write?

Well the songs were kind of written over a couple of years of touring, and most of them had been pretty road-tested by the time we went into the studio, which is kind of how I like to do it – introduce songs into the live set before going into the studio, to see what works and what doesn’t. As far as easy to write, difficult to write, they’re all different but all of them kind of came together in their own nice ways. Like Nothing More, which is one of the later tracks on the record. It’s one that I wrote with a good friend of mine called Seth Walker, and it’s a song that we started when I was living in Brooklyn in a tiny basement apartment where you basically had a chair and a bed and that was it.

We started writing it there, and Claire my wife was also in the apartment, so it was too busy for three of us to be in one area. So Seth and I went up to the rooftop and continuing up there, and then other people from the apartment building came up and started having a party, and we thought ‘oh boy we’ve gotta move again’. This time we went all the way out to the stoop and just sat on the stoop outside, and then a couple of other neighbours walk up and finish walking a dog and having a chat, and we’re thinking ‘Oh man, we can’t win with this!’ [laughs] ‘We can tell we’re onto something but we just can’t find a quiet spot’. So that one was difficult just in a logistical sense. But yeah, most of them… a good amount of elbow grease went into them, but no lives were lost in the process.

Yeah, like I say every song is different and they all seem kind of like a mystery. After writing one – I don’t know if other writers feel this way but I always get the feeling like, ‘oh my God, I’ll never write another song!’ And then something’ll happen, whether it’s the next day or four months from then, and you’ll get a little idea. For me it usually starts with a story idea and I’ll try to build kind of an outline of where I want the story to go, and then the music generally follows, or at least will come after the initial idea of what I want the song to be about. They sort of accompany one another as the rest of it is being written, but for me it’s always subject matter first.

The album has quite a variety of styles – was that something you consciously wanted to do or did it evolve that way?

No, for me personally I don’t like all of my songs to sound the same. I know that makes it more difficult to market and more difficult to sell in some ways, but all of my favourite records – every track is very different, and there are different genres within an album. You listen to a Paul Simon record or a Beatles record or Tom Waits, and every song has its own unique identity and tells its own story and has its own feel or groove. So that’s certainly something I try to do with all of my albums, and Ready The Horses was certainly no different in that respect.

You’ve just released the video for Your Heart Belongs To Me – can you tell us more about the song?

Well the song was one that I wrote also in that same tiny Brooklyn apartment. At that particular moment Claire and I were still just dating – we were dating long distance, New York to Belfast. I wouldn’t say it’s an autobiographical song necessarily, but I do think it was certainly influenced by where we were in our own relationship. The song is sort of hinting at the fact that the only thing that matters in a romantic relationship is getting to spend time with one another -all the rest of it is kind of unnecessary – and that’s definitely what we were working to achieve, just to be with each other. So it’s definitely a song for us, if it’s not necessarily about us.

As I was writing it I kind of always heard it as a duet in my head, but at that point Claire hadn’t really let on that she could sing [laughs]. It was a year or two into our relationship that she just out of nowhere started harmonising with me one day. I was saying ‘where have you been hiding that?’ And slowly convinced her to come up on stage, and after a while I convinced her to sing the female part of that. So it very quickly became a favourite of ours and a crowd favourite at every gig and kind of a special moment every night. So once it came to make the record we knew that’s how we’d do it.

Yeah, keep touring. After this run which ends with Black Deer Fest in late June we’ll head back to the States, do a bit of touring over there, and then it’s looking like we’re coming back to do a headline run and possibly a couple of other festivals around September. So that’s kind of what we’re planning at the moment.

Will there be any new music this year?

It’ll be a little further down the road. I’ve definitely been writing the next record – I’d say I’m three-quarters or more finished with the writing side of it, which is nice, and we’ll definitely be road-testing a lot of those songs over this tour and the next. But we’ll definitely still be promoting Ready The Horses through the end of the year.

See Jarrod in the UK on the following dates: