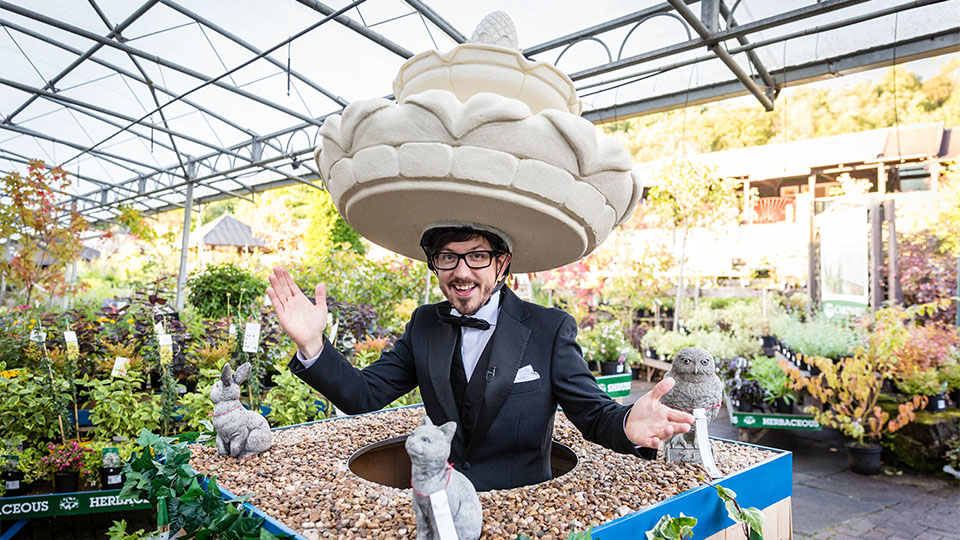 In a playful prank style reminiscent of legendary Saturday night family TV shows such as ‘Beadle’s About’, wherever you are, whatever you’re doing, BBC1’s Ready Or Not has a team of game show hosts are ready to surprise anyone – anywhere (in the UK)!

The show’s voiced by primetime fave Paddy McGuinness as he talks us through the antics of a multitude team of familiar-faced presenters – including Crumpet, the talking dog – who are ready to pounce on startled shoppers before hitting them with a series of questions in exchange for anything from £10 to £1000. I’m left pondering what the collective noun for a group of game show hosts should be – A glitz? A cache? A prize? Answers on a postcard, please.

Sorry to disappoint but Crumpet the talking dog was having a ‘ruff’ week (come on…) so we couldn’t send him any lead-ing questions (I’ll stop)! Instead, Entertainment Focus were treated to a three-way (conversation) with comedian Tom Allen, 34, who’s been busy surprising people from behind with a glamorous set in the middle of busy shopping centres, the vivacious comedian and Funny Women winner (2009) London Hughes, 28, whose challenge involves springing riders at London’s Orbit slide screaming a list of answers before they hit the bottom, and top sketch comic Matthew Crosby, 38, who’s been busy popping up through tight holes – the middle of a table in a crowded restaurant or even masquerading as a bowl of bananas – in order to quiz unsuspecting members of the public. It sounds bonkers because it is – and that’s what Saturday Night TV should be about!

First up, we spoke to So You Think You’re Funny winner (2005) Tom Allen who’s touring the UK making theatre crowds guffaw from Spring – Autumn – you can find all his tour dates at www.tomindeed.com – after you’ve continued reading this interview, of course.

This is a very exciting new BBC show, Tom, and it seems that you’ve got the biggest wad (of cash to give away), is that correct?

“I’ve never done anything as camp as a game show, and it’s true, I do have the biggest set, complete with glitter, and the prize is £1000. We’ve met lots of fun people all over the country. Some of the contestants are a bit shy at first so I just shout at them more and they respond. It’s done during the day so people are unsuspecting, it’s lovely to see their reactions.’

Tom, your segment of the show is called ‘Don’t Panic!’ but what makes you panic off screen?

‘I don’t panic often, I’m usually quite a calm person, but I become animated at public transport disasters. I get very angry and then people recognise me off the telly and once they’ve asked me for a selfie I can’t stay mad.’

You aren’t quitting stand up now you’re a glamorous game show host, though, are you?

‘No, I’ve been doing stand up now for 13 years. I’m touring at the moment so well used to traveling the country. I love doing tour shows and talking to people in the audience. It’s very similar on Ready or Not only I get to give them money which is great!’

So is it a bit like ‘Beadle’s About’ meets Fifteen to One?

It’s a bit more modern than Beadle’s About, the surprise element is the only similarity. People enjoy watching when they can sense the authenticity. There’s no fancy lights but obviously I insisted we threw in a bit of glitz.’

What were your biggest influences on TV growing up?

‘I am glad this show’s capturing the mischief of Saturday Night classics like Noel’s House Party and iconic family programmes like The Generation Game. I loved watching Larry Grayson as host. It’s great to be silly with the contestants rather than make fun of them. There’s no making people feel silly or under pressure, it’s fun but not humiliating for the guests.’

Next, we spoke to Matthew Crosby, the beardy, bespectacled third of comedy sketch troupe, Pappy’s – if you haven’t heard of them or their podcast ‘Pappy’s Flatshare Slamdown’ then WHY NOT?

Matt, is this your first appearance on BBC1 Saturday night primetime?

‘This is actually my second. A few years ago I did a show called Animal Antics. I was dressed as a dog called Sparky while Tim Brooke-Taylor read out animal news in a serious way. Now, I’m hiding under tables with flowers strapped on my head waiting to leap out on unsuspecting members of the public. It seems the more mainstream you go the wackier the ideas are! So, yes, Ready or Not is my second bite at the cherry. Maybe one day the BBC will let me host something without covering me up first.’

How long were you having to hide before revealing yourself – were you worried you were going to get caught out?

‘Yes! I was sat under the restaurant table for a good twenty minutes. I had to stay stock still as if I moved the flowers would move and give the game away. I kept hoping the women wouldn’t kick me and realise. I had an ear piece in underneath my crash helmet with the producer ready to count in 3…2…1… but there were several false starts. I was about to leap out then one of the women suddenly got up to go to the loo! It’s about holding your nerve and it’s great to catch the live reaction because it’s the last thing they expect.

Did you worry that someone could react in a violent way and lamp you one?

‘I suppose we were surrounded by cutlery so someone could’ve pronged me in the eye with a fork! We filmed the water fountain episode in a garden centre in Glasgow and the first person I had to surprise was a big, broad Glaswegian bloke. His fight or flight mechanism kicked in and, weirdly, rather than lamp me, he ran away and left his poor mum stood there alone!’

I know you’re not exactly a guy of huge stature but you must’ve been really cramped?

‘It isn’t really comfy but they say pain is good for art. It’s worth it as it’s so much more fun when the public don’t suspect a thing. It’s a testament to the crew on the show that no-one spotted what we were up to.’

You seem to really enjoy being involved and making it fun for the audience. Who were your influences / favourite game show hosts to watch when you were growing up?

‘I really enjoy the game play more than I thought I would, asking the questions back and forth, you really want people to win the prize. It’d be nice to do it one day without crouching! I used to love watching Bruce Forsyth and Jim Davidson host The Generation Game. I actually really enjoyed Big Break too, even though I never watched snooker. If I hadn’t seen John Virgo’s trick-shot on a Saturday night my weekend wasn’t complete. There were great shows like Channel 4’s Don’t Forget Your Toothbrush with Chris Evans which had a madcap crazy energy. Which is one of the things I love about Ready or Not because it’s really bonkers in a fun way. It’s very warm. Comedy can sometimes be mean or cruel for laughs but this is a prank on the public which gives them the chance to win money. If anything, I’m the victim in the scenario. I’ve learned that it doesn’t matter how much of a shock you give someone if they’ve the chance to win £100 afterwards, all is forgiven!’

Next we caught up with top writer and comedian London Hughes, 28, who’s got her sights on cracking the USA and has already been snapped up by an agent… #KeepLondoninLondon campaign, anyone?!

London, the Orbit slide looks terrifying. Did you dare go on it?

‘No way, I refused to go on the slide! I’d abseiled down for charity in the past, really slowly, and it was the worst thing I’ve done in my life! It’s taller than the Statue of Liberty! All the contestants were really up for it, though. For £10 a question they were really going for it! Think one person one about £150 so it’s not bad for a couple of minutes’ work.’ You think of Saturday night game shows in fancy studios but I love that this is the game show that comes to you.

Is this your first time on Saturday night prime time telly, are you excited?

‘It is my first time – you barely see black women in that slot and it’s wrong. There should be more women in entertainment and comedy, it’s so hard for women. Especially black women so I’m glad to be doing anything to help and try to be seen. I’m so into entertainment. At university I did TV studies and then I got sacked from a job at TGI Fridays, so I went to an open mic comedy show in Soho instead. The following week I was up there performing. I just did it because it was fun – I have to thank TGI Fridays for sacking me or I wouldn’t be here today!

That’s an incredible rise to fame. So had you always dreamed of being in comedy or on TV?

‘Absolutely. You see a lot of white men having fun on TV – it’s time for girls to do it too. When I was 13 I wrote out a treatment for a Saturday night TV show. Yeah, I knew what a TV treatment was even at that age. It was like Kumars at No.42 meets Noel’s House Party. It would’ve been really good! I used to love watching Gladiators, Don’t Try This At Home – Davina McCall’s a hero – and Blind Date or Surprise Surprise with the legendary Cilla Black. We used to have some killer shows on Saturday nights but it seems TV companies seem to put too much on the brand of personalities now. It’s usually a really pretty woman sat next to a funny bloke. I’d like to change things, I’m trying to turn the tables and prove that women can be funny too.’

Watch the first episode of Ready or Not this Easter Saturday (31st March 2018) on BBC1 at 6pm.

To catch up with latest news from our interviewees (before they perhaps catch you unawares) follow @tomallencomedy, @matthewcrosby and @thelondonhughes