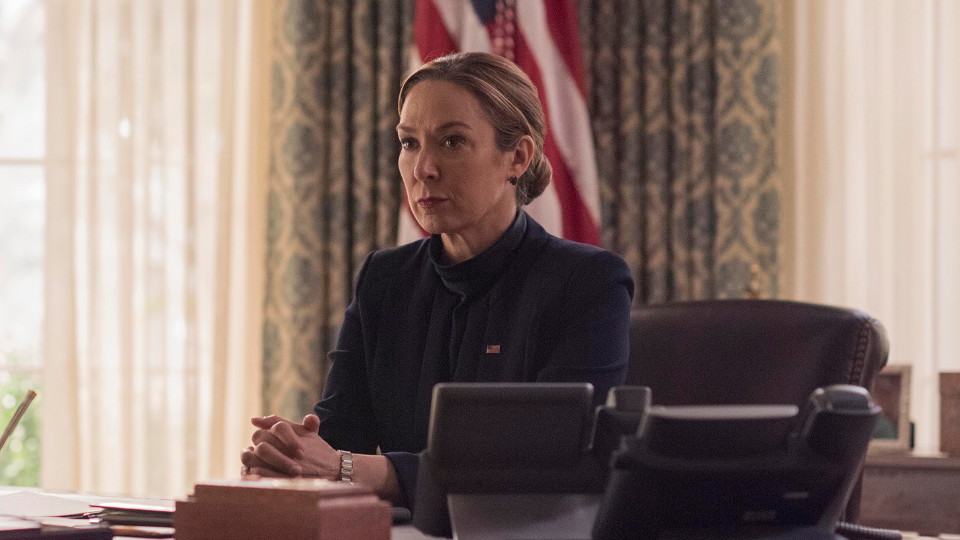 On the latest episode of Homeland, Carrie (Claire Danes) started putting the pieces together of what is actually going on.

The episode opened up with Carrie and Max (Maury Sterling) continuing to watch David Wellington (Linus Roache) and Simone Martin (Sandrine Holt). They couldn’t believe how normally she was acting and wondered if Wellington was innocent after all. As Martin left for the day she was served a subpoena to testify before Senator Payley’s (Dylan Baker) subcommittee. Wellington appealed to Payley before the hearing but he was having none of it.

At the hearing Martin surprised by asking for immunity. In exchange she agreed to name the person who tasked her with collecting and dropping off the $50,000 cash. Carrie had wanted to interfere with the hearing knowing that Wellington was innocent. However, Dante (Morgan Spector) stopped her and suggested she go home and medicate.

Meanwhile, Saul (Mandy Patinkin) continued to look into Yevgeny (Costa Ronin) following his meeting last episode with former SVR operative, Ivan Krupin (Mark Ivanir). He recruited an ex-CIA friend called Sandy (Catherine Curtin) who was an expert on Russia. Saul also brought in a techie called Clint (Peter Vack). He had the pair work on investigating if the Russians were carrying out some kind of information warfare.

Not knowing what to do next, Carrie reached out to Saul and they arranged a meet. Carrie explained what was going on and even disclosed the illegal surveillance. Saul knows his stuff and gently nudged Carrie into understanding what she was missing. It’s clear that Wellington was being framed but Carrie hadn’t realised she was a part of it. Saul managed to get her to see that her involvement came from Dante, so he must be part of the operation against Wellington and the Presidency.

Later, Wellington confronted Martin to find out why she needed to ask for immunity. They were in a bar and she pretended that he was threatening her and that he had grabbed her. She shouted loudly so people in the bar would hear and someone was filming the fake encounter. This was of course staged and all part of the framing plan. The video went viral on the Internet and Clint was able to determine that a network of social media bots were spreading it. He also determined that those same bots spread the fake J.J. Elkins story.

Elsewhere in the episode, Krupin went to a Russian contact and demanded a meeting with Yevgeny. At the meeting he demanded that Yevgeny stop his information warfare operation as it had led to the deaths of American citizens on their own soil. Krupin said it was against their protocols but Yevgeny said they were outdated. Krupin reached out to Saul but was put in a weighted body bag by Yevgeny’s men and thrown into a lake to drown. Saul was too late to save Krupin.

Wondering what to do about Dante, Carrie reached out to Anson (James D’Arcy) and the rest of her team that went after Martin. They arranged celebratory drinks and invited Dante along. There they got him very drunk and spiked his drinks with something. Carrie went back to his apartment and seduced him while he fell unconscious. While he slept Carrie let the rest of the team in to search the apartment.

Check out the Homeland 7×07 trailer below:

Here’s the synopsis for Homeland 7×07 Andante:

Carrie makes a move. Wellington has a reckoning. Saul expands an operation.