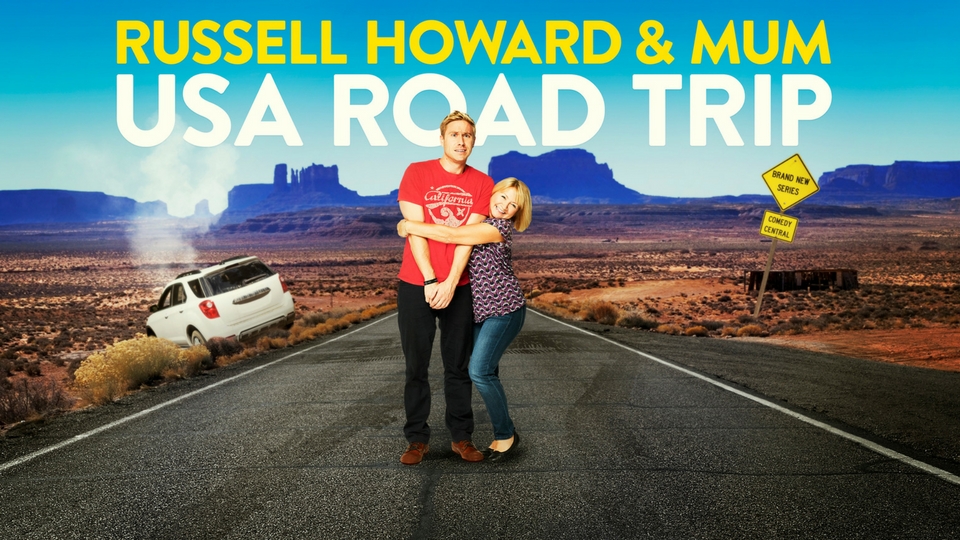 Could a Life Swap show with Jack Whitehall’s dad be on the cards?

In what might have been “Freddie Starr Ate My Hamster” 2.0, Russell’s dabbling at a Portland Pot Party with the legalised drug took an hilarious turn when the comedian sized up his host’s pet pooch against a George Foreman grill. Thankfully, Mum Ninette was on hand to provide enough distraction to overt the crisis. It must be the opening episode of the second series of Russell Howard & Mum: USA Road Trip.

The second series was filmed stateside in Trump heartlands at the same time as the first series during the 2016 election campaign. Trump references were left out of the filming in a mutual decision with Comedy Central, who feared it would date the show as he had no chance of winning. ‘We got it wrong!’ said Russell.

When I recently caught up with the pair they were hot off the tarmac from India, their next commissioned series location.

“We’ve just filmed the third series in India! The episodes will be longer, increasing from 30 minutes to 60 minutes, which is really nice as we can stretch things out more, have more fun in the moment and keep more of our road-trip car conversations in” said Russell.

The close-knit pair relished the opportunity to spend more time together making the show, aided by the fact they believe they can be completely open with each other. Russell acknowledges this is unusual, but makes for great TV:  “What you see on screen is how we are and it’s normal to us. I find it strange when my friend James who’s 40 can’t swear in front of his mum. I always find it peculiar when you can’t be who you are with the person who brought you into the world.”

The ease of their on-screen relationship provides fertile ground for the silliness to quickly escalate. Russell’s mum and co-star Ninette, agrees: “Whatever mood we’re in, be it happy, miserable, we can be ourselves with each other and that’s key.”

“It’s really excellent to spend time with someone who has a filter like my mum, as I can be in whatever mood I want. Though she’s become a real diva since we’ve been filming together” Russell joked.

The premise for working together has endearing roots. Russell isn’t just wheeling out his mum for laughs. They’re on a mission to make memories, and Russell believes he’s finally cemented the title of ‘favourite son’ with the mum-of-three.

“We’d actually had a bleak conversation where mum had said when you get old the only thing you want to do is be in an old people’s home where they don’t hit you – so I thought the least I can do is help her create memories to enjoy. So hopefully by now she’s stocked up on memories for between the beatings” [they laugh].

Russell believes Ninette, whose family are full of ‘daft, beautiful and brilliant characters that you can’t help but observe’, is a complete natural in front of the camera. “Putting a camera into situations definitely loosens things up and you start egging each other on like two teenagers. It was a lot of fun. But i’m a comedian and I’ve got a dark heart so have no feelings left – there’s nothing mum can say that shocks me and vice versa.”

One of Russell’s biggest comedy inspirations is his grandad, who he describes as a cross between ‘a Roald Dahl character and Wallace from Wallace and Gromit’. “He once fixed a lawn mower with a broom handle but hit a bump in the grass and managed to knock himself out. When I was eight he also told me he could walk from Bristol to Edinburgh on his hands, but wouldn’t do it as he didn’t want to give people the satisfaction.”

But will Ninette be pursuing a one-woman show career in live comedy? When we asked if she might take part in Funny Women, the comedy competitions to discover new female talent, Ninette was a little hesitant. “Russell has to remember a script and i’m only good at making it up as I go along. I don’t know how he remembers everything he says on stage. But he always adds something extra, that’s what I love about his shows.”

“I think she could do ‘Whose Line Is It Anyway’?” said Russell.

Ninette has seen her Twitter following rocket from 190 to more than 500 since her new found fame. In the real world, she often gets recognised at the local garden centre and most recently at a French and Saunders gig. However, she’s yet to receive an invite to Russell’s celebrity parties but insists she’s ‘waiting by the phone’.

Russell’s bond with his mum meant it took him five years to pluck up the courage to invite her to see him perform, in the earlier stages of his career. “I wanted it to be perfect before she saw it” said Russell. “People that know you know all your flaws and you can’t convince them you’re funny. But now Mum comes to all my shows and still laughs like it’s the first time she’s seen it.”

Highlights in the series included an OAP beauty pageant that Russell got to take part in, wore heels and was fitted for a dress. The pair also try cannabis in its many legal forms in Portland, Ohio, including in a banoffee pie. “I’m not a smoker which I think you need to be to enjoy smoking it” said Ninette. “‘I did like the cannabis oil,  it really worked on my bunions actually, but I couldn’t bring it with me as you had to leave it in Portland’

“It couldn’t have been further than something hedonistic and cool when you see your mum rubbing cannabis oil on her bunions and saying ‘it’s alright actually’ quipped Russell. “But Portland was a weird place” he continues. “There’s even a vegan strip club.”

‘You sort of get to know who your friends are when you’re putting on a charity gig’ he recalls.

Another comedy pal, Jack Whitehall, who recently tweeted to help Russell find his missing dog (which he later found in his bathroom) sparked an idea for another TV show. ‘I’d love to do a Life Swap with Jack’s dad and my mum.’

On the stage, we can expect to see a more of comedian-with-a-conscience Howard, who plans to discuss causes and debates in new material that are rooted in issues that make him ‘socially angry’.

“These days young people have to save for decades in order to have the money to own a house and I look back and realise I couldn’t’ have had a career in comedy without my mum and dad who allowed me to stay at home until I was 24 and I was on £60 a week.”

“There are so many things that we all read and get angry about. I was chatting to my friends Roisin Conaty, Sara Pascoe and John Robins about a stat I heard that one in four 16-25-year-old girls self harm in the UK. After talking about it I decided to discuss it on stage, which was a really interesting experience and it went well. If it’s an issue I care about that really grabs me, I’ll say it. Doing overtly political material about the news is boring. The issues that grab me include NHS healthcare professionals having parking fees deducted from their paychecks to how Grenfell is being handled and the neglect shown to the people affected. Hopefully people will trust me to deal with what makes people angry in a genuine way that isn’t flippant.”