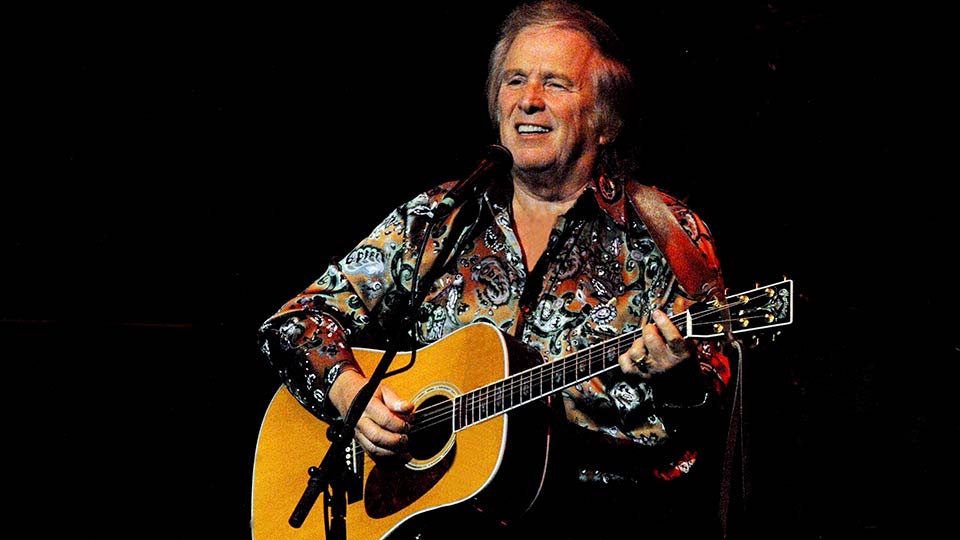 Don McLean, the talent behind the songs American Pie, Vincent, and many other hits throughout the decades, returns with his latest album – Botanical Gardens.

One of the most popular and acclaimed country/folk stars in the world, McLean’s music from the 70s onwards captivates new audiences of younger people every year, and his continuing legacy provides new songs for fans of all ages. It’s a lovely touch that his iconic Stars and Stripes thumb print from the American Pie album is rendered on the CD artwork for Botanical Gardens.

It’s immediately clear from the opening title track that McLean’s talent still burns brightly. Unlike many other male singers, the timbre of his voice is virtually unchanged by the passage of time. This has the effect of rendering Botanical Gardens – both song and album – intriguingly new and yet satisfyingly nostalgic. Botanical Gardens is indicative of where McLean’s songwriting genius lies – conjuring a strong sense of time and place that the listener can experience for themselves. You can almost smell the dampness and the moss. The references to “beautiful girls” may ruffle feathers in the #metoo age, but McLean’s song recalls earlier times when he walked in the gardens near Sydney Opera House, and the traditional lyricism pays off the qualities of dreaminess and nostalgia, setting the tone for the album.

Botanical Gardens is an enjoyable mixed breed: it crosses several genres from folk to country and early rock. Amongst McLean’s other hallmarks, you’ll also find a fair amount of whimsy and sentiment. The Lucky Guy, which evokes Irish folk, doesn’t create original ideas, but it’s a feel-good song. Waving Man also takes familiar territory, where McLean imagines and summarises the whole life of an old man who sits and waves at passers by, day in, day out, recalling previous variations such as Oh My What a Shame, though this time with an upbeat tempo. The chorus is one that sticks persistently in the head.

Total Eclipse of the Sun strikes a more urgent tone and concerns a liaison with a femme fatale, adding a touch of drama to the music, which reoccurs in When July Comes, though the musical influence for that one is Gershwin’s Summertime from Porgy and Bess. It captures the same kind of hazy, lazy, steamy mid-summer, and the seasonal metaphors are amongst the most intense.

McLean heads into known waters for You’re All I Ever Had – a slow dance number which would sit neatly next to any song in his earlier canon. The next song, Rock ‘n’ Roll Your Baby, is an homage to early rock and works as a slice of 50s/early 60s music that’s sure to get any foot a’tapping.

After a whimsical double-bill (I’ve Cried All the Tears That I Have/Ain’t She a Honey), we get onto another album highlight: The King of Fools. Combining lyrics of sheer poetry with a Frank Sinatra-esque sound, perfectly evoking what it means to lose love and respect, it’s a rich song, full of depth and heart. Grief and Hope is from the country music stable, and we round out with Last Night When We Were Young, which transports the listener to a sophisticated cocktail bar, whilst a singer in bowtie and tuxedo tickles the ivories. You can almost smell the liquor.

You may be tempted to think, after around half a century in the business and with nineteen studio albums under his belt, that there are no songs left to tell; but Botanical Gardens is a timely reminder that Don McLean’s voice, both as a songwriter and performer, in undiminished. Botanical Gardens is a beautiful collection of songs from an evergreen talent. The trick is that they sound almost effortless. But they’re simply the product of a master craftsman who has more than his fair share of flashes of pure genius. You’ll find some memorable songs to treasure here.

Even better news for UK fans is that Don McLean is touring the country in April and May. See all the tour dates and venues.

Track list: 1 Botanical Gardens 2 The Lucky Guy 3 A Total Eclipse of the Sun 4 Waving Man 5 When July Comes 6 You’re All I Ever Had 7 Rock ‘n’ Roll Your Baby 8 I’ve Cried All the Tears That I Have 9 Ain’t She a Honey 10 The King of Fools 11 Grief and Hope 12 You’ve Got Such Beautiful Eyes 13 Last Night When We Were Young Record label: BMG Release date: March 23rd 2018