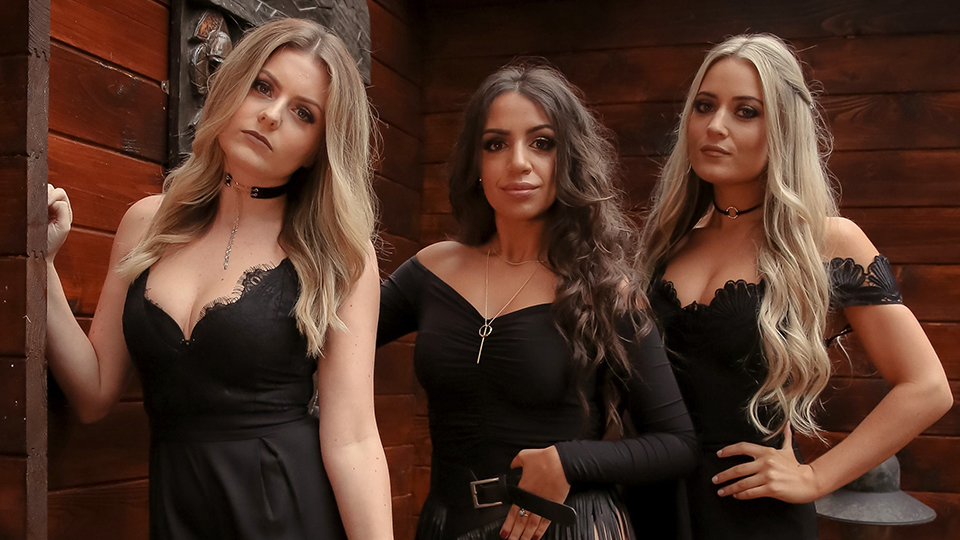 Country-pop trio The Adelaides may be relative newcomers, but they’re definitely going places.

Paris, Abi and Alicia have already won over fans with their sweet vocals, tight harmonies and mix of original songs and covers. They’re also getting plenty of live experience under their belts, supporting artists including Andy Brown, Catherine McGrath and Megan McKenna on their recent tours.

I sat down for a chat with the girls during C2C Festival at the O2 (where they played on all three days) to talk festival crowds, what they’ve learnt from touring and their plans for 2018, plus much more.

Hi guys! How are you finding your first C2C?

Alicia: We’re having the best time.

Have there been any particular highlights?

Alicia: I think yesterday – it was our biggest crowd and it was a bit overwhelming. We played on the Big Entrance Stage at about four in the afternoon, and the whole place was packed.

Paris: The crowd just started to get so big.

What do you think it is that makes this festival particularly special?

Alicia: It’s about everyone that loves country music, and even people that don’t love country music come along anyway. And then it’s growing so much every year.

Alicia: It’s nice that everyone’s here for the same reason.

Abi: I love the cowboy hats as well. I’ll have to buy myself one!

Alicia: I’d say like a crossover between country and pop, definitely. We do the modern side to country music, like Maren Morris-type, Carrie Underwood, Dan and Shay.

How did you come up with your band name?

Paris: Oh, here we go! We literally just got asked this one…

Alicia: So basically there is a film called Calamity Jane, and it’s one of mine and Paris’ favourite films – Abi’s never watched it.

Abi: I love Australia, I love hot weather, there’s an island off Australia called the Adelaides – I was like, sold!

Alicia: But we took our inspiration from the film. There’s a character called Adelaide Adams, she’s a showgirl, so we just love her and we thought, ‘why not, eh?’

Abi: All that female empowerment and stuff.

You’ve been out on tour recently with the likes of Catherine McGrath and Andy Brown – how was that?

Paris: Busy! We literally flew from Ireland, from the Catherine tour straight to C2C, so we’re knackered.

Abi: We all need to pack a bit lighter.

What’s the one thing you’ve learnt from being on tour?

Paris: Just how busy and tiring it is, I suppose.

Alicia: Yeah. I guess learning to be on it all the time. You’ve got a lot of time schedules that you have to follow.

Paris: And trying to get an early night, because you need it!

Abi: Fitting everything in. It’s a completely different lifestyle to anything else – it’s one of those where you’ll go to bed really late and have to get up really, really early. So it’s just like ‘argh!’

Paris: But then you kind of get accustomed to it.

Alicia: You need to have some good concealer on you to cover up the dark circles! [laughs]

Abi: Take a mini makeup bag everywhere with you. And tired eye drops!

Paris: It always changes. I mean, sometimes we start with song titles, sometimes come up with concepts that we want to write about or one of us will come in with an idea. It’s different every time.

Alicia: We’re normally at one of our houses but we actually just wrote a song in the studio whilst we were recording, so it can happen anywhere really. We have notepads that we carry round with us all the time just to jot things down.

Paris: If something comes in our head we’re like ‘quick, record it!’ [laughs]

Abi: Sometimes in the middle of the night when you’re trying to get to sleep and you’re like, ‘[sings melody], I need to record this’. And then you wake up in the morning and you listen to it and you’re like ‘well that’s bloody s***, what was I thinking? I got out of bed for this?!’

Alicia: That’s one of your favourites.

All: Diane by Cam! [Alicia laughs]

Paris: We absolutely love that song. And the harmonies are perfect.

Alicia: What do you think about the other question?

Paris: Who would we like to cover one of our songs? Dan and Shay, doing Jelly Baby [laughs]

If you had a bucket list for the band, what would be on that?

Alicia: We would love to tour with Dolly Parton. Or Rascal Flatts as well.

Abi: Or Luke Combs, we love Luke Combs. He’s got a tour coming up, if you’re listening… [all laugh]

Paris: We’ve been on tour with Catherine so we’re gonna finish the leg of that tour, and then we’ve got festivals all summer. And writing sessions, back in the studio, and then just see what happens.

Alicia: Yeah, it’s always last minute. We get an email and it’s like, ‘ooh, we’re off again girls!’

To find out more about The Adelaides head over to https://www.theadelaides.com/.