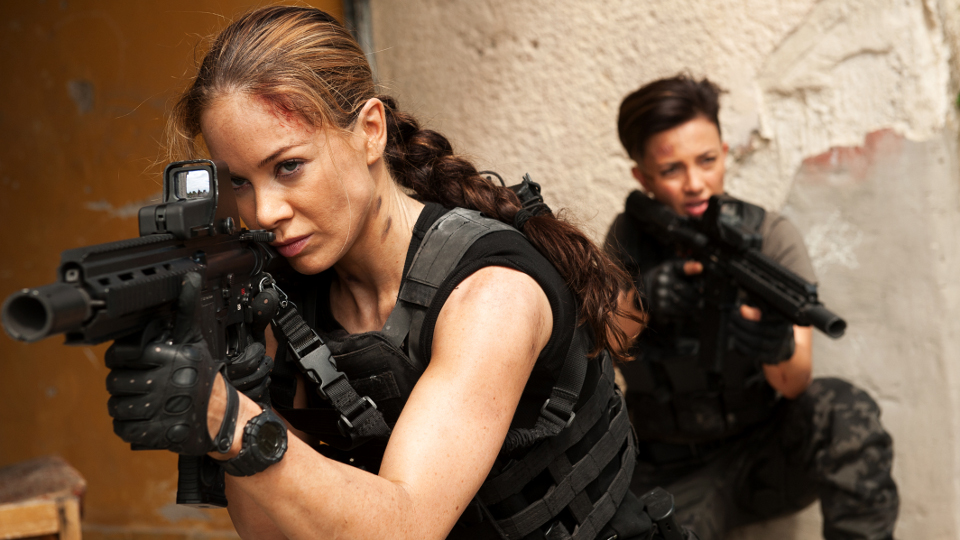 In the latest episode of Strike Back, Section 20 continued their search for Jane Lowry (Katherine Kelly).

Episode six opened up with Mac (Warren Brown) and Reynolds (Roxanne McKee) pursuing some drug runners. After catching them they pushed for information on Jane Lowry (Katherine Kelly)
and Milos Borisovich (Peter Firth) but they could tell them nothing.

In Belarus, a Muslim girl was attacked by a racist gang but was saved when Lowry appeared and fought them off. It was soon clear that Lowry and the girl knew each other when the girl asked if it was time. Lowry helped her up and replied that it was time.

Meanwhile, Novin (Alin Sumarwata) woke up feeling rough from the night before. A flashback revealed that she had shared an unexpected night of passion with comms guy Jensen (Phil Dunster). She got out of bed and found Jensen up with breakfast ready. She told him it was a one off and not to get weird about it. Jensen showed her he had found some info on Lowry and she said he should call it in. They then slept together again.

Back at work, Wyatt (Daniel MacPherson) commented that Jensen was looking rather smiley. Donovan (Nina Sosanya) asked Jensen to talk her through what he had found. He had uncovered information about the attack on the girl. The girl was called Maya and had links to radicalism with a guy in Turkey who had links to Omair Idrisi (Don Hany) and Lowry.

Lowry spoke to Maya and said that Idrisi would have been so proud of her. Lowry took a call from Borisovich who gave her the go ahead to test their nerve agent. He wished her luck and Lowry told Maya that it was happening that day.

Reynolds and Novin went to talk to Maya’s sister to see if they could find out any information. She gave them a lead on a car that she say Maya and Lowry get into. Jensen tracked the car and found CCTV of Lowry and Maya. Donovan was sure that Lowry would use Maya for an attack. A sighting of the car came in and they determined that they were headed to Minsk airport.

The team headed straight out to try and prevent the attack. Outside the airport, Lowry passed Maya a package that contained the nerve agent disguised as some toiletries and wished her luck. Donovan contacted the airport but they refused to evacuate the airport without proper evidence.

Inside the airport, Maya looked worried as she made her way to check-in. The team arrived and frantically began a search for her. Maya was stopped at security and she set off the metal scanner but it was just her belt buckle. The deadly package made it through unnoticed and Maya proceeded to the bathroom with it. There she combined the canisters before heading back into the departures lounge.

Section 20 arrived but were stopped by security. While Wyatt argued, Reynolds spotted Maya and ran through brandishing her sidearm. She told a worried looking Maya that she didn’t have to carry out the attack and tried to get the bag off her. Maya activated the device and Reynolds shot her dead. Fortunately the device was a dummy and no-one was infected. Borisovich had his assassin Yuri (Urs Rechn) at the airport to see if Section 20 arrived and he reported in that they had.

An annoyed Lowry laid into Markov at the device not working. Borisovich revealed that he requested a dummy to test they could get it through security. He celebrated the test as a complete success and said that Yuri would take care of Section 20.

Donovon spotted Yuri on the airport security footage. Jensen identified a cousin of Yuri who owned a pool hall nearby. Reynolds asked if Maya’s sister had been informed of her death and Donovon told her not to feel bad about it.

That evening Wyatt and Reynolds drank together at a hotel bar. He told her she had down the right thing. She was concerned how obsessed Donovon was with taking Lowry down. Wyatt asked her the plan and she replied she’d finish her bottle of whiskey then find someone vaguely attractive to sleep with. Wyatt suggested himself but she had eyes on the barman and took him to her room instead.

In Minsk, Wyatt, Mac and Novin paid a visit to the pool hall. They teased Novin to try and find out what was up with Jensen. Yuri’s cousin soon appeared with his men and told them they couldn’t stay. They asked for info on Yuri and offered cash but a fight broke out instead. The team easily took them all out then roughed up the cousin. He told them that Yuri had been sent out hunting by Borisovich.

Reynolds awoke in her hotel room and kicked the barman out. Yuri entered holding a handgun as Section 20 tried to warn her. Yuri told her it was ok to be scared and a fight broke out. While being thrown around the room, she managed to get to her bag that contained her gun. She managed to put a couple of bullets in Yuri but he jumped out the window and escaped.

Jensen tracked Lowry’s location by using a radiation signature from the failed device. It showed that the material had come from Chernobyl. There Markov had completed his nerve agent canisters. Lowry called Borisovich and told him that would be a few more days. Borisovich met up with Russian FSB to have them raid the compound. They took the nerve agent but left one for Borisovich.

After they left, Section 20 arrived on scene to raid the compound. Donovon told Reynolds to try and keep a sample of the nerve agent for the ministry to analyse. Mac and Wyatt came up against Yuri and killed him by hanging. Outside, Reynolds and Novin tried to stop the FSB taking Markov before joining up with the boys. They found Markov who told them the FSB was taking the nerve agent.

A gun fight broke out but the Section 20 team came out on top. In the chaos one of the canisters was punctured and a lockdown began. Reynolds was too close and the nerve agent began to take effect. The team extracted her to Markov who had an antidote but it was missing. He set to work on a new one but took a bullet to the head and was killed. Mac took a risk and used the unfinished antidote and it seemed to work. Before leaving, the team rigged the compound with C4 and once outside Novin detonated it.

Lowry argued with Borisovich but he still had the nerve agent and planned to use it to make more. Lowry managed to take it from him and dropped it on the floor. Lowry, Borisovich and his men were all exposed but she had the stolen antidote and injected herself. She managed to get outside to safety and took a phone call from an unknown number.

At the end of the episode, Reynolds received treatment in hospital. Jensen intercepted the call to Lowry and passed it to Donovan. It was revealed that Omair Idrisi is still alive!

Read our preview of Strike Back: Retribution episode 7.

Strike Back: Retribution continues Wednesdays at 9pm on Sky 1 and will air in the US on Cinemax in 2018.