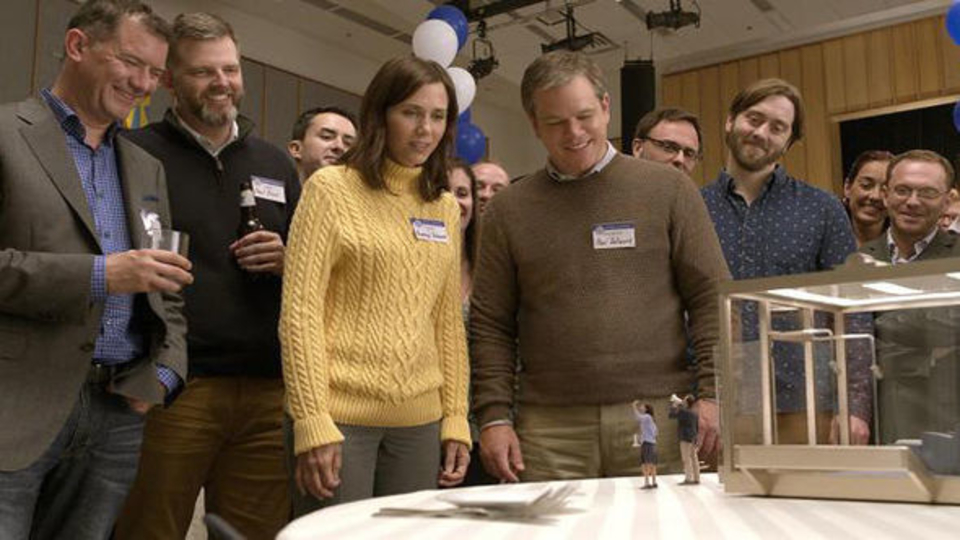 Known for his comedy dramas (About Schmidt, Sideways, The Descendants), Alexander Payne returns with yet another offering, with mixed results.

This time around, it’s a social satire which sees people ‘downsize’ literally – meaning they shrink to around five inches tall in an irreversible procedure which provides both an environmental benefit to the world, but chiefly delivers economic benefits to the downsizers (as their money goes that much further in their smaller environment).

As it happens the set up is excellent as we see an ordinary couple, played perfectly by everyman Matt Damon (The Martian) and Kristen Wiig (Ghostbusters), who are seduced by the downsizing option after meeting former full grown friends Jason Sudeikis (Colossal) and Maribeth Monroe (Jumanji: Welcome to the Jungle).

Their friends are relishing their new lives so much that the Safraneks take the plunge too, but it is at this stage that things start to go downhill – not only for Matt Damon’s character, but also for the film as a whole as the plot becomes overly complicated and convoluted involving, among other things, the end of the world.

Matt Damon and Kristen Wiig are both solid in their roles, although Damon’s character is a touch bland and one dimensional, but the real stand outs in this film are Hong Chau as a dissident refugee, and Christoph Waltz and Udo Kier clearly revelling in the roles of quirky next door neighbours.

Downsizing is an interesting social commentary with a great set up, but it soon becomes a touch confusing and overblown, which is a shame.