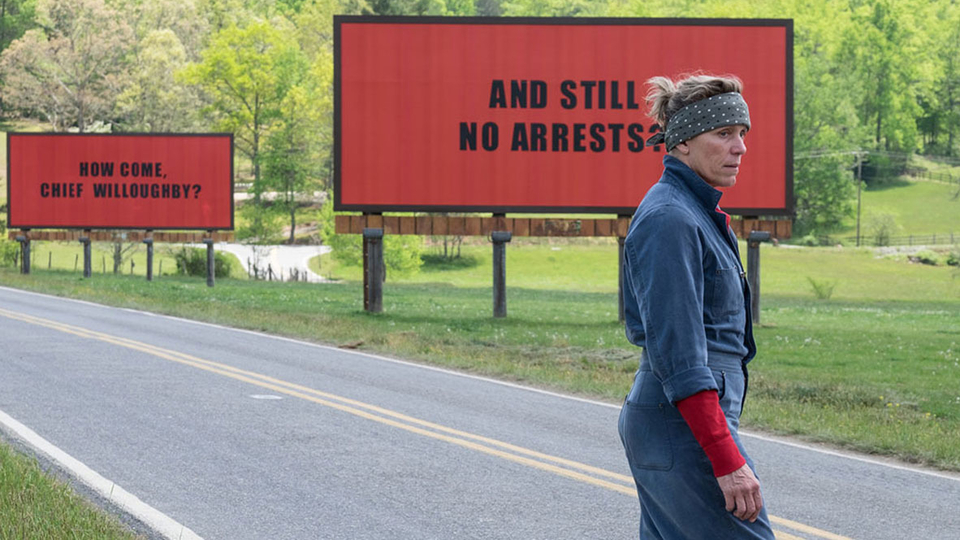 Martin McDonagh, the man responsible for In Bruges, delivers a stunning drama fully of human interest, violence and even comedy. Frances McDormand is mesmerising as Mildred, a mother who is fed up that the local authorities are not doing enough to find the men responsible for her daughter’s rape and murder. Paying to advertise on 3 big billboards that greet visitors to town, Mildred angers the locals as she tirelessly pursues justice.

It’s safe to say that no-one would begrudge Frances McDormand from walking away with all of the Best Actress awards this year – she is that good in Three Billboards. In a remarkably layered and entertaining performance that’s punctuated with genuine despair and emotion, McDormand is a revelation here and deserves all of the praise for delivering such an unforgettable role.

Sam Rockwell’s performance is so powerful that it makes you feel a myriad of emotions towards him. On the surface, he plays an easy to hate racist cop who has a chip on his shoulder. For most films, that would be enough, but Martin McDonagh has decided to give even the most hated major character of the ensemble some real depth. It’s a role that Rockwell clearly relishes playing and one that highlights what an accomplished performer he really is, perfectly marrying up drama, comedy and tragedy.

There is also superb support from the likes of Woody Harrelson, Caleb Landry Jones, Peter Dinklage, Samara Weaving and Abbie Cornish, who all contribute hugely to the films success. With an unmistakable indie sensibility, all of the actors here seem to enjoy a freedom of expression that really brings out their best work. Harrelson in particular has a tough role but effortlessly handles the responsibility by fleshing out McDonagh’s remarkably-sharp script with real emotion and verve.

Three Billboards Outside Ebbing, Missouri looks to be an awards-season dead-cert and it deserves to be. With a biting script that looks deeply into the souls of its characters, Three Billboards delivers one of the most involving and intense movies you’ll see all year. Exquisitely paced and with a searing streak of black comedy throughout, this is a wonderfully unconventional film that will linger long in the mind.