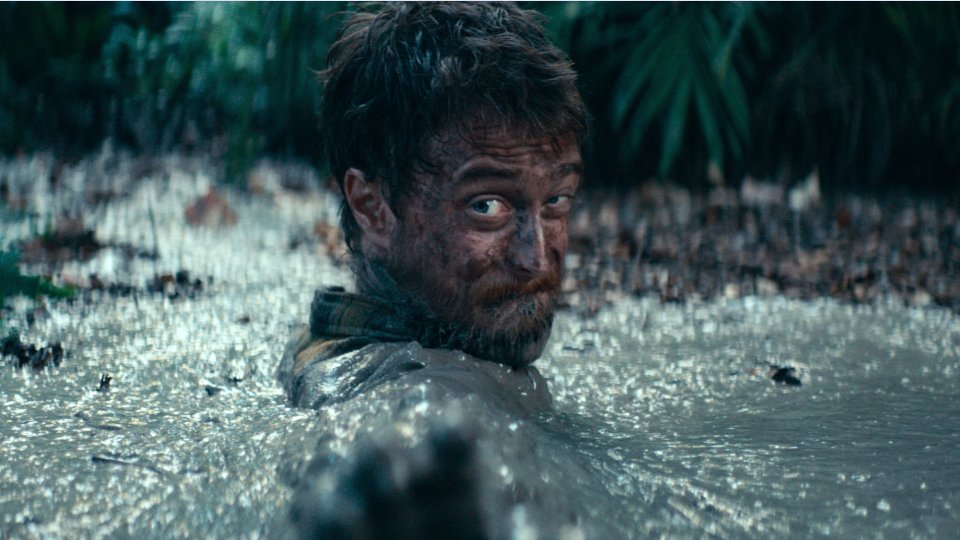 Young Israeli Yossi Ghinsberg (Daniel Radcliffe) ventures into the Amazon rainforest with fellow adventurers Kevin Gale (Alex Russell) and Marcus Stamm (Joel Jackson), whom he meets on his travels. The trio encounter Karl Ruchprecter (Thomas Kretschmann), who offers to take them on a jungle expedition. As they get further into their exploration, the group becomes separated and Yossi is left fighting for his life against the natural dangers of his surroundings.

Jungle is based on Yossi Ghinsberg’s book Jungle: A Harrowing True Story of Survival, which recounted his survival story after becoming lost in the jungle in the 80s. This film adaptation directed by Greg McLean (Wolf Creek), sticks closely to the source material and delivers a real slow burn of a movie. At nearly two hours in length, Jungle suffers from pacing problems and the first hour moves at a glacial pace, which is sure to test some viewers.

The premise itself is intriguing but you spend too much time waiting for Yossi and his friends to find themselves in the predicament that you know is coming. Once Yossi is separated from the rest of the group, Jungle kicks things up a notch as it mixes Yossi’s hallucinations with his attempts to survive among a terrain he knows little about. There are plenty of grisly moments and those of you who are squeamish may struggle to make it right the way to the credits.

For all of the film’s flaws, there is something redeeming about it and that’s the performance of Radcliffe. Often dismissed as someone with limited acting ability thanks to his Harry Potter past, Radcliffe is rarely given fair treatment by his critics. Since finding global stardom in the Potter films, Radcliffe has taken an unusual career path opting to tackle projects that are outside of the mainstream. Interestingly Jungle sees him give his strongest performance yet. Not only does Radcliffe master a convincing Israeli accent, he also shows some depth and range to his acting that we haven’t seen before. It’s clear that he thoroughly committed to this role and as Yossi he shines in a way he never has before.

Kretschmann is under-used in a very under-written role but Jackson and Russell manage to impress in their small supporting roles.

The Blu-ray disc special features include a featurette exploring Radcliffe’s transformation into Yossi and a wealth of interviews with the cast and crew of the movie.

Jungle isn’t the movie that it thinks it is but it’s certainly watchable in large part thanks to Radcliffe’s performance. The film takes him out of his comfort zone but the lack of focus in the script really lets it down. A shorter run-time and a sharper focus would have resulted in a significantly better movie. If you’re a Radcliffe fan then I would recommend you watch Jungle but if you’re not, you’re unlikely to find much to love about the movie.