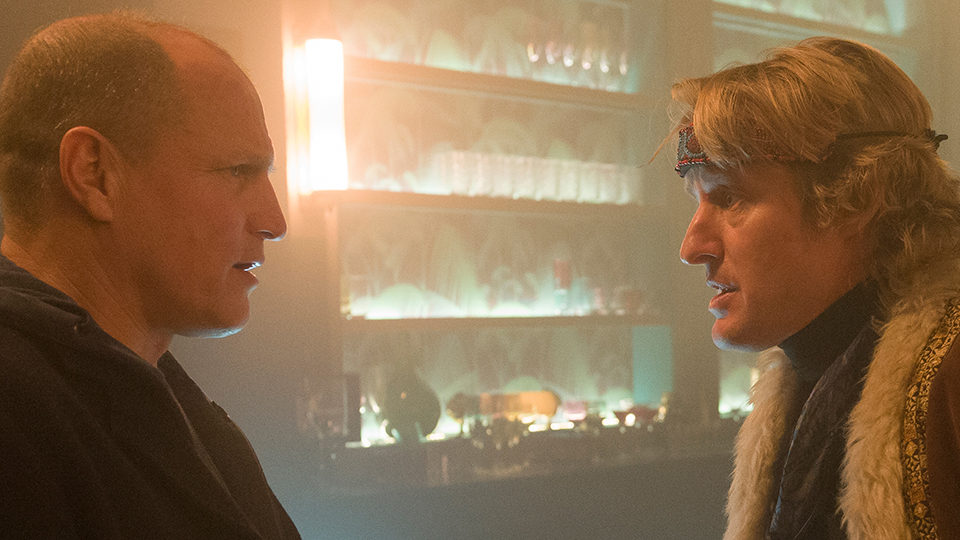 Lost in London is Woody Harrelson’s audacious live movie project. The concept of an entire film shot live conjures several possible outcomes in the imagination – though none leads to the expectation of a cinematic masterpiece. Yet Lost in London rises to the technical challenge it sets itself and delivers as a heartwarming, funny, well-performed movie experience that hooks the viewer with the intrigue of the premise, yet holds them spellbound with the power of the storytelling.

Loosely based on true events, Lost in London tells the story of one night in Woody Harrelson’s life, fifteen years earlier, when he’s playing a straight, tedious drama on the West End to bored audiences, on a day when a sex scandal he’s involved in has made newspaper headlines. Keen to keep the sordid revelation from his wife Laura (Eleanor Matsuura), he intercepts her at dinner and attempts to take her back to the hotel before she can find out. Cue an embarrassing scene at the restaurant, after which Woody realises his marriage is on the rocks. Unwelcome with his family at the hotel, he instead accepts the offer of a drink with party-goers, but little does he know his troubles are only just starting…

Lost in London descends into an evening Woody would not describe as his finest as he throws up in a young lady’s mouth, has a fight with Owen Wilson (his best friend), tries to steal money from a man in a wheelchair and ends up running from the police. Just when you think things can’t get any worse for Harrelson – fate intervenes to throw him another twisted chunk of mean old karma.

There is so much this movie has going for it, but it’s built on solid foundations, since the script is well-written and packed with humour. Only the very first scene, in which Harrelson comes off stage and chats to Alex (Ade Oyefeso), feels slightly forced, perhaps because it’s not clear who Alex is meant to be or where the story is going – but it’s the only segment that feels scripted and performed. Once we reach the restaurant, the story grabs you, and the first hints of the surreal comedy that are to follow emerge as Harrelson’s children tie together diners’ shoelaces under the table, unleashing chaos.

Woody Harrelson is very well-supported in the movie by Owen Wilson, and the highest points are when they are on screen together. The banter is brilliantly funny, and a masterclass in self-deprecation by both stars, especially as it follows a glorious moment in which Harrelson protests his celebrity status to unconvinced bouncers. For special moments, it eclipses even an appearance from the Dalai Lama of Texas himself – Willie Nelson.

Supporting performances don’t let the side down, either. Eleanor Matsuura is a great foil as the dignified Laura, who is a voice of reason and sanity amid the unfolding anarchy. Martin McCann keeps you guessing as to whether he’s good cop or bad cop, and British sitcom stalwart Robert Gillespie appears as a chilled-out, mystical taxicab driver – just at a moment when Harrelson desperately needs him to put his foot down. The juxtaposition is hilarious!

Ultimately the movie belongs to Woody Harrelson, who has to be congratulated for an astounding achievement, not only in creating the film, but in performing the full gamut of emotions over the space of an hour and a half. Sure, you could argue that he does that on stage, and that television drama used to be shot live – so is it really groundbreaking? But with Lost in London, Harrelson combines a stage-worthy commanding central performance with the achievement of a technically complex, special effects and make-up dependent production filmed essentially in one take. To say he exceeds expectations is an understatement – what Harrelson pulls off (in writing, directing and starring) is damned near miraculous, and he’s winningly warm, cheeky and charming in the process.

At times, Lost in London made this reviewer howl with laughter, and also cry. There’s a scene towards the end which managed both. It’s easy to become emotionally invested in this poignant, personal, often bizarre and always compelling film. In revealing his vulnerabilities and failings as a human, Harrelson connects with the audience in a way we’ve perhaps not seen in such detail before. What I took away from Lost in London was not how technically brilliant it is, but how surprisingly affecting the emotional punch is.

The shot-as-live quality is not a gimmick, but a way to achieve a sense of reality with which to suck the audience into the drama of a mad and otherwise implausible night that so quickly descends into a maelstrom, where only good humour and a Reggae-obsessed Bono on loudspeaker can guide Woody out.