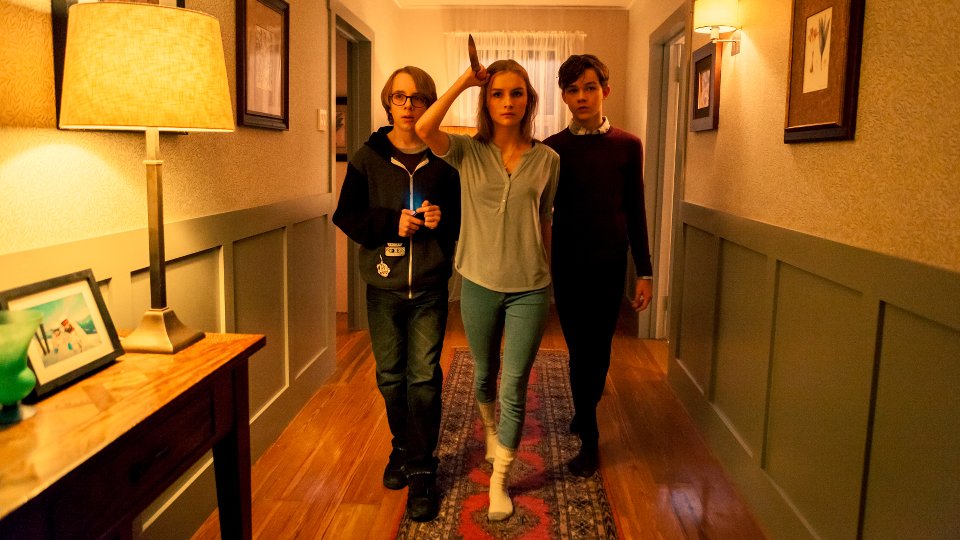 Luke’s (Levi Miller) parents hire babysitter Ashley (Olivia DeJonge) to look after them while they go out to a Christmas party. Knowing that Ashley is leaving town soon, Luke decides he’s going to make a move on her believing that they could be a couple, even though he’s five years younger than she is. Once he’s alone with Ashley, Luke tries to impress her but his plans are ruined when his unpredictable best friend Garrett (Ed Oxenbould) crashes the evening. Shortly after Garrett’s arrival, a brick is thrown through an upstairs window and the trio realise that they aren’t alone. Garrett attempts to make a run for it, leaving Ashley and Luke to fend for themselves against a masked intruder.

Better Watch Out starts off as a fairly typical home invasion movie albeit with a Christmas backdrop. Bringing to mind Home Alone (there are a lot of references to that classic throughout the movie), Better Watch Out soon transforms into something altogether more different but to say any more would be to really ruin the unexpected direction that the film takes. It’s fair to say that the film has two distinct halves and its young cast are the glue that holds it all together.

The film manages to mix dark comedy with plenty of suspense and I was surprised to find myself on the edge of my seat a fair amount. As the film begins to unravel and shows its hand around the midway point, Better Watch Out changes into a decidedly average watch to something altogether more impressive. This is the second film I’ve seen at FrightFest this year that has taken a well-trodden trope and done something completely different with it.

Olivia DeJonge and Ed Oxenbould reunite following their stellar turns in M Night Shyamalan’s surprisingly good return to form The Visit. This time they aren’t playing siblings so it’s interesting to see that they still have great chemistry despite a completely different dynamic bringing them together. While both actors are undeniably good, it’s Levi Miller that really wows. Prior to this movie he’s best known for the critically mauled Pan but after people see this, he’s likely to be marked out as one of the most promising young actors of his generation. His performance is nothing short of a tour-de-force and despite his young age he gives an incredibly layered and multi-faceted performance that belies his young age (he’s only 14).

Patrick Warburton and Virginia Madsen have small roles as Luke’s over-bearing parents and despite only being on screen for a relatively small period of time, they still make their mark with an entertaining passive aggressive argument in the opening moments.

Better Watch Out suffers only from repetition in the second half. The set-up limits the characters in terms of their setting and to get to the fantastic climax, there is a little bit of déjà vu in what takes place. It’s a minor quibble though and the performances of the cast are universally excellent. Better Watch Out is really a movie set at Christmas rather than a Christmas movie but it does something wonderfully inventive and for that it deserves to be widely applauded. Whatever you think this film is going to be, I assure you it’ll be completely different to what you expect and that’s what makes it a real gem.