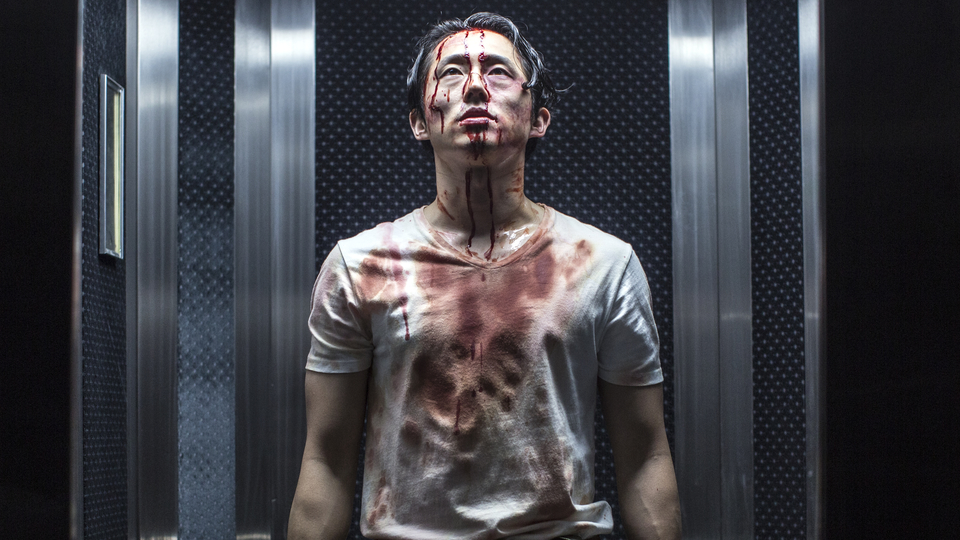 Delivering a dream scenario where you can literally get away with murdering your boss, Mayhem is an utter gem of a film from writer Matias Caruso and director Joe Lynch. It delivers on every level, easily making it an enjoyable, popcorn-munching horror that will resonate with anyone who has ever worked the corporate ladder.

A new health scare has materialised, dubbed the Red Eye virus, which causes a person’s anger and inhibitions and to go into overdrive. The virus has largely been contained but there are still isolated cases popping up across the city. Derek Cho (The Walking Dead’s Steven Yeun) is a young legal professional who did pivotal work in a landmark case that exonerated a man for killing his colleague in the workplace, in board daylight and with hundreds of eye witnesses. Citing that a person has no control when they are infected by the Red Eye virus, it has now become legally clear for someone who has been infected to literally get away with murder.

Derek has worked his way up the corporate ladder and is part of a system which he doesn’t like, but he has a flashy corner office and is paid a handsome salary so he’s ok with it. One day, Derek is made a scapegoat for a multi-million dollar blunder at his company and is subsequently fired. Just as he is being escorted from the building, his entire office block is placed under quarantine as reports state that the Red Eye virus is active in the building. With armoured police standing guard outside, all of the office inhabitants have to wait it out for around 8 horrors before things get back to normal.

But with his inhibitions now freed, Derek wants answers to why he was fired and teams up with a disgruntled customer named Melanie (Samara Weaving), who herself wants to seek revenge for the company’s blatant crimes against her. Together they make their way up the building towards the evil CEO and his board of 9 directors, who will stop at nothing to protect their own selfish interests.

The set-up is almost like a computer game mixed in with The Raid, and delivers brilliant set-pieces of office carnage and bloodshed that will get you cheering, and all with a wry smile and plenty of satire to boot. Yeun is a fantastic lead that you can easily champion and shares a wonderful chemistry with Weaving to create a duo with revenge on their minds and an obvious attraction for one another.

The supporting cast are all great too with Steven Brand quite excellent as the despicable boss John Towers, who orders his entire workforce to kill Derek for a sizable pay rise. Caroline Chikezie is great as Derek’s despised superior and Dallas Roberts delights as ‘The Reaper’… a HR manager who revels in dismissing the company’s employees.

Mayhem is a great cult classic that finds that sweet spot which we all have. If you’ve ever worked a job you have hated then Mayhem is the perfect antidote to vicariously live through. With great gags, some excellent fight choreography and a subject matter that strikes a chord with viewers and will make you want to go and kill your boss. In a good way!