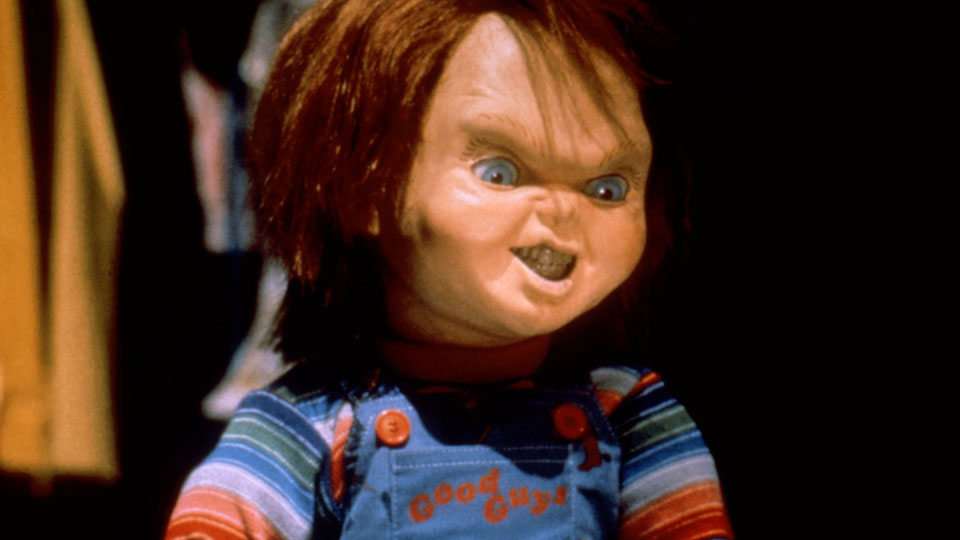 Four years after his last outing iconic killer doll Chucky is back in the seventh film of the Child’s Play franchise, Cult of Chucky.

The film premiered at Horror Channel FrightFest earlier this year and on Monday 23rd October 2017, it will be released on Digital Download, Blu-ray and DVD through Universal Pictures. The seventh outing is the craziest yet and a direct sequel to 2013’s well-received Curse of Chucky, which returned to the franchise’s horror roots.

As the seventh film is about to be released, we thought we’d take a look back over the history of the popular and much-loved horror franchise…

The original, and best, instalment of the series established Chucky as a horror icon. Released in 1988 the film gave the origins of criminal Charles Lee Ray getting trapped within the body of a Good Guy doll and unleashing havoc on Andy Barclay (Alex Vincent) and his mother (Catherine Hicks). Determined to get out of the doll’s body and use Andy’s as a new host, the film was seriously creepy with plenty of scares and horror along the way.

Child’s Play was a smash-hit taking over $44 million at the worldwide box office easily making a profit on its $9 million budget.

After the huge success of Child’s Play, a sequel followed in 1990 continuing the story of Andy Barclay. Now the youngster was in the foster system after his mother was put in a mental institution following the events of the first film. Play Pals, the company responsible for the Good Guy dolls, are trying to move on from their bad publicity and rebuild Chucky to try and understand what had happened during the original manufacturing. Of course Chucky is brought back to life and he locates Andy’s new foster family with the aim of transferring his sole to Andy’s body once again.

Whilst it didn’t gross as much at the box office as the first movie, Child’s Play 2 still made a decent profit on its $13 million budget taking an impressive near $36 million.

A third film was inevitable and it followed even quicker than the original sequel released less than a year after Child’s Play 2. This time round Andy is in Military School (and this time played by Justin Whalin) when the Play Pals factory goes back into action after an eight year gap and starts producing Good Guys once again. Using the same explanation for Chucky’s revival as the second movie, the killer doll once again tracks Andy down but this time he’s got his eye of younger schoolmate Tyler (Jeremy Sylvers). He’s also out to kill Andy and make him pay for the events of the previous films.

Child’s Play 3 was made on a budget of $13 million and only grossed $20.5 million at the box office. It was considered a disappointment next to the takings of the first two films and critics concluded that the franchise had run its course. In the UK the film received negative publicity when it was incorrectly linked to the Jamie Bulger murder by the press and branded a ‘video nasty’. It was eventually confirmed there was no link between the toddler’s tragic murder and the movie.

7 years after the box office disappointment of Child’s Play 3, Don Mancini rebooted his franchise with Bride of Chucky in 1998. Whilst still containing elements of horror, the film took a more tongue-in-cheek putting comedy at the forefront. The film also introduced Chucky’s former girlfriend Tiffany who he murders at the beginning of the movie and transfers her soul into a doll. The two murderous dolls then secretly hitch a ride with young couple Jade (Katherine Heigl) and Jesse (Nick Stabile) who elope and try to get away from Jade’s aggressive uncle. Chucky and Tiffany force the couple to help them get to Charles Lee Ray’s grave so they can retrieve the amulet that will let them transfer their souls to Jade and Jesse’s bodies.

Bride of Chucky went on to be the highest grossing instalment in the series taking a whopping $50.7 million at the worldwide box office. The film had the biggest budget of them all with $25 million so it was really as success as the original or the second movie, only doubling its original budget. Still it brought the series back to life and ended on a cliff-hanger that ensure a new movie would follow.

Largely considered to be the worst movie in the series to date, Seed of Chucky didn’t arrive until 2004. This time the film pretty much turned into a screwball comedy and saw Jennifer Tilly playing both herself, and Tiffany. This time the action takes place 6 years after Bride of Chucky. The killer dolls discover they had a child in the form of Glen/Glenda who seeks them out and wants them all to stop killing. Unfortunately Glen/Glenda is trying to suppress his own murderous tendencies and Chucky and Tiffany have another plan to get their family’s souls into the bodies of humans.

Seed of Chucky was made on a budget of $12 million and grossed a disappointing $24.8 million. Whilst it made back more than double its budget, the film was critically slaughtered and fans expressed disappointment that the film had lost its horror roots.

It took 9 years following Seed of Chucky for Don Mancini to resurrect his iconic character once again. Curse of Chucky was shown at various horror festival across the world and premiered at Film4 FightFest in 2013 before arriving on Blu-ray and DVD.

Curse of Chucky was a return to the franchise’s horror roots and a reboot of sorts. Chucky wreaked havoc for a new family who came together following the death of their mother. The central character was Nica (played by Brad Dourif’s daughter Fiona) who was terrorised by Chucky as her family members were picked off one-by-one.

The film connected back to the premise of the original when it was revealed that Chucky, when he was Charles Lee Ray in human form, was in love with Nica’s mother and murdered her father. He stabbed her mother while she was pregnant, resulting in Nica being born paraplegic. The opening moments of the original movie are what happened after he’d left his lover wounded.

Curse of Chucky was a hit with critics and surprised fans by bringing back Jennifer Tilly, in human form, as Tiffany and Alex Vincent, who played Andy Barclay in the first two movies.

The film was made for a budget of $5 million.

Due to the success of Curse of Chucky, everyone’s favourite wise-cracking killer doll returned this year for a seventh outing. Cult of Chucky debuted at Horror Channel FrightFest, where it went down an absolute storm. It’s without a doubt the craziest entry into the franchise yet and leaves things wide open for an eighth film.

The story of Nica continues in the movie after she’s been imprisoned for murdering her family. Her claims that Chucky did it result in her being put in an institution for the criminally insane and during her rehabilitation, Nica begins to worry that Chucky is back and after her once again.

Don Mancini once again helmed and wrote the film, honouring both the horror and the comedy that has been present throughout the franchise.

Cult of Chucky is released on Digital Download, Blu-ray and DVD on Monday 23rd October 2017 through Universal Pictures.

Check out all the theatrical posters for the Child’s Play movies in our gallery: