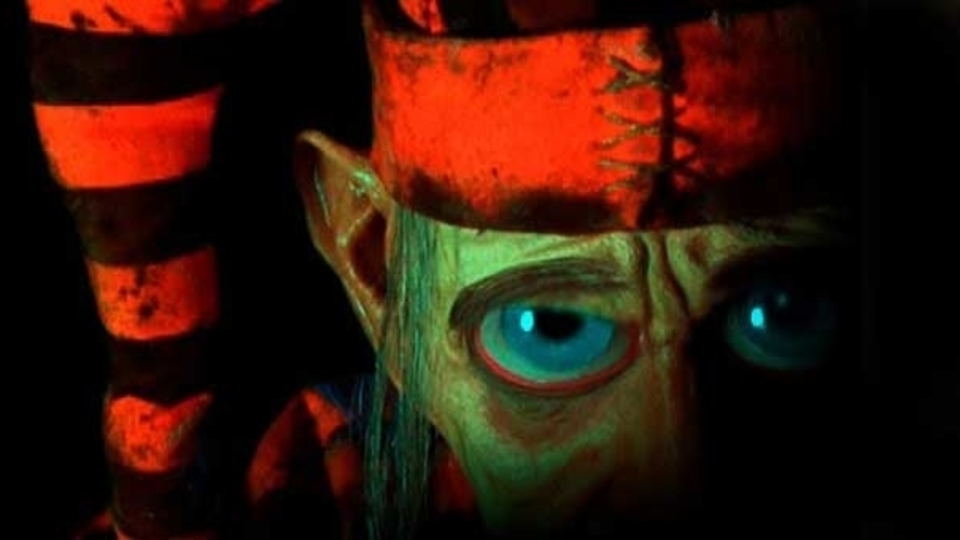 Caleb Thomas plays Tim, a 15 year old teenager who loves all things horror and spends his time drawing and sculpting monsters and playing scary pranks on the neighbourhood, something that hasn’t really endeared him to the masses. Coming from a broken home, his addict father Bobby (Angel’s Christian Kane) has left, leaving Tim in the sole care of his overworked but good-natured mother Linda (Chuck’s Sarah Lancaster).

After an encounter with a bunch of bullies, Tim finds a pumpkin on his way home. Battered and bruised, he wishes he could scare the bullies to death, as blood from his wounded sore seeps into the pumpkin. This summons the Trickster (think of a more sinister looking Dobby the House Elf). This mysterious creature encourages Tim to lure the bullies to his home where all manner of scares await them in payback. But will Tim get revenge, or has he just unleashed an uncontrollable evil onto the world?

The tone of the film is pitch-perfect and it utilises some great locations to evoke some classic Halloween-inspired nostalgia. There are a few nice in-jokes too, paying homage to horror classics from the past, and Todd Tucker has populated his movie with a great bunch of genre actors. I don’t understand why Sarah Lancaster isn’t in more projects; she’s a fantastic actress and does really well here as the long suffering Linda, who’s just looking out for the welfare of her son.

Eric Roberts and Christian Kane deliver memorable cameo turns and should have been used more. Caleb Thomas is believable in the lead role and Annie Read dutifully obliges as his would-be love interest that just happens to be dating the head bully. If there is a downside, it’s that the bullies are quite one-dimensional.

As the film goes on, you realise that the Trickster (played by genre legend Doug Jones) has his own agenda and his appearance alters as the film progresses. This is a great highlight of the film, and he looks terrifying as the film draws to its conclusion. The Terror of Hallows Eve also puts real stock into some practical effects and puppets and this gives the film a tangible, 70s and 80s quality that sets it apart from CGI heavy fare. Coming from a make-up and effects background clearly shows in Tucker’s approach to some of the scare sequences.

The Terror of Hallows Eve is a well-made horror that is perfect for the Halloween holidays. I would have liked a few more genuine frights thrown into the mix, but for a genre piece it certainly holds its own. I also really liked the ending, and its scope for a sequel, which I hope comes around soon.