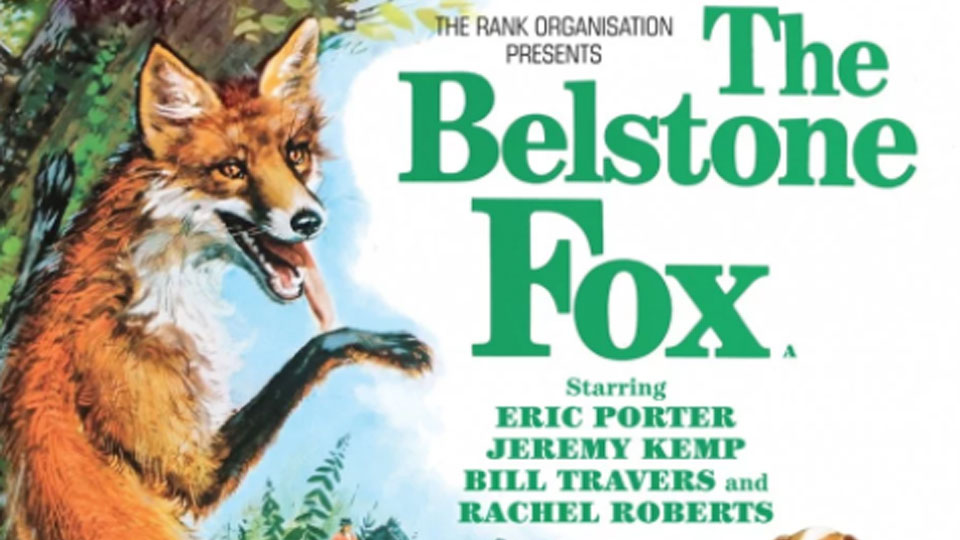 The Belstone Fox is a charming live-action British film from 1973, made by the Rank Organisation. It’s set in the English countryside and follows the adventures of a clever little fox whose life straddles that of the local huntsmen and their hounds as well as the wild.

When woodsman Tod (Bill Travers) finds a fox cub that has survived a brutal attack on the rest of his litter, he takes him to his friend Asher (Eric Porter) who happens to be chief huntsman for local squire Kendrick (Jeremy Kemp). Asher is humane, and takes the injured fox cub to the kennels, where one of the hounds has recently given birth to a large litter. The mother and siblings accept the fox as one of their own, and once Asher’s daughter Jenny (Heather Wright) names the creature ‘Tag’, he becomes an established part of the family.

It’s not all plain-sailing for the little fox, though. Even though the hounds accept him, he’s still a wild creature, and his misadventures try Asher’s patience. When the story reverses, the cunning fox is able to outwit the hounds, resulting in a game of cat and mouse between Asher and the fox.

The Belstone Fox is a beautiful, family-favourite story that doesn’t shy away from the problems of competing values or the harsh reality of the natural world. It was perfect subject matter for director James Hill, who had already created Born Free and Black Beauty. The astonishing achievement of the film is how successfully Hill tracks the shifting relationship between Asher and the fox, though he never loses sight of the mutual admiration and respect that exists both when they are friends and when they are enemies.

British actors in those days had incredibly interesting faces. Eric Porter, who scored a major success with The Forsyte Saga, was a terrific actor and is excellent in the lead role, and the camera loves his handsome, lined face. Jeremy Kemp has the kind of exaggerated features that you don’t see too often on screens these days, but he’s distinctive, and brings an enjoyable warmth to the amiable country squire.

One downside of the film is that Rachel Roberts (This Sporting Life) is under-used as Asher’s wife, with her role gradually diminishing. Since the film finds too much screen time for Jenny’s 21st birthday party, this is a shame, as less of the daughter and her relationship with the drippy Dennis Waterman, and more of the mother and her influence over Asher would have given more focus and depth.

Such criticisms may well pop into your head when viewing the film through streaks of tears – The Belstone Fox is a real weepie, and genuinely moving for anyone who adores or feels kinship with the animal kingdom. Be warned though: some scenes may be distressing for the sensitive, especially if you have strong views about fox hunting.

Overall, The Belstone Fox is a charming film that has been brilliantly and beautifully realised. Although the human actors are terrific, it’s the animals that are the real stars, and the footage captured by James Hill in simply incredible. Music lovers can also enjoy a sumptuous score by the legendary Laurie Johnson, who composed, amongst many other things, The Avengers and Dr. Strangelove. The Belstone Fox looks terrific in high-definition, and this release boasts a theatrical trailer and mute wildlife footage taken during the making of the film.

The Belstone Fox is released as part of Network’s The British Film collection.