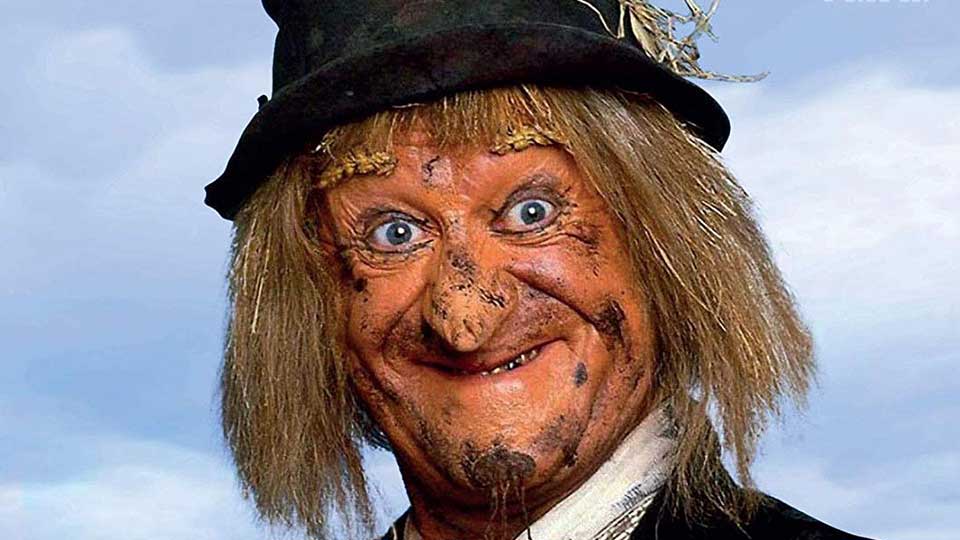 This boxset from Fabulous Films brings together the complete collection of Worzel Gummidge episodes from the 1970s and 80s, which starred Jon Pertwee as the eponymous hero.

Contained within this release are all four seasons from 1979-81, plus the recently-released Christmas special, as well as the two seasons of Worzel Gummidge Down Under, where the production was remounted in New Zealand during the late 1980s.

This boxset is a delightful treat for those of us old enough to remember the series the first time around, or who caught the repeats during childhood. There’s no other show quite like Worzel Gummidge: it combines the sinister aspect of animated scarecrows who can swap heads with a healthy dose of silliness and whimsy. Young children often didn’t know whether to laugh or hide behind the sofa.

For those who don’t know, Jon Pertwee (best-remembered as the Third Doctor Who in the early 1970s) plays Worzel Gummidge, a scarecrow created by the Crowman (Geoffrey Bayldon), and charged with standing in Ten Acre Field. The Crowman’s powers to create living scarecrows isn’t explained in any detail, but he also has the power to summon all scarecrows and is often subtly menacing, metering out punishments to wayward scarecrows. The object of Worzel’s affections – an apposite choice of words – is Aunt Sally (Una Stubbs), a wooden Victorian fairground antique. In reality, she’s as uneducated and ordinary as Worzel, but she has pretensions of grandeur, and rebuffs his endless offers of marriage, whilst he continues to follow her like a puppy, desperate to please, as they go on adventures together.

The show belongs to Jon Pertwee. Undoubtedly, his Worzel Gummidge is a virtuoso performance. Watching the show through adult eyes, it’s possible to see just how detailed and nuanced Pertwee’s portrayal is. There is a winning combination of his physicality, from the way he walks and the endless comedic facial expressions he pulls, to his vocal talents, which bring a distinctive sound to the character, and a range of emotions. It’s truly a complete performance that owes a debt to music hall and the era of the all-round variety entertainer. Sadly, those days are long gone, and it’s hard to imagine we will ever seen another complete characterisation in the manner of Pertwee’s Worzel Gummidge ever again.

It’s that aspect of it that reminds us that Worzel Gummidge is, alas, a product of a different century. Would it resonate with children today? With modern farming techniques, do they even know what a scarecrow is, or have they seen one in real life? How many people under the age of fifty even know what an Aunt Sally is? Add to that the washed-out colours of the film stock, and its hard to see today’s generation of youngsters connecting with the series.

Yet there is plenty in Worzel Gummidge to hook older viewers, especially those for whom the show offers the lure of nostalgia. The stories are full of wit, whimsy and pathos. Keith Waterhouse and Willis Hall are two fine comedy writers, and the standard of the scripts is very high for children’s television. Having said that, there is a certain recycling of plot elements. Though like a much-loved long-running sitcom, there’s comfort in the familiar situations, stock phrases and dependable characters.

The production was obviously high enough in calibre to attract some of the greatest actors of the era in guest parts. We especially enjoyed Beryl Reid, who pops up to play Worzel’s old mother (even though she was only a few weeks older than Pertwee). Connie Booth (Fawlty Towers) turns up as a rival to Worzel’s affections as another Aunt Sally, though this one is much kinder to him. There are recurring guest roles for Carry On stars Barbara Windsor (Saucy Nancy) and Joan Sims (Mrs Bloomsbury-Barton).

Credit must also go to Una Stubbs, who valiantly gives her all to the character of Aunt Sally, which never really develops, but she is an excellent foil to Pertwee. Geoffrey Bayldon (best-remembered as Catweazle) is deliciously sinister as the Crowman, wisely underplaying the part, rather than attempting to rival the large performances all around him. The children are dependable too – it was towards the start of Charlotte Coleman’s tragically short career.

Having been rested throughout the 80s, Worzel Gummidge Down Under doesn’t feel like an unnecessary addition to the original series. There’s a new set of children, and a new Crowman (Bruce Phillips), as Worzel struggles to adapt to life in ‘Zoo Nealand’, having followed Aunt Sally into the cargo hold of an aeroplane after she is sold to a private collector. The antics of Pertwee and Stubbs anchor the show in charm and familiarity in a different, though equally rural setting, but ending it at two series, a decade after the original run, feels about right.

Overall, Worzel Gummidge is first-rate children’s television and great family entertainment. It may well leave youngsters of today cold, but for those of us with fond memories of the show, it doesn’t disappoint all these years later. You’ll find yourself saying, “Well, I’ll be bum-swizzled!” Worzel Gummidge offers a comforting, daft, and endlessly entertaining world, with enough moments of creepiness to keep you on your toes. If you get your thinking head on, you may well work out it’s a great festive gift.