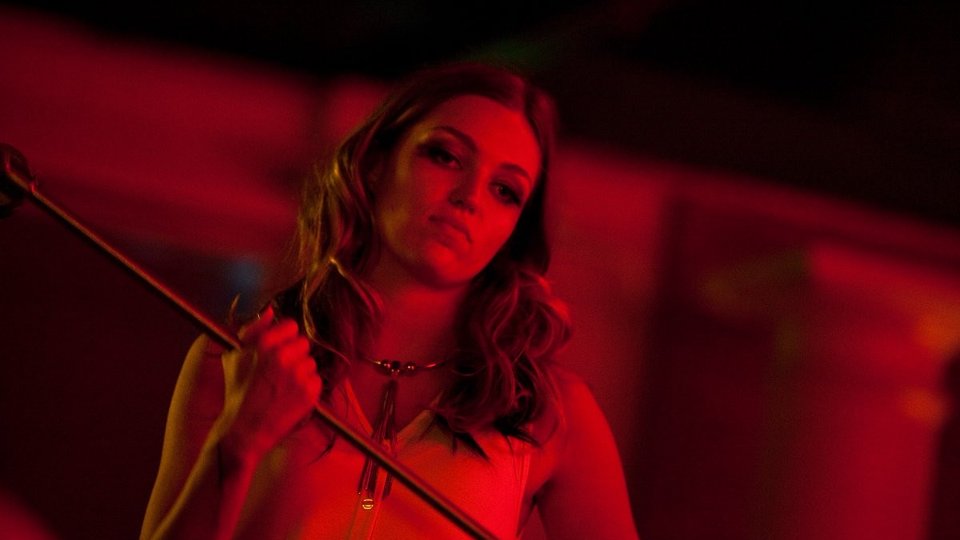 Harris (Jack Cutmore-Scott) enjoys the single life using a dating app to secure hook-ups with a number of beautiful women. Looking only for instant gratification, Harris is glued to the app as he arranges his next date and vows never to see the same woman twice. One of his matches on the app turns out to be feisty student Riley (Lili Simmons) who openly uses their first date to make her ex jealous by posting a seemingly loved up photo on her Instagram. The two hit it off and spend the night together but Riley doesn’t read the signs and continues to pursue Harris. Through sheer determination, she convinces him to meet again and Harris breaks his one night stand rule.

What follows is ‘Fatal Attraction for the Tinder generation’ as writer/director David Chirchirillo said at the end of the European Premiere of Bad Match this afternoon at Horror Channel FrightFest. He’s not wrong. The tropes from the obsession thriller are evident throughout the movie but Chirchirillo manages to do something a little different. From the first half hour the film seems clear cut as Riley plagues Harris with calls and texts, even pretending to be his Mom so she can get through to him at his place of work. Refusing to take no for an answer, Riley steam rolls all over Harris’ subtle hints that he doesn’t want to date her. Slowly but surely Harris’ life begins to turn upside down and he engages in a battle with Riley where the upper hand consistently changes.

Bad Match is a surprisingly clever film and even though there’s a plot point I saw coming, it still played out in a way I didn’t quite expect. The film is elevated by a sharp script, some unexpectedly funny moments and strong performances from its two leads. Many who see this film will know Lili Simmons for her work on Banshee and more recently Ray Donovan. She often plays devious characters but with Riley she’s able to embrace the pure crazy. In the hands of many actresses, Riley could have ended up being a stereotypical hot mess but thanks to Simmons, the character is interestingly layered.

Matching her beat for beat is Jack Cutmore-Scott who is perhaps best-known for Cooper Barrett’s Guide to Life. He is a revelation and his performance in Bad Match marks him out as someone to keep a close eye on in the future. Like Simmons he brings layers to his character that you don’t expect and his performance takes the character from playboy around town to near mad-eyed distress as his life starts to fall apart thanks to his dalliances with Riley.

Bad Match is kind of what I expected but if I’m being honest, it’s a lot better than I thought it was going to be. We may only be on Day 2 of Horror Channel FrightFest but I’ve already ear-marked the film as one of the festival’s surprises. Chirchirillo has put together a compelling and entertaining film on a tight budget (quite wisely when pressed after the screening he refused to confirm the amount) and it took most of the audience by surprise if the chatter afterwards is anything to go by. Bad Match is a superb movie marking Chirchirillo out as a talent with a lot of promise and it showcases the excellent abilities of both Cutmore-Scott and Simmons.