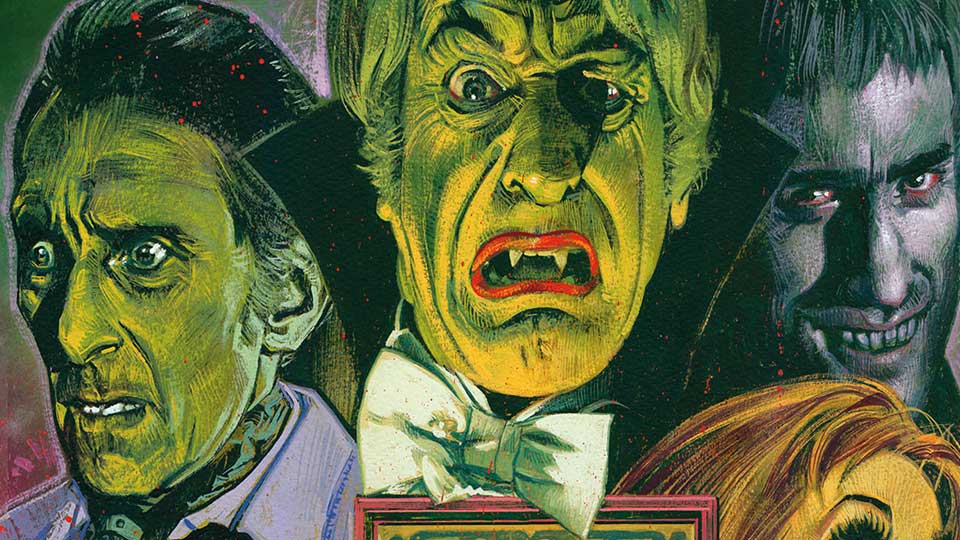 The House that Dripped Blood is a 1971 British anthology horror film from the Amicus studios. It is not dissimilar in style to their 1972 production Asylum, which we have also recently reviewed.

The over-arching story is that a police detective (John Bennett) investigates an old, delapidated country house. Speaking to his sergeant, he discovers that all previous tenants met violent ends.

In the first story, Denholm Elliott (A Room With a View) is a successful horror writer with a glamorous younger wife (Joanna Dunham). He looks for inspiration and starts to imagine he is seeing a ghoulish murderer which he calls ‘Dominic’ (Tom Adams). Though when the visitations become more terrifying, he wonders if he is losing his mind. The segment is perhaps the weakest, not least for its unlikely depiction of a writer, and the fairly well-trodden twist.

The film picks up in the second instalment, not least because it stars the wonderful Peter Cushing as a lonely man who becomes interested in a waxwork emporium depicting murderers. The proprieter’s wife, Salome, is captured in wax. She is very beautiful, and strangely life-like… Look out also for Joss Ackland as Cushing’s friend.

From one horror legend to another – Christopher Lee could have played the role of a severe widower, cold and distant with his young daughter Jane, in his sleep. Nyree Dawn Porter (The Protectors) is the girl’s tutor in a ‘The Turn of the Screw’-like scenario. A power failure leading to flashes of lightening across Lee’s granite face are among the iconic moments in the film. But why is it exactly that Lee keeps convulsing in pain?

There’s a strong shift in tone into comedy for the final segment. Jon Pertwee, who was starring in Doctor Who at the time, plays a hammy horror film actor who seeks real vampiric powers to revive his flagging fortunes. He features with Ingrid Pitt, who was in many Hammer films and starred opposite Pertwee in Doctor Who, as well as Amicus regular Geoffrey Bayldon, who is best-remembered as Catweazle.

Of course, the film rounds out in a ghoulishly predictable manner, with a nice nod to Dracula in the name of the estate agent of the unfortunate house.

Whereas some Amicus movies, such as Asylum, were very tightly put together, The House that Dripped Blood isn’t quite as clever, and has moments where the action sags. Nevertheless, director Peter Duffell is able to keep the viewer’s interest, and horror-specialist Robert Bloch’s script has enough high points to leave an overall favourable impression. As usual with Amicus output, the finished product is astoundingly cinematic and polished considering the tight shooting schedule and relatively miniscule budget. The House that Dripped Blood undoubtedly deserves its reputation as a cult classic British horror film of the Grand Guignol style.

This limited edition high definition Blu-ray release from Second Sight Films comes in rigid slipcase featuring new striking artwork by Graham Humphreys, as well as a 40-page booklet and reversible poster. Extras on the disc include the featurette ‘A Rated Horror Film’, which captured the thoughts of actor Geoffrey Bayldon and director Peter Duffell before their recent deaths, and includes archive footage of Ingrid Pitt (who died in 2010). There’s also audio commentaries with director Peter Duffell and author Jonathan Rigby, as well as another with Troy Howarth. You can find a ten-minute interview with assistant director Mike Higgins. Fans of Amicus movies or classic British horror will especially enjoy this highly collectible release.