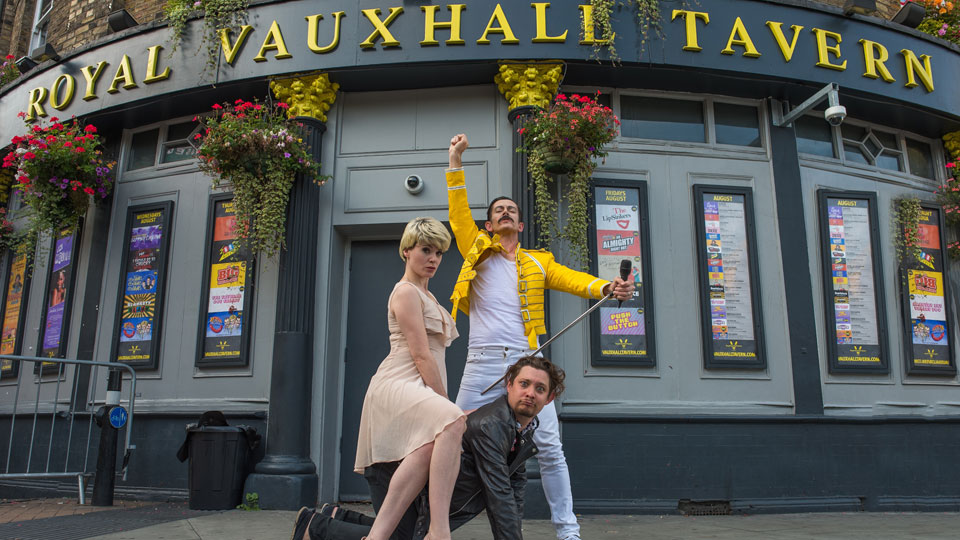 In 1988, Freddie Mercury and Kenny Everett reportedly helped Princess Diana escape the pressures of palace life by dressing her in drag and smuggling her into London’s notorious gay pub: the Royal Vauxhall Tavern. Twenty years after her untimely demise and based on real accounts, Royal Vauxhall commemorates Diana’s death by reliving the night of her life.

As the princess, the clown and the rock king sing, drink and dance together, their wild night unfolds as the weight of responsibility and the spectre of AIDS looms over them.

Now the stuff of urban legend, details of the trio’s night at the Royal Vauxhall Tavern first came to the fore in the 1998 autobiography of Cleo Rocos: the longtime collaborator of Kenny Everett. Royal Vauxhall irreverently opens up this infamous evening as three high-profile friends explore their sexuality, their mortality and the claustrophobia of royal family life.

Royal Vauxhall was developed and first aired at the Royal Vauxhall Tavern, the celebrated gay pub where this notorious event purportedly took place, and one of the few iconic gay cabaret venues still standing. The show was written partly in response to the widespread closing of iconic gay and gay friendly pubs and clubs in London and around the country. It explores the need for safety and sanctuary for minority communities, as well as for famous people who need a place to hide.

In this article:Freddie Mercury, Royal Vauxhall