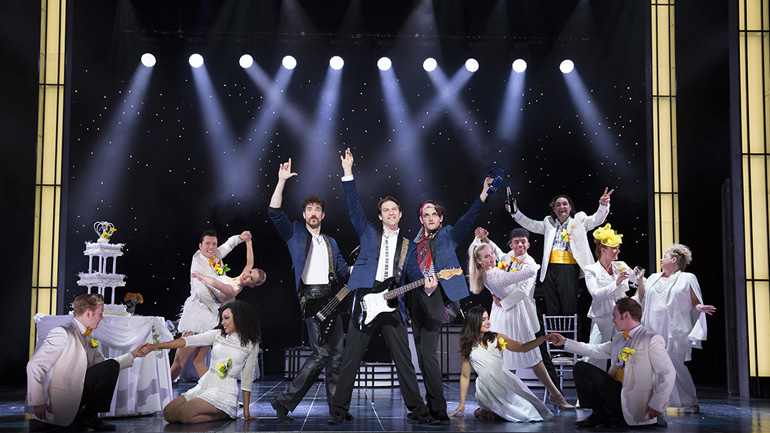 The Wedding Singer drops into Leeds Grand Theatre this week as part of a national tour. Adapted from the Adam Sandler vehicle of the same name, the show features the talents of Jon Robyns, Ray Quinn and Ruth Madoc.

It’s the mid-Eighties and Robbie Hart fronts the band Simply Wed, a struggling four-piece kept in business by wedding parties. As his fiancee jilts him at the altar, Robbie re-evaluates his purpose in life and decides to make some drastic changes. Amidst a crisis, he soon falls in love with Julia, but the only problem is she’s set to marry boarish bully and tycoon, Glen.

Set against an Eighties backdrop with a bounty of references to the era that taste forgot, The Wedding Singer is an upbeat and fluffy musical adaptation of the US comedy flick. Crammed with over twenty-five original numbers, the show offers a genuine Eighties flavour, with a valorous musical arrangement complete with sweeping synth, electric guitar and poppy percussion.

Unfortunately, aside from the upbeat opening number (and recurrent theme) of It’s Your Wedding Day, the numbers are mostly forgettable. All About The Green is one of the more successful outings, providing Ray Quinn and the ensemble with the opportunity to exercise their vocal muscles. Saturday Night in the City also succeeds, crucially, in ending Act I on a high-energy cliffhanger.

The Wedding Signer is saved thanks to a strong, solid cast. Jon Robyns is instantly likable as Robbie, showcasing a clean and crisp vocal range which is the ideal accompaniment to Cassie Compton as the cute, sugar-sweet Julia. Ray Quinn is ideal casting as the overly confident Glen, whilst pocket-sized comedy legend Ruth Madoc steals scenes as a hip and bawdy grandma. Whilst the characters are thinly written, there is a real glint of charisma in every performance which elevates the production beyond the shallow scope of the script.

Supporting performances are also strong and offer plenty of points of interest. Samuel Holmes provides flourishes of detail in his campy, yet subtle performance as George, which is showcased in a particularly well-choreographed routine in a bar. Mark Pearce also shines here as one of several characters he assumes, brilliantly excelling in comedy grotesques.

Video effects credited to Jack Henry James were absent in this performance, coupled with some notably ropy follow-spot action, drawing unwanted attention to a rather sparse and threadbare set. Thankfully, the strong cast of energetic and upbeat performers rescue this show, ensuring that audiences come away feeling well served and satisfied.

The Wedding Singer is an entertaining, humorous and lively musical. Much like the era it parodies, it’s not all realised in the best taste and whilst much of it is instantly forgettable, there are still plenty of rousing interludes to sate those with a nostalgic appetite.

Samuel Paynehttp://samuelpayne.weebly.com
Reviewer of Theatre in the North, including releases of classic film and television.
Previous article
Royal Vauxhall in UK tour
Next article
Queen of Chapeltown at West Yorkshire Playhouse