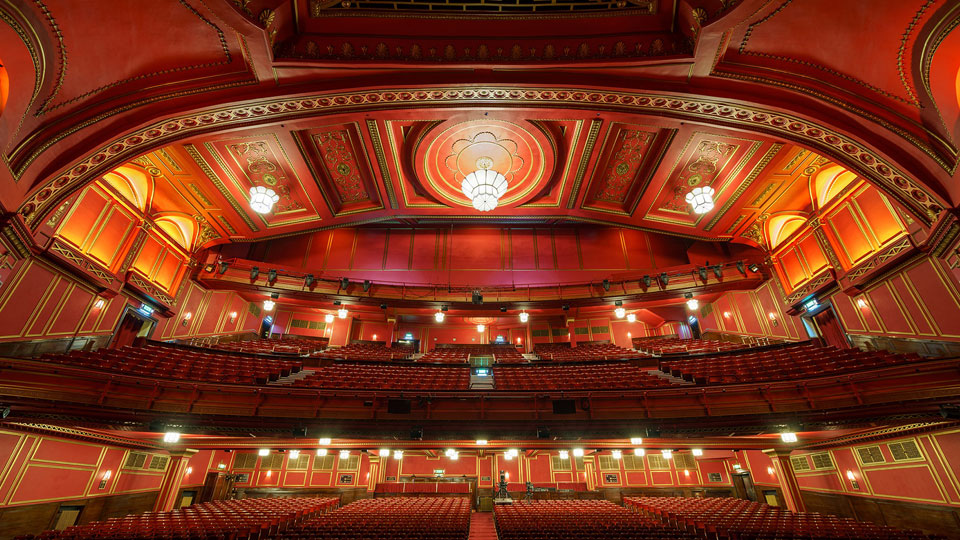 London’s Dominion Theatre, home to Christopher Wheeldon’s adaptation of Hollywood musical An American in Paris, has completed a £6 million restoration and unveils a brand new double-sided LED screen on Tottenham Court Road, the largest and highest resolution projecting screen on the exterior of a West End theatre.
The extensive restoration of this landmark Grade II listed building, which sits majestically at the junction of Tottenham Court Road, Oxford Street and Charing Cross Road, was started in 2014 and is now finally complete with the unveiling of the beautifully restored theatre façade and brand new digital screen. All areas of the theatre were involved in the full renovation, including the installation of a new flying system and the enlargement of the orchestra pit to facilitate large scale productions, and a full refurbishment of all five bars and ninety-five toilets front of house. Nearly 1.2 acres of bespoke carpets were laid front of house and over 400 gallons of paint used in the reconditioning of the gold detailing and plasterwork of the proscenium arch, auditorium ceiling, foyers and hospitality suites. All of the theatre’s seats were reupholstered and additional French polished handrails added to aid accessibility inside the auditorium. The electrics and lighting fixtures also received an overhaul with the use of enough cable to stretch 4500 times the length of the Eiffel Tower.

An American in Paris has been ecstatically received by audiences and critics, earning an incredible 28 five star reviews when it opened at the Dominion Theatre in March this year. It has now extended booking though to the end of January 2018.

See AnAmericanInParisTheMusical.co.uk for more details and to book.

In this article:An American in Paris, Dominion Theatre