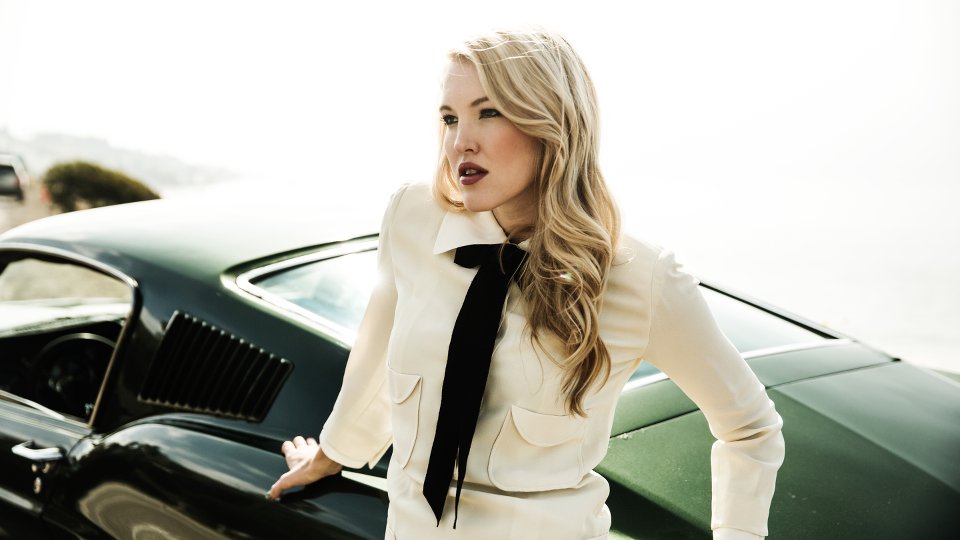 Ashley Campbell is preparing to launch her debut album and she’ll be coming over to the UK to preview material from it at Nashville Meets London later this month.

In 2016 Campbell performed at C2C: Country to Country, introducing fans to her material and showcasing her incredible banjo skills. Her single Remembering was well-received and since then she’s released a cover of Wichita Lineman, originally recorded by her father Glen Campbell.

I caught up with Campbell to find out what we can expect from her Nashville Meets London performance, get an update on the status of her new music, and to discuss her long love affair with the banjo.

You’re coming back to the UK for Nashville Meets London. What can we expect from your performance?

I’m bringing a couple of band mates from the States so we’re going to play an acoustic set. It’ll be a lot of banjo, guitar and I’ve got a dobro and a fiddle player so it’s going to be a really broken down rootsy vibe.

You were last in the UK in 2016 for C2C: Country to Country. How did you find UK Country music fans while you were over here?

They are some of my absolute favourite country music fans I’ve ever come across. I think people in the UK really cherish the entire album as opposed to just being fans of the singles. I think they’re a lot more intense music fans and I appreciate that a lot.

One of the things we often get told here in the UK is that Country music fans do their research. They know the words to every song. Were you surprised at just how passionate and knowledgeable the UK fans are?

It’s a very happy surprise. It’s so refreshing to see fans of music. People in the States are definitely fans of music but I feel like it’s more of a listening audience in the UK for sure.

Last time we saw you here in the UK you were promoting your single Remembering. What have you’ve been doing with your music since then?

I just recorded and finished my debut album. I started recording in November and I’ve been working on it ever since. I’m just finishing it up and getting ready to put it as soon as possible. I also have a single coming out. It’s a cover through Amazon Music of the song Highway Man by Jimmy Webb. OK so I’ll be looking out for that man so that we can tell everybody about it. I’m so excited to finally get an album out since the point now where you can get your music out.

Are you excited to finally get a full album of your music out there to your fans and show people who you are as an artist?

Absolutely. I’m so excited to finally get to show people who I am and for people to be able to get to know me as an artist with a full album, of so many different colours and emotions. I’m really excited to put it out.

What would you say was the most challenging aspect to writing and recording this album?

This is my first album so it was really just finding my sound. I actually recorded it with my brother Cal, who lives in California. We recorded at his home studio and we were really able to explore and experiment with the sound and the vibe that we wanted for the album.

Let’s talk about your banjo skills because obviously everyone knows you’re an incredible banjo player! How long have you been playing the instrument and what is it you love about it?

What advice would you give to somebody that wants to start out playing the banjo?

I would say listen to songs and try to mimic what other people do. Your own style will come out of learning from other people and trying to copy and learn different styles for sure.

You come from a very musical family. Does that put more pressure on you in terms of releasing your own music?

Coming from a musical family I learned not to compare myself to other people in my family, who I won’t name (laughs). My dad is his own thing and I would never even dream of trying to be as great as him but I can just be the best version of myself. I don’t feel a lot of pressure to live up to something as it were. I just want to be the best musician and songwriter as I can be and just express myself truthfully. I think that’s all I can do.

Which part of being a musician do you love the most? Is the writing and recording or is it being on stage and playing to audiences?

It’s all part of the charm for sure. I think the biggest payoff for me is playing the music for a live audience and getting to see their reaction and hearing how the words that I wrote and the the music that I play, affects other people emotionally. It’s just wonderful. My songs are my take on a specific emotional experience. When you hear a song, you put it into your own life and interpret it with your own feelings. I love seeing people do that with my music.

Earlier this year you collaborated with Nashville star Charles Esten on the song Prisoner. How did that come about?

Charles and I kept saying that we should write together. He’s got a very busy schedule with filming the TV show and touring with his own music. He called me at eleven at night one time and said ‘hey I’ve got a free day tomorrow, what are you doing? Do you want to write?’ We wrote that song. He’s been putting out a single every week and he asked if we could we put it out. We got to perform together at the Opry.