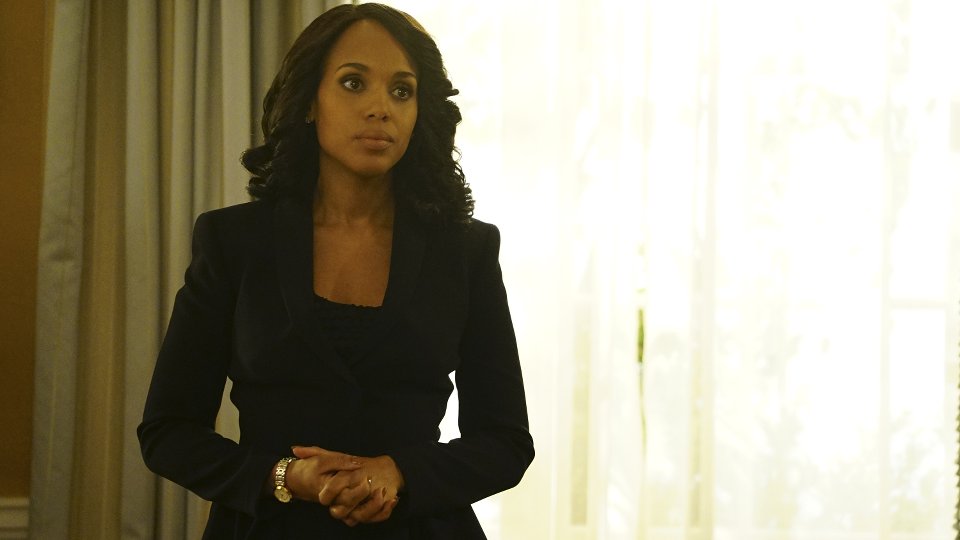 Scandal recently came to the end of its sixth season and it has been announced that the upcoming seventh season will be the show’s last.

If you haven’t seen season 6 of Scandal and want to avoid spoilers, stop reading now. If you have seen it and want to hear our thoughts on the final season, keep reading.

Season 6 came to a shocking close as it was revealed that Luna Vargas (Tessie Santiago) was behind the planned assassination attack of Mellie (Bellamy Young), which was due to take place during the inauguration. Olivia (Kerry Washington) and Jake (Scott Foley) prevented Luna from doing any more damage by forcing her to commit suicide as they watched on.

After the shocking twist, Olivia realised that while Luna may have gotten in too deep she wasn’t alone in her evil plot; Cyrus (Jeff Perry) was responsible for putting illusions of grandeur in her head and turned out not to be as squeaky clean as he’d professed all season.

Elsewhere in the season finale Olivia was enlisted by Fitz (Tony Goldwyn) to head up a revived version of B613 and she got Mellie to agree to fund it by tricking her. Also Quinn (Katie Lowes) officially took over OPA while Olivia embraced her dark side and took control of the White House under the guise of being Mellie’s Chief of Staff.

With only one season to go, there’s a lot of potential for crazy plots twists, shocking moments and some really good, edge-of-the-seat story-telling.

1. Olivia to fully embrace her dark side. Hands up, who ever really thought Olivia was a good person? Oh right, nobody. That chilling final scene suggested that Olivia was going to push her own agenda by using Mellie as she attempts to grab more power. I like the idea of Olivia being the Big Bad of the final season.

2. As little B613 as possible. The moment that the organisations dreaded name was mentioned, I could hear the sigh of millions of Scandal fans. The plot was tiresome the first (second, third…) time round so it’s not going to be any better with another outing. I can kind of see the logic of the writers but I hope B613 disappears as quickly as it returned.

3. Mellie to emerge victorious. Of course Mellie isn’t exactly whiter than whiter when it comes to her past behaviour but I can’t help but root for her to make a real stab at being President and affecting some good change. When she finds out that Olivia is using her, I want fireworks and some great powerful scenes for the fantastic Bellamy Young.

4. Cyrus to get something to do. He’s one of the best characters in the show and shapeshifts on a weekly basis so it was a shame that he was so drastically underused during season 6. Once he was cleared of Frankie’s (Ricardo Chavira) murder, Cyrus was completely side-lined but somehow always still part of Fitz’s inner circle (yeah I don’t get it either). With his evil tendencies and Olivia’s dark plotting, they could make a formidable team.

5. Jake to serve some kind of purpose. In season 6 he was literally around only to serve as a henchman for anyone that needed something bad doing. The love triangle with Olivia and Fitz has run it’s course and honestly as much as I love Scott Foley, it feels like the show should have cut the character loose a few seasons back. That’s obviously not going to happen so if Jake is part of the show, he should actually get something meaningful to do.

6. Abby (Darby Stanchfield) and David (Joshua Malina) to get back together. That cute moment where the former lovers bonded over having a woman’s head in Abby’s fridge was (against all odds) very sweet and reminded me how much I loved the two characters together.

7. Rowan (Joe Morton) to be used sparingly. We’re never going to get away from Rowan popping up but he doesn’t need half as much screen time as he gets. While his monologues used to be fun, now they’re tedious and unnecessary. He’s another character, like Jake, that’s served his purpose so I hope we don’t see too much of him.

8. The Quinn, Huck (Guillermo Diaz) and Charlie (George Newbern) love triangle to resolve itself. It feels like Quinn and Huck have a lot of unfinished business but with Charlie being promoted to a series regular, I have a feeling this love triangle will play out for a while yet. I don’t want Quinn and Charlie to make it down the aisle because I think she’s a much better match for Huck.

9. Marcus (Cornelius Smith Jr) and Mellie to reunite. It was an unexpected pairing that surprised me in terms of how much I cared. Marcus is still the cleanest of the Gladiators/entire cast of characters/people in Washington D.C. and I actually liked the sensitive way he and Mellie interacted once they got past their initial bickering.

10. Some proper OMG moments. Remember when Scandal left your jaw on the floor (in a good way)? The series has tried too hard over the years to be ‘crazy’ and it’s not always succeeded but around season 2 it was must-watch TV. Get back to those halcyon days of truly inspired twists and shocking moments.

Scandal is expected to return to ABC in the US and Sky Living HD in the UK later this year for its seventh and final season.