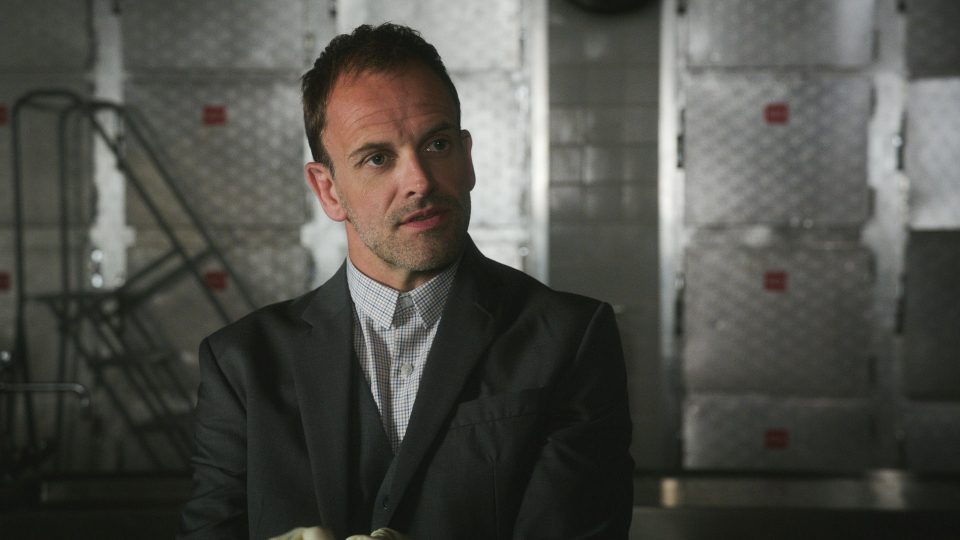 On the season 6 premiere of Elementary, Holmes (Jonny Lee Miller) and Watson(Lucy Liu) were hired by a reformed party girl heiress to find her missing partner in a years-old sex tape that has just leaked online.

If you’re not up to date with Elementary and like to avoid spoilers we suggest you don’t read any further.

The premiere opened up with Sherlock lay on an autopsy table while waiting for the results of his tests. He was avoiding home and when the call came in he headed off to find out if they had uncovered anything.

Meanwhile, a guy called Sammy Olivetti (Trevor Van Uden) was trying to get a sex tape, that he was in, taken down off the web. During the night he got up for a drink and found his kitchen lined in plastic. An intruder appeared and hit him hard in the head with an implement, blood sprayed on the plastic sheeting.

At the precinct, Watson met with a woman called Sophie Bishop (Trieste Kelly Dunn). She was the woman in the sex tape and wanted help tracking Sammy down as he was missing. The tape went against the conditions set for an inheritance she was due so she needed the tape removing from the web.

Sherlock arrived late for the meeting and Watson took him aside afterwards. She wasn’t happy about his recent behaviour. Sherlock promised to tell all at home but Watson pushed to talk at the precinct. Sherlock told her that he wasn’t well and that he would tell her everything back at the Brownstone.

Back home, Sherlock explained the symptoms he had been suffering, from headaches to memory loss and hallucinations. His many tests had come back negative and the doctors felt that he had a condition called Post Concussion Syndrome (PCS). It was caused by the many blows he had received to his head over the years plus his drug use. He was really worried he wouldn’t be able to carry on his work if he didn’t get better. Watson gave him a hug which he found really awkward.

The pair headed to Sammy’s house to check it out. Sherlock noticed the smell of plastic and spotted adhesive marks around the kitchen. Watson suggested the room had been covered. Holmes spotted a small drop of blood on the floor. Back outside Sherlock took a call from someone using a voice scrambler. They offered $1 million for them to stop investigating the case. Sherlock gave them account details but said they wanted $5 million. The money was transferred.

Later, Sherlock attended a sobriety meeting. He spoke about his recent experiences. Afterwards, a man called Michael (Desmond Harrington) introduced himself and said that Sherlock had helped him with a speech he’d given some four years earlier. Michael left Sherlock with a business card and offered to return the favour if Sherlock ever needed to talk.

Sherlock met with Sophie’s brother to accuse him of leaking the sex tape to cut her out of the inheritance but he denied it. Watson met with Sophie but struggled to find much out. Later, Detective Bell (Jon Michael Hill) called to say that Sophie had been found dead.

Captain Gregson (Aidan Quinn) and Sherlock called Sophie’s husband in for questioning and accused him of leaking the tape to get a $60 million payout. They also thought he had murdered her and Sammy. He admitted to leaking the tape but said he didn’t murder them.

A new witness turned up at the station, a woman who had also made a sex tape with Sammy. She was worried that she would be targeted next by the murderer. She gave Sherlock her phone with her tape on it and he spotted something interesting.

Later, they called Sophie’s husband back in with his lawyer. Sherlock had uncovered that Sammy had a CCTV system installed that activated when a deadbolt was used on the front door. In the CCTV footage they had found the video of Sophie’s husband killing Sammy.

At the end of the episode, Sherlock decided to give Michael a call. Michael seemed out of breath and said he was out walking. After agreeing to meet he ended the call and it was revealed that Michael was digging a grave for a woman who he’d presumably killed.

The official synopsis for Elementary 6×02 reads:

Watson and her half sister, Lin, have conflicting reactions when their estranged biological father dies.

Tune in to Sky Living HD at 9pm on Monday to watch the next episode. Preview it with our gallery below: