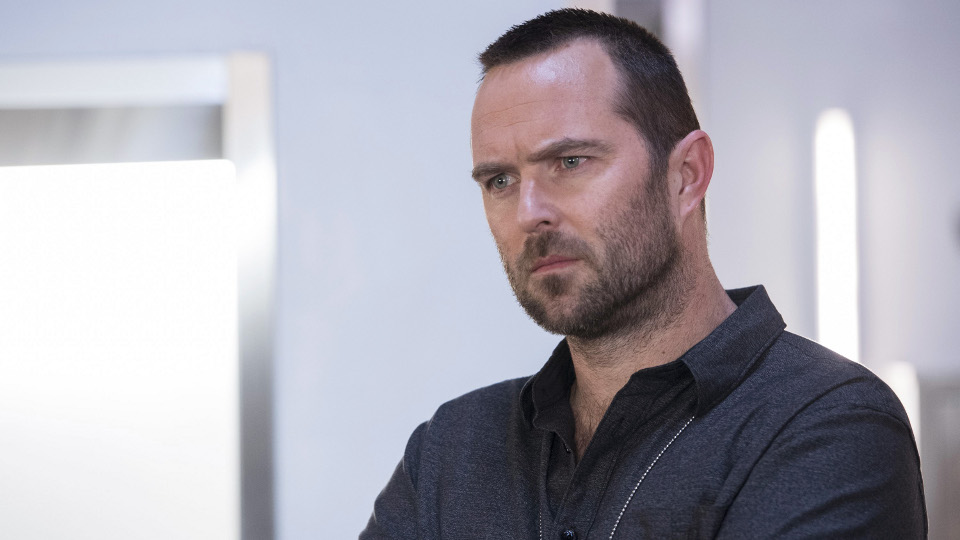 On the latest episode of Blindspot, Jane (Jaimie Alexander) and Oliver (Jonathan Patrick Moore) found themselves in a dangerous situation.

At the end of the last episode, Jane and Oliver were shot with tranquilizer darts and kidnapped. The latest episode opened up with the pair waking up in bed next to each other in a mysterious cabin.

They were still groggy and disoriented but soon remembered what had happened. Oliver tried to exit the room but found the door handle electrified. There was also a security camera on the ceiling enclosed in a cage.

Jane and Oliver still don’t know each other all that well and each thought they were responsible for their current situation. Oliver said something about how they would freeze if they escaped which made Jane think he was in on the kidnapping. It turned out that it belonged to his missing father.

A voice came over an intercom to give Oliver a task. Whoever was holding them wanted Oliver to read a note to the camera. It was to knowledge the crimes of his father, Magnus Steele, who had stolen $200 million.

Meanwhile, at the FBI, everyone was unaware of the kidnapping. Nas (Archie Panjabi) had retrieved some data from the hard drives found at the Sandstorm meeting place. On there she found digital copies of forged passports for Shepherd.

Interestingly there was only one for Roman (Luke Mitchell) and that turned into a lead. It had been used for a trip to the Bahamas and surveillance footage showed him at a bank. Further investigation uncovered that during his visit $33 million was taken from a trust fund owned by a deceased person. She wondered if Roman had killed the owner to get the money.

Back with Jane and Oliver, she proposed destroying the security camera to try and draw their captors to them. It worked but there was too many to fight off. They then made Oliver read a ransom note on camera which is posted to YouTube. At the same time another team have children held hostage in a different location. They belong to a woman named Edith who was working with Steele.

The FBI found the video and noticed Jane stood in the background. Weller (Sullivan Stapleton) realised what had happened and knew the kidnappers were trying to play Edith against Steele to see who would pay up first.

They managed to quickly locate Edith and brought her in to prevent her paying the ransom. She gave them the news that Steele had been hiding in Switzerland but died from cancer six months ago.

Jane and Oliver managed to escape the room via the chimney. They were then able to gain access to a room with a phone. The kidnappers found them before she could raise an alert with her team.

Next she convinced their captors that they were going to call a voicemail monitored by Steele. They agreed to let Oliver make the call and he rang his father’s old voicemail. Jane interrupted him and left a message full of keywords about Sandstorm that would cause the call to be picked up by the FBI.

Of course it worked and Patterson (Ashley Johnson) picked it up. They brought Roman in to hear it and he noticed the final sentence was strange. Patterson pulled out the first letter of each word and it formed a new sentence telling them the location of the children. The team rushed to rescue the children and killed their captors.

As soon as Jane found out the children were safe, she and Oliver tried another escape. They took out several of their captors, including one which Oliver impaled on a set of antlers hung on the wall. Jane was then able to talk the man in charge out of killing Oliver. His sidekick, upset at the thought of not getting the money promised, killed the man in charge and took over.

Oliver said he couldn’t get hold of as much money as the man wanted but a charity of his held over $50 million. They would need to get to the charity’s office and have a second board member authorise the transaction. Before they left Jane scratched the logo of the charity onto a sofa. Shortly after they left the team arrived and Tasha (Audrey Esparza) recognised the logo.

At the charity they found a woman to help with the transfer but she was panicking and couldn’t remember her password. Oliver put up a fight and grabbed the man’s gun. Outside Jane heard the gunfire and took out two men watching her with a knife.

With everything resolved they returned to the FBI. Oliver headed home and wanted to be alone. Weller decided it was time to release Roman on house arrest, much to his and Jane’s delight. At the safe house Roman recovered a memory of the Bahamas trip that the trust he took money from was in Jane’s real name – Alice Kruger.

Elsewhere in the episode, Weller pulled Reade (Rob Brown) in for a chat. Tasha had told him about Reade’s drug problems so he wanted to try and help. Weller suggested he take some time off to get things straight.

Weller tried to stay calm and keep Reade in a job. However Reade flew off the handle and quit on the spot. As he stormed out he told Tasha to ‘Go to Hell’.

Later, while drowning his sorrows in a bar, Read spotted a drug deal going down. He followed the guys outside and asking if they could help him party. Unfortunately for Reade one of them recognised him as a cop and they gave him a kicking.

Reade wasn’t the only one with personal issues this episode. Patterson decided that with Borden dead she no longer needed therapy. She told this to Dr. Sun who disagreed.

Back at home, Patterson tried to relax by playing Xbox. Her controller needed new batteries and while looking for some she came across the copy of The Oregon Trail that Borden gave her.

Completely paranoid since the tracking device in her tooth she cut the disk open to check for bugs. This then led to her ripping her whole apartment to pieces as she searched further.

At the end of the episode, Weller and the entire team were served. They were to be investigated for helping a terrorist organisation.

The next episode is Senile Lives and here’s the official synopsis:

Under investigation by an old rival, the team struggles to defend itself. Meanwhile, a tattoo leads them to a mysterious death at a foster home.