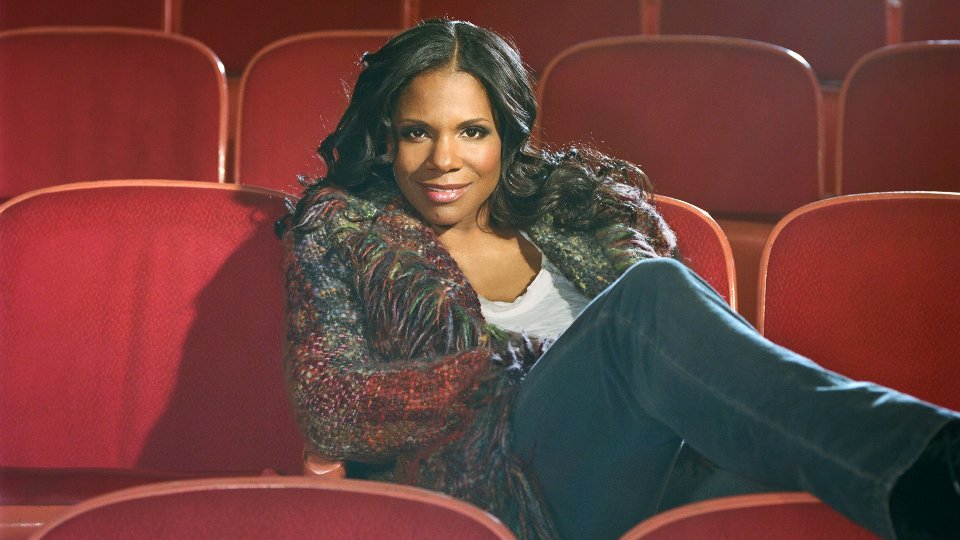 Audra McDonald is a six times Tony Award winner. She is one of the greatest performers to have ever graced Broadway and she is currently in London for four nights, performing at the Leicester Square Theatre. Having heard how her shows last year went and of how amazing they were, I was very eager to watch her live. Playing the piano and asking her the questions was Seth Rudetsky, and Will Swenson made a guest appearance.

Audra’s voice is a wonder, which free falls from her mouth the moment she opens it. It is full of enormous power and the words dance from her tongue. Her style of singing though, is undoubtedly operatic, done in a musical theatre style. I noticed this within a few bars of the first song. It came as quite a surprise that Audra said that she didn’t miss singing in an operatic style, as her heart belonged to musical theatre. The sound through most of the songs was purely operatic. I enjoyed her natural singing voice when she performed The Rose, I actually loved this and I would have enjoyed to hear more of that style.

I didn’t like the part of the show where she sat down on the couch to answer questions from her long-time friend Seth Rudetsky. As they’ve been friends for so many years, it would only be natural for them to relax on stage together. But this lead to me feeling that the show was far too casual and far too relaxed and this lets the show down. It sometimes felt like a rehearsal and that they were just going through the motions. He asked her: ‘tell me what you like about London, why you enjoy performing here and la la la la la la’. This was asked hurriedly with exaggerated arm movements and I was half expecting him to give an eye roll to follow it. It was as if to say: yeah, we’ve talked about this a million times in every city that we’ve been to and it’s exhausting for both of us, but just answer the question. It might have been interesting for us Londoners to hear, as up until last year, she hadn’t performed here for over 15 years.

Before briefly exiting the stage to make way for Will Swenson who gave brief guest appearance to sing a few songs – she said that she was off to check on her baby. I have by no means any problem with this at all, but announcing it on stage seemed somewhat strange. But then maybe, I thought that perhaps we place these kind of performers on too high a pedestal? We view them as sub-human, but to me, it didn’t really seem professional. It was moments like this that made the show feel like a rehearsal. And the brief slot that Will was given didn’t make any sense to me, especially as he has taken time out from his current show to take part in this show.

Ryan Gosling was incorrectly referred to as Ryan Reynolds, when she talked about actors who had previously had theatre training (referring to La La Land). Ryan Reynolds and Ryan Gosling are both incredible, but, very, very different people. But seriously, to get them mixed up? Yes, we’re all human and we all make mistakes, but I found that to be extremely poor. Recalling the time that she worked with P.Diddy/Puff Daddy/Sean Combs and telling people in the audience ‘in case you don’t know who he is, he is a music artist and mogul’ before giving us more information about what work he has done and who he has worked with. He is a man that needs no introduction or an explanation of the back catalogue of his work, not unless you’ve been living under a rock for the past two decades.

To criticise aspects of her show and of knowing her importance in musical theatre/Broadway history almost feels like sacrilege. But on this occasion, I didn’t leave the theatre feeling like I should, when in the presence of someone so talented who is an outstanding performer in her Broadway shows. Yes, she is one of the best, but for me, this show didn’t work. Unfortunately, I was also surrounded by a small handful of vulgar and extremely pretentious individuals, who really spoilt my experience. You know when you go to a restaurant and the ambience is off, even though the food is great? That. Of course, this wasn’t Audra’s fault and she was as down to earth as you could get, even when recalling the times that Liza Minelli and Barbara Streisand came to watch her shows! Maybe they should have taken note.

Audra closed the show with Summertime, which was just stunning and her relaxed demeanour made this appear effortless and fluid. Audra came across as humble and warm. Her voice just skyrocketed out of her mouth whenever she wanted it to. Her facial expression matched the tone and content of the songs amazingly and she completely immerses herself in to every song and word. There isn’t anything that she can’t do when it comes to the tones, adding colour and adding variety to her voice. Her singing is poetry in motion. I just don’t think that the show was in any way special enough to match the talent that she has and the work that she has previously done for her to be dubbed ‘Miss Broadway’.