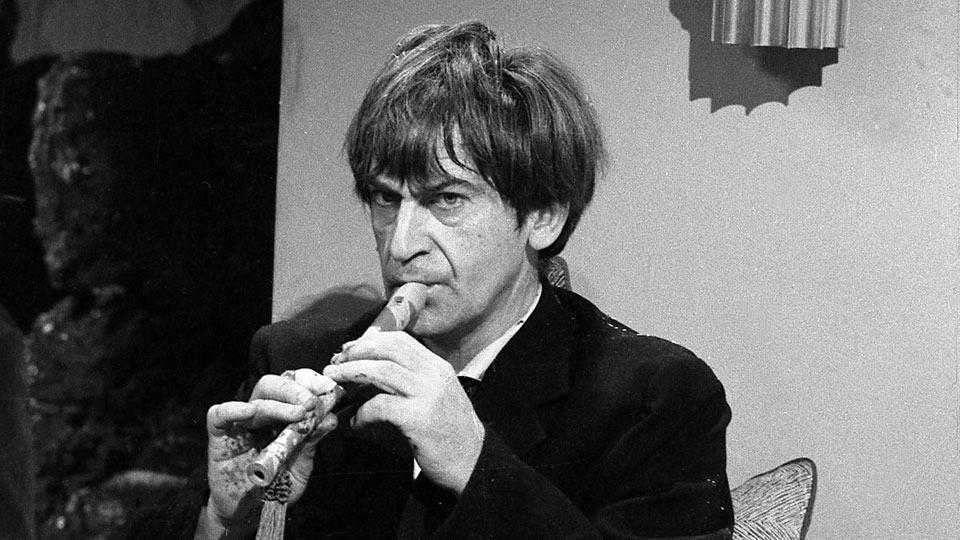 When Patrick Troughton died on the 28th March, 1987 at the age of 67, he left behind a remarkable legacy of acting work and deprived the profession of a highly-rated and much-loved English character actor.

As we reach the 30th anniversary of his passing, we look back on his career, and select highlights of his definitive roles.

Though Troughton appeared alongside the most celebrated actors of their time, often playing the guest villain of the week (including in episodes of Danger Man with Patrick McGoohan; The Persuaders! with Roger Moore and Tony Curtis; Ivanhoe (Moore again); Jason King (Peter Wyngarde) and Adam Adamant Lives! (Gerald Harper), we have chosen a selection where his performance is significant, or the production a cultural landmark.

We also haven’t chosen productions that are now sadly missing from the archives, such as Troughton’s personal favourite (his performance as Quilp in the BBC’s 1963 adaptation of Dickens’s The Old Curiosity Shop); Robin Hood and Kidnapped, which are fondly remembered by those who saw them (including the author’s mother, who has fond childhood memories of Troughton as Alan Breck!)

Troughton took small roles in two of Laurence Olivier’s revered Shakespearean film adaptations. The first was 1948’s Hamlet, for which Olivier won an Oscar for Best Actor. Look out for Troughton as the Player King. In the severely truncated script (which cuts the parts of Rosencrantz and Guildenstern entirely), Troughton has no speaking lines, but his distinctive face is apparent in the scene where Claudius’s murder of his brother is re-enacted. Troughton plays Tyrrell in 1955’s Richard III (a film also starring John Gielgud, Cedric Hardwicke, Claire Bloom and Ralph Richardson, among other theatrical legends), and has a few lines and a great close-up. The bit-part of the killer of the babes in the Tower is typical of Troughton’s canon; he makes a big impact in a small, malevolent role. He was also Olivier’s stand-in throughout the making of the film. Both adaptations have been hugely influential.

Troughton’s part as the seedy odd-job man George Jackson came right at the end of his career, but he was felt to be a safe pair of hands for a part in the very first episode of Inspector Morse (The Dead of Jericho). The episode aired only two months before Troughton’s death. Whilst Troughton’s habit was to overwork, lending his considerable talents to rubbish like the execrable situation comedy The Two of Us at the end of his life, he makes the most of his short amount of screen time in Inspector Morse, and was there at the birth of arguably the greatest British detective show ever made.

8. The Six Wives of Henry VIII

Troughton was incredibly worried about taking on the leading role in Doctor Who for fear that it would lead to him being typecast. It’s partly why he only stayed for three years in the part. Immediately after leaving the sci-fi classic, he was offered the recurring role of the Duke of Norfolk (by one of his most loyal employers, the BBC) in a lavish, colour 1970 production about the six women who were unfortunate enough to be married to one of England’s randiest and most easily dissatisfied monarchs. The show is brilliant, with the late Keith Michell slowly aged-up as Henry. Each of the six episodes is dedicated to Henry’s wives, and the production has great parts for leading women of the time such as Angela Pleasence, Dorothy Tutin, Rosalie Crutchley and Annette Crosbie. Troughton is an important cog in an incredible ensemble cast and clearly relishes playing the scheming Duke of Norfolk (a part later played by Christopher Eccleston, the first Doctor Who of the remake).

Troughton was not an actor who shied away from controversial subjects. The early 1960s series Espionage is now available on DVD, and the episode he appears in is He Rises on Sunday and We on Monday, in which Troughton plays fiery Irish republican John McBride. Troughton’s Irish accent is all over the place – he was never particularly noted for his ability to adopt accents – and his stab at Irish is much better in The Omen some years later. Nevertheless, as the impassioned John McBride, facing the British army after his participation in the Easter Rising, Troughton brings a complexity to a troubling part. He stars alongside Billie Whitelaw (also in The Omen), and the two of them create something special out of fifty very tense minutes of television.

The 1970s was undoubtedly the best time for children’s television. It was in colour, daring, and always pushing boundaries. Troughton starred in The Feathered Serpent which ran for two series towards the end of the decade. The show was set in the Aztec culture of Ancient Mexico and includes themes of human sacrifice, witchcraft and torture. Troughton clearly enjoyed playing the high priest Nasca, yet another scheming and unpleasant role. The hugely entertaining series also starred Brian Deacon, Diane Keen and Richard Willis, and benefitted from a cracking set of scripts from John Kane.

The movies from the Hammer film studios were low in quality and production values, but they retain a cult following and a great deal of affection from fans. Troughton appeared in several, giving perhaps his most notable performances in The Gorgon and The Scars of Dracula (in the latter playing Christopher Lee’s Igor-like manservant). It was whilst he was filming The Viking Queen on location in Ireland in 1966, a tale about Boudicca and one of Hammer’s few titles without a supernatural element, that Troughton famously received the call offering him the part of Doctor Who.

4. Jason and the Argonauts

The 1963 film is probably best-known for the sequence in which the heroes have a sword-fight with skeletons, but Ray Harryhausen’s stop-frame animation film stands up to this day. Troughton plays the blind seer Tiresias, haunted by the evil Harpies. He would later appear in another Harryhausen film,  Sinbad and the Eye of the Tiger (1977).

Troughton’s Father Brennan character is one of the first victims of the evil child in the classic horror movie, yet the five-minute sequence leading up to his demise, filmed at All Saints Church in Fulham, is one of the greatest and most memorable screen deaths in movie history. Troughton starred opposite Hollywood legend Gregory Peck, and again showed his skill at creating unforgettable characters with little screen time. The morphine-addicted priest living in a room with pages from the bible covering every surface is perhaps only outshone by Billie Whitelaw’s chilling nanny as most striking supporting part.

2. The Box of Delights

Devin Stanfield and Patrick Troughton in The Box of Delights. Credit, BBC.

A lasting Yuletide favourite, The Box of Delights has enthralled new generations with its Christmas spirit since its original airing in December 1984. Troughton plays the kind old Punch and Judy man who sets the young Kay Harker (Devin Stanfield) on his adventure. The series was directed by Renny Rye, who went on to make many of Dennis Potter’s later scripts. Troughton is magical in it.

Well, what else could it be? Troughton played the Second Doctor from 1966 to 1969. He always spoke fondly of his time on the show, but he was under enormous pressure and over-worked throughout. Nevertheless, he brought a kindness, quirkiness and vulnerability to the part, and audiences warmed to his portrayal, which followed on from William Hartnell’s more aloof, austere grandfatherly take on it. With his Beatle-mop and cheeky irreverence, Troughton helped to establish Doctor Who as an iconic part of 1960s British culture. He returned to the role three times, in 1972, 1983 and 1985 and remains enormously popular among fans of the classic series and the remake, and generally regarded as one of the best.

To learn more about Patrick Troughton’s life and career, we heartily recommend the honest, loving and thorough biography penned by his son Michael Troughton, which we have reviewed.

Were there any Troughton performances we missed that you feel we should have mentioned?

Advertisement. Scroll to continue reading.
In this article:BBC, Doctor Who, Patrick Troughton, The Feathered Serpent, The Omen