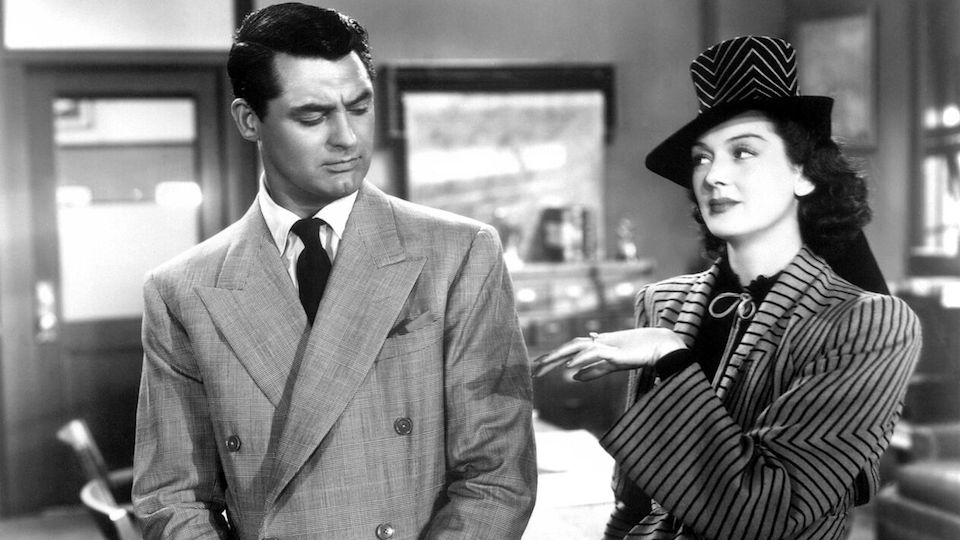 Screenwriting is a discipline filled with rules and best practices. It’s one of the reasons there are so many “how to” bibles on the shelves of your local bookshop. The likes of Syd Field, Bob McKee, Blake Snyder, Christopher Vogler, and many many more have made excellent livings out of showing (never telling) us the best way to write screenplays. One of the most repeated dictums in this complex art form is the “white space rule”. Less is more. Don’t use thirty words when three will do. The more white space there is on the page, the faster the script will read, and thus the reader is more likely to keep turning the pages.

But of course, rules are there to be broken, and you’ll find no finer example of the white space rule being obliterated with words, than Howard Hawks’ comedy masterpiece His Girl Friday. A film so wordy, and with dialogue that comes so thick and fast, keeping up with it is a challenge. This is screwball comedy done to perfection. Fast, fluent, and full of gumption.

Cary Grant plays the unscrupulous newspaper editor Walter Burns, who after learning that his ex-wife Hildy (Rosalind Russell) herself an ace reporter, is about to remarry and settle down in suburbia with a dull insurance salesman (Ralph Bellamy), decides to foil these plans and lure her back. Knowing she won’t be able to resist, he asks her to cover one last story, whilst simultaneously scheming to have Bruce arrested for any number of bogus crimes.

The plot fizzes in unexpected directions, turning from a sparky rom-com, to a drama of journalistic ethics, veering off to slapstick screwball, and then becoming a thriller about a death-row criminal. And before you know it, it’s a sparky rom-com again. That this works so well is in no small part down to the talent and chemistry of the fabulous trio of lead actors. But for making this all seem so effortless, when surely nothing could be further from the truth, the credit should of course go to Hawks, and his screenwriter, Charles Lederer. To negotiate such tonal shifts, with so much dialogue flying in every direction, it is a masterclass of both writing and direction.

His Girl Friday is a hilarious, and genuinely timeless comedy, bursting with wit and one-liners. Not many films have aged as well as this one. In the opening two scenes (the newsroom and the restaurant) Grant and Russell establish themselves as one of the all time great screen double acts. Aside from the incredible verbal dexterity, their every expression, gesture, and nuanced phrase is a work of exquisitely timed comic genius. An absolute joy.

Released by Criterion on a 2-disc set, this edition is crammed with supplementary features, the star of which is the 2K restoration of Lewis Milestone’s 1931 feature The Front Page, the film on which His Girl Friday is based.