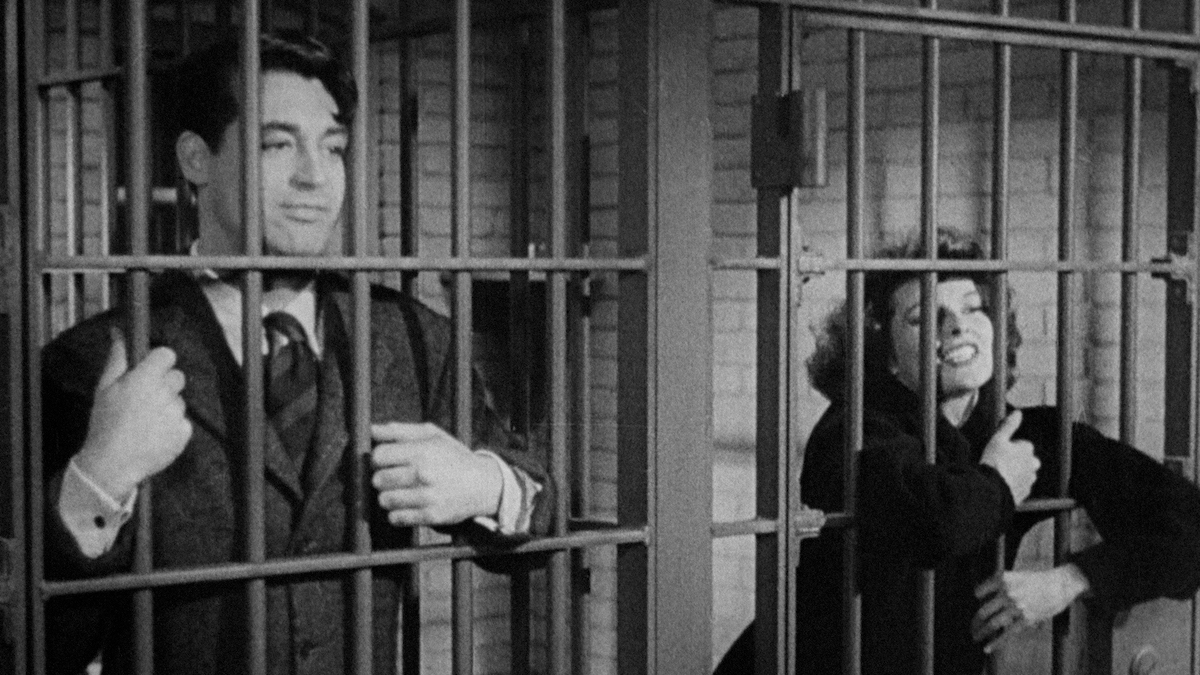 I’ll be honest with you; I’d buy this Criterion Collection release of ‘Bringing up Baby’ for the fabulous artwork alone. I mean, just look at it! The fact that the film is one of the all-time great Hollywood screwball comedies is merely an added bonus. This Howard Hawks classic, starring Cary Grant and Katharine Hepburn is one of the most joyously silly movies ever made, and a surefire cinematic pick-me-up for anyone who needs it.

The plot is almost too profoundly daft (or genius…or both?) to try and summarise, but here goes. Grant is David Huxley, a mild-mannered and easily befuddled paleontologist, waiting for the final bone he needs to complete the brontosaurus he has been labouring over for the past four years. The bone is due to arrive the next day, which coincidentally is the day he is to be married to his assistant Miss Swallow (Virginia Walker). She reminds him that he needs to go and play golf with the lawyer of a wealthy benefactor, to try and secure a substantial grant in order to continue his work.

It is on the golf course however, that he runs afoul of Susan Vance (Hepburn), a carefree and playful agent of chaos, who steals his golf ball, then his car, and proceeds to send both their lives careening on a non-stop slapstick adventure for the next 24-hours. Susan’s aunt turns out to be the wealthy benefactor, her little dog steals the bone, and the Baby of the title is a leopard sent to Susan by her brother which they somehow have to look after, all the while dealing with cases of mistaken identity, incompetent lawmen, a dangerous missing circus animal, and more perfectly timed pratfalls than you can shake an intercostal clavicle at.

And that’s just scratching the surface. In little more than 100 minutes of running time, Hawks (working from Dudley Nichols sensational screenplay) packs in more action, incident, gags, and romance than you get in most 10-part TV shows. Frequently hilarious and rip-roaringly paced, this absolute nutcase of a film—as Sheila O’Malley notes in her terrific essay which accompanies this release—is the “feral stepchild” of the screwball genre. “The film doesn’t just go off the leash; it questions the concept of leashes altogether.”

It takes quite a deft touch to make a film where every character is mad as a march hare, and yet somehow make it work. I guess Huxley is meant to be the straight man in the film (the prototype absentminded professor), but Grant brings a kind of hilarious, frantic exasperation to him that just tips him over the edge. As for Hepburn, she is extraordinary. Playing against type for the first time, and proving herself a comedic natural, she is absolutely irresistible to watch. And together, they are perfect. Equally at ease throwing themselves down hills as they are throwing around the sparkling rat-a-tat dialogue in those absurd yet iconic mid-Atlantic accents of theirs.

This new release comes with an audio commentary from Peter Bogdanovich, recorded in 2005. There’s also a video essay by Scott Eyman (author of Cary Grant: A Brilliant Disguise) which focuses on the actor’s early career, plus a brand-new interview with cinematographer John Bailey, talking about the career and style of Russell Metty, the man who lensed ‘Bringing up Baby’.

Another exclusive for this release is an interview with film historian Craig Barron, discussing the career of visual effects pioneer Linwood Dunn. If you’re interested in the technical side of filmmaking, you will love this. There’s also a discussion of the many optical tricks they employed in ‘Bringing up Baby’ to make it seem like the actors were interacting with the leopard.

Howard Hawks: A Hell of a Good Life is a feature documentary from 1977 with the last interview ever conducted with Hawks before he passed away. The disc also includes select scene commentary with costume historian Shelly Foote discussing the career of designer Howard Greer and the work he did on this film.

There is a terrific audio only interview with Cary Grant from 1969 following a screening of the film as part of a 30s season presented by the Academy where he takes questions from the audience. There’s also an audio excerpt of a conversation between Hawks and Peter Bogdanovich from 1972. Finally, there is the trailer, an essay by critic Sheila O’Malley, and the 1937 short story by Hagar Wilde on which the film is based.