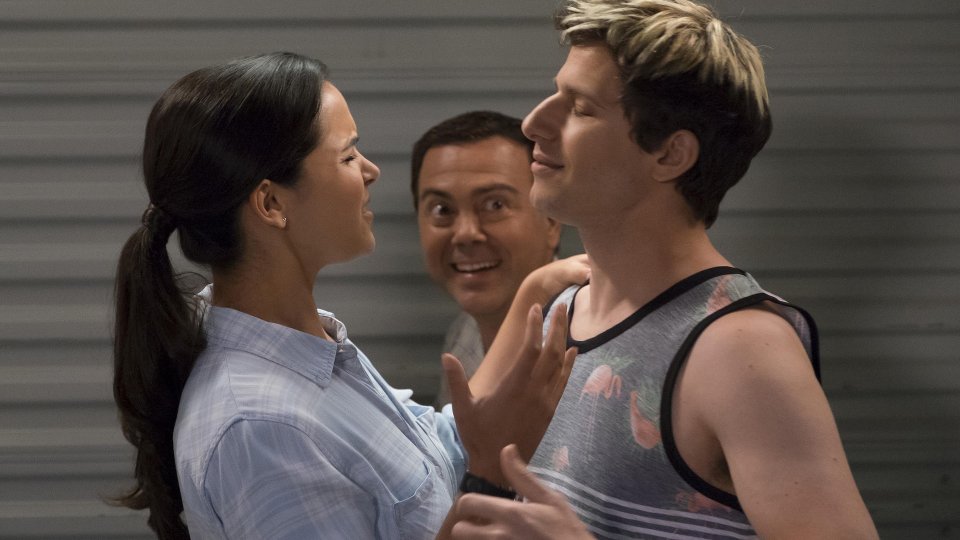 Peralta (Andy Samberg) and Holt (Andre Braugher) struggled to maintain their cover after being put in witness protection on the season 4 opener of Brooklyn Nine-Nine.

The first two parts of the three parter were shown in the UK last week and Peralta and Holt battled one another as they struggled to adjust to life in Coral Palms, Florida under new identities. Liaising with their U.S. Marshal Karen Haas (Maya Rudolph), Peralta and Holt decided to take matters into their own hands and draw out Jimmy Figgis.

They got their opportunity when a woman filmed an unfortunate mishap featuring them both. After stealing her phone, initially to delete the video file, they decided to publish it online so they could attract Figgis’ attention, take him down and return to their jobs.

Meanwhile at the Nine-Nine, Amy (Melissa Fumero) was less than impressed when the unqualified new Captain CJ (Ken Marino) started at the precinct and gave the team whatever they wanted to keep them happy. In a bid to turn things round, Amy convinced the team to take a stand against him, telling him he needs to say no to things to earn their respect. That ultimately backfired when Peralta called the Nine-Nine for help and CJ told the team they had to stay put.

The next episode of Brooklyn Nine-Nine is Coral Palms Part 3. The team go on a road trip to help Peralta and Holt take down crime boss Jimmy Figgis, but their plan is hindered by an unforeseen injury.