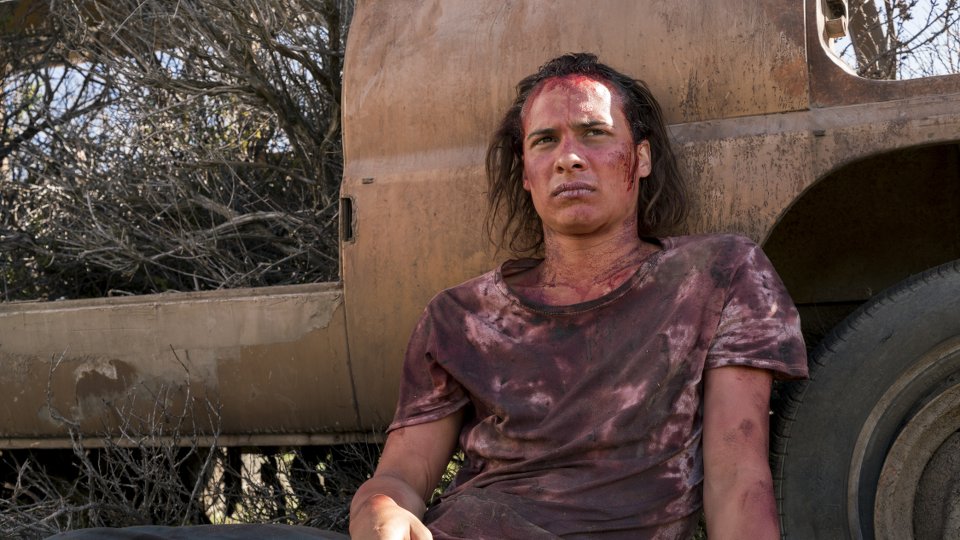 British actor Frank Dillane became a worldwide star when he played the role of a young Tom Riddle in Harry Potter and the Half-Blood Prince.

He’s also starred in the Netflix hit Sense8 but he enjoyed his first leading TV role as part of The Walking Dead spin-off Fear the Walking Dead. In the show he plays central character Nick Clark, a former drug addict who is trying to escape from Los Angeles with his family during a zombie apocalypse.

I caught up with Frank to talk about the evolution of Nick, discuss his fractured relationship with his family, and to find out which other character he would choose to play on the show.

Nick’s journey during season 2 is pretty epic and very much one of two halves. At the midseason point he breaks away from the group. What do you think is the motivation behind that?

I think Nick has in his fabric the instinct to run. That’s always been a thing of his that he’s been able to leave people without it taking its toll too much and cope on his own. I think it’s easier on your own when your family is so dysfunctional. We seem to be causing havoc everywhere we go and Nick has his own things to do I suppose. If you’re a young man in the apocalypse I don’t think you can stay… you still need to go out in the world. It’s an amalgam of growing up and his mother not really understanding him, and a curiosity to see what’s going on in the world.

In season 1 Nick is struggling with getting clean following a drug addiction and in season 2 he’s quite a different character. In what ways do you think he’s grown?

I think he’s probably growing up fast and continuing to grow up fast due to the circumstances. I think in terms of him being different from before, I think heroin will do that to you. Him being clean means there’s a bit more colour in his cheeks and light behind his eyes. I think just living a clean life will revitalise you.

At the point that Nick breaks away from his family and the rest of the group, he then gets his own storyline with a completely new group of characters. What was that experience like for you as an actor?

Daunting and hard work. I missed everyone just because holding your own storyline is pressure and it’s a lot more work. It makes me nervous if I think of it in terms of that and working with people you’ve never worked with before. I was very pleased to be trusted with my own story arc. I was pleasantly surprised and daunted.

You mentioned about Nick’s dysfunctional family. Do you think they’ll be able to reunite and resolve those differences or do you think that too much has happened for them to overcome them?

Out of all the characters in the show, Nick seems to be the most adaptable and the one most able to adjust to this new world he’s living in. Do you think his struggle with addiction and his relationship with his family have helped him to do that?

It’s hard to say isn’t it? I often think the way this world is run, we don’t really know what our strengths are and we don’t really know who’s good at work. Possibly Nick’s background, and survival before the apocalypse, may have formed his ability to survive in the apocalypse because he’s always been close to death and gore. I think he probably is more adaptable due to something in his past but I couldn’t say what.

Who is your favourite actor on the show to have scenes with and why?

I enjoy Colman’s scenes just because he’s got such a cool character. Mother/son, sister/brother and step-father/step-son scenes can be quite melodramatic just because of the set up whereas Strand’s stuff seems to be a bit more fun. That’s nothing to do with the actors, just the character is such a cartoon character that he’s fun to be around. He gets the best writing, the bastard! (laughs)

I don’t think I could play Colman’s character Strand. I think it’s a little bit out of my range. He does it so well. I always wanted to play Chris. I think he’s a very interesting character and I always thought he was the best character to be honest.

Chris really goes off the deep end during season 2. That must be a very challenging role to play?

Would you like to see some sort of crossover with The Walking Dead in the future?

I think they could cross. I was thinking we could walk past a hospital bed or something and you imagine that Rick’s in there. I don’t think it matters if we don’t crossover.

What’s been your favourite scene or episode from season 2?

I don’t have any favourite stuff that I’m in but I thought all of the wedding stuff was interesting. I haven’t seen it though so I don’t know how (the end product) looked.

Fear the Walking Dead: The Complete Second Season is available on Blu-ray and DVD now courtesy of Entertainment One.

Advertisement. Scroll to continue reading.
In this article:Fear The Walking Dead, Frank Dillane