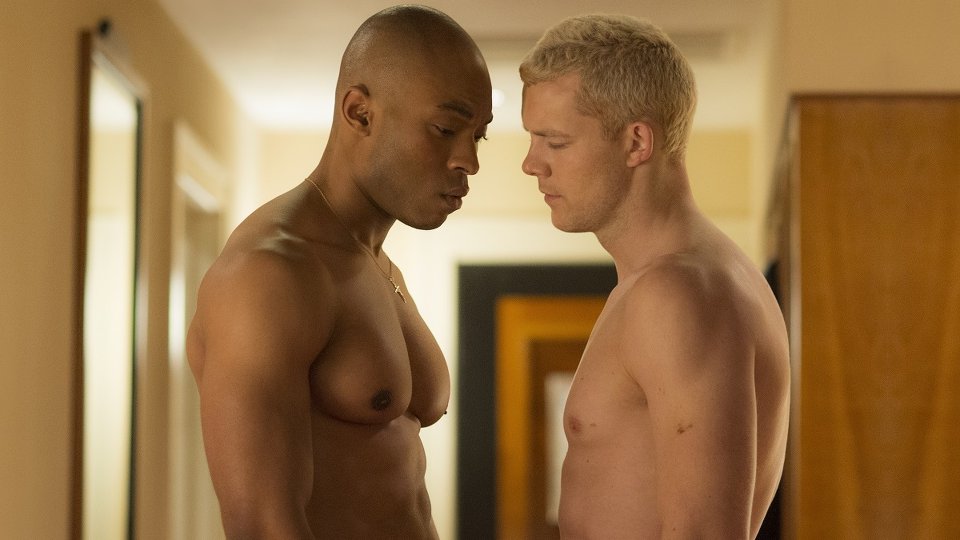 Rising stars Jason (Russell Tovey) and Ade (Arinze Kene) have climbed up the ranks of a London-based football team, having started at the academy together when they were 8. The night before their first game as part of the first team, Jason and Ade are too excited to sleep so they spend time verbal sparring and winding each other in their hotel room in Romania. The conversation takes a more intense turn and the two friends share a kiss that changes everything between them.

The Pass first found success as a play and its writer John Donnelly has written the screenplay for this big screen adaptation. Three out of four of the movie’s actors were involved with the stage version – only Arinze Kene is a new addition – and they reprise their roles for this big screen outing. The film explores homosexuality in the Premier League, a timely subject that has had a fair amount of spotlight in recent times.

In the first part of the movie it’s unclear whether Jason or Ade are actually closeted or embracing the opportunity that arises to explore their sexuality. Things become a lot clearer when the story jumps into the future and Jason is depicted as married with kids but desperately fending off rumours surrounding his sexuality. A botched attempt to make a sex tape with a woman he’s hired pushes the story further into the future as Jason reunites with Ade for the first time in over a decade.

The tension between Jason and Ade, both sexual and emotional, is the hook that the film hangs on. In their first exchange they are carefree young men barely out of their teenage years and seemingly on the cusp of greatness. They clearly have a strong bond and there’s unresolved feelings between the two, not that either of them necessarily fully realises that. Jason is the cockier of the two men who is comfortable hiding behind his alpha-male personality when things get too difficult for him to handle. Ade on the other hand has conflicts due to his upbringing and the religion of his family. The differences between the two men are the cause of their friction but it’s what they don’t say to one another that bubbles under for the first section of the film.

The Pass’ climax is worth the wait and the scenes when Jason and Ade reunite are as explosive and revealing as you could hope for. The two men have gone done very different paths but one of them is much more messed up than the other. The introduction of bell boy Harry (Nico Mirallegro), who is pulled into the midst of Jason and Ade’s conflict causes more problems but provides an opportunity for them to air a lot of grievances and feelings that they haven’t before that moment.

The performances of Russell Tovey and Arinze Kene are what make The Pass such a good watch. They match each other throughout and feed off the chemistry they create together. Tovey is proving himself to be a very versatile actor and he’s particularly strong as Jason. The character could easily have been one-dimensional but in Tovey’s hands he’s surprisingly sympathetic despite not being all that nice. Both actors really understand their character and give nuanced performances.

The only criticism I have of The Pass is that the tone is a little uneven. The first and third acts contrast starkly and things do get a little unwieldy by the end. It’s not a huge problem but it’s one that is noticeable by the time the credits role. Other than that The Pass is a very timely film that is sure to become a talking point. With strong performances from its leads and a tight script, The Pass is an engaging film that’s not always an easy watch but is worthy of your time.