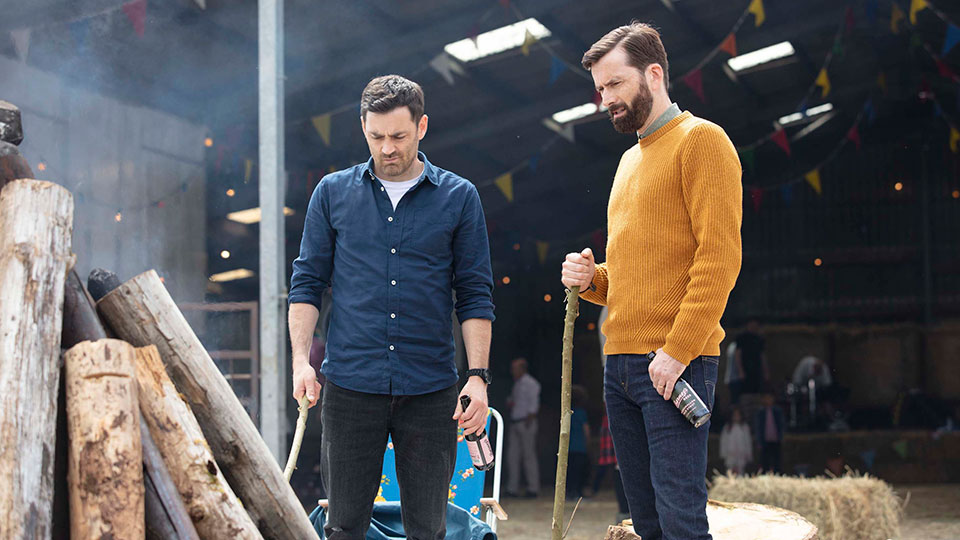 Opening with chilling imagery of a house burned down and a car overturning, Deadwater Fell kicked off a murder mystery tonight that will unravel over the next four weeks.

If you want to avoid all spoilers for Deadwater Fell, stop reading now.

Following those scenes viewers were taken inside a classroom where Kate (Anna Madeley) and Jess (Cush Jumbo) were teaching a primary school art class. Once the kids finished their pictures, they were escorted outside the school and through the streets to cheer on a bike race.

GP Tom (David Tennant) was seen in an office zipping up a suitcase before joining his colleagues to watch the bike race out of the window while Jess’ boyfriend Steve (Matthew McNulty) led the police force to ensure the race took place without incident. The bikes whizzed past and the children seemed miffed that they’d only got to see them for a brief moment.

At a community party after the event, Kate refused a slice of cake from Jess and admitted she was pleased to have an excuse to get out of the house. The two women watched on as Tom and Steve lit a fire.

The scenes kept jumping to someone rifling through evidence, which at this point we presume is taking place after the fire.

Back at the party, Jess intervened when Steve rowed with his ex Sandra (Lisa McGrillis) about taking their kids for a night. Jess said she didn’t mind and once she’d diffused the situation, the group partook in some barn dancing. Steve was interrupted by his two children, one of whom had burnt his arm, and Tom helped to patch him up.

The two couples walked home together, making plans to meet for dinner the following night. Jess and Steve got home first, leaving Kate, Tom and their children to continue on home. Tensions around Steve’s relationship with his ex started flaring as he became frustrated with her messing them around.

One of the kids woke Jess up claiming there was a burglar in the house. She got up and put him back to bed, reassuring him that there was no one there. As she was about to leave she noticed Tom and Kate’s house burning when she looked out the window.

Rushing over to the house with Steve and others from the neighbourhood, Jess called for Kate. As the flames raged, the community pulled together to try and get in the house and rescue the family. Steve smashed through an upstairs window to gain access to the house and he stumbled around trying to find his friends in the thick smoke.

He first found Kate’s lifeless body and pulled her towards the window. She was taken down to the ground as one of the neighbours tried to revive her with CPR. A distraught Jess looked on frantic while Steve continued to make his way through the inside of the house. The next person he found was Tom, who like Kate was lifeless, and he got him out of the house. Steve broke down in tears as he was asked if he’d managed to locate the children while the battle to save Kate continued.

The fire brigade arrived at the tragic scene as flames continued to engulf the house and the whereabouts of the children remained unknown.

Tom survived the fire and was treated in hospital for smoke inhalation with Jess by his bedside. She thought back to a day when the families went to the beach together and held his hand while she waited for him to wake up. Steve entered the hospital room in shock and was comforted by Jess.

After leaving the hospital, Steve started to have flash backs to the fire and asked Jess to pull the car over. He ran to the side of the road gasping for air as he tried to process the ordeal he’d been through. At the house the bodies of the children were removed from the house and it was confirmed that all three had died.

Jess got out of the car to try and calm Steve down, who was on the verge of having a panic attack. They went to see Sandra and the kids, where the three embraced and grieved together.

At the morgue Steve was told that pine needles were found in the feet of one of the children. He also discovered that all three children had been injected with something prior to their death.

Steve and his partner Taylor (Lorn Macdonald) were tasked with telling Kate and Tom’s family of their death while the kids at the school were informed of the tragedy.

D.C. Gemma Darlington (Laurie Brett) and her partner Collins (Gordon Brown) met Steve at the property where they learned that Kate had called her mother-in-law before the fire but they didn’t have a conversation.

We then learned that Kate had been on anti-depressants for depression and anxiety. Her doctor said she had been feeling much better prior to her death. Steve looked through CCTV footage of Kate buying locks from a local shop.

Steve, Jess, Sandra and some friends got together and Steve was alarmed to find out that one of his children had asked if he was going to die. Conversation turned to Kate’s mental health and the group speculated who had caused the fire with Simon (Jamie Michie) pointing the finger at Tom. After everyone left, Jess administered her insulin before sharing a beer with Steve and asking him for details about the case to try and find out if Kate was a suspect. He didn’t say anything so as not to break confidentiality around the case.

In another flashback to the day at the beach, Jess saw Kate having an emotional phone call with someone before clashing with Tom’s mum when one of the kids had an accident. Tom was snappy with Kate for telling his mum to ‘fuck off’ and he gave her a glass of wine. A passive aggressive conversation took place with Tom asking if they can never have a nice day without Kate ruining it. Jess saw what was going on and offered to go with Kate who was gathering the kids up to leave.

The next day Jess removed the name cards for Tom and Kate’s children at the school while Steve interacted with two mouthy kids wanting to know the grisly details of the fire. Going through Kate’s possessions at work, Jess found a cigarette tin with spliffs inside, which she put in her handbag.

Steve was praised for his work on finding the footage of Kate buying the locks and then he watched some home movies Tom filmed with the kids featuring Kate and Jess about to share a spliff.

In the flashback Kate lost her temper with the kids while driving home. Jess tried to encourage her ignore her mother-in-law but Kate’s anger caused the car to crash, flip over and land on its roof.

At the hospital Tom woke up with Steve by his side and Jess rushing into the room. It was then revealed that Tom and Jess had been having an affair and in the present day Tom asked what Kate had done.

Did Kate really kill herself and her children, and try to kill Tom, or is there more to it?