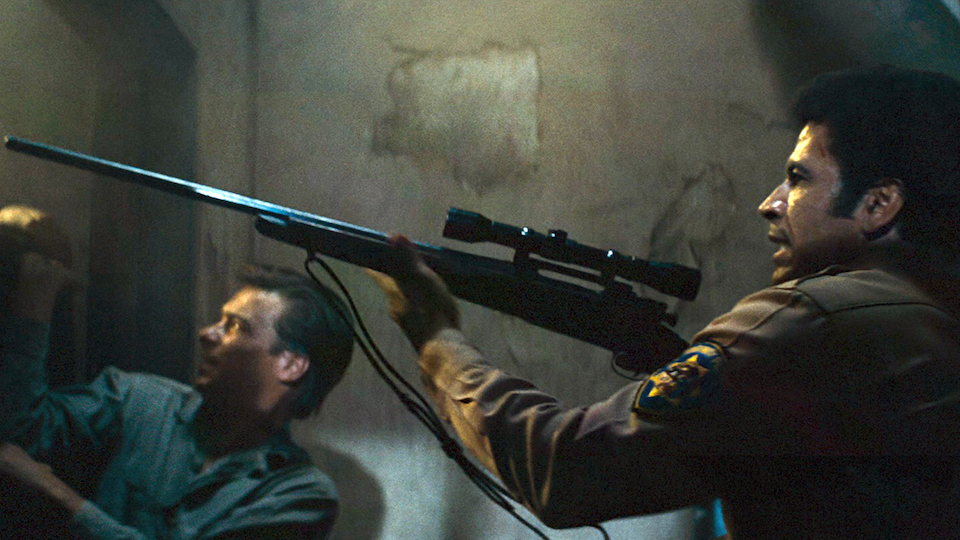 To celebrate it’s 40th anniversary, John Carpenter’s hugely influential exploitation siege movie, Assault on Precinct 13 is being given a stunning re-release on blu-ray. Made on a miniscule budget, it is one of the simplest and most effective pieces of genre filmmaking ever produced. Carpenter’s tightly plotted script, efficient direction, and propulsive synth-heavy score, all combine perfectly in this cult classic homage to Rio Bravo and Night of the Living Dead.

The film is set in a ghetto of Los Angeles – a violent nightmare world, terrorized by a ruthless gang. When six of them are gunned down by the police, the gang leaders swear a blood oath of vengeance, and embark on a brutal and shocking killing spree. The ice-cream truck scene in particular, has lost none of its potency.

Meanwhile, police Lieutenant Ethan Bishop (Austin Stoker) has been assigned to oversee the closure of an old precinct. On Bishop’s first night, a US Marshall transporting prisoners to death row has to stop there as one of the condemned has fallen ill. They call for medical support, but the phone lines are cut. Then the lights go out. Then the assault begins.

With only one other cop, two receptionists, and hardly any weapons, Bishop must enlist the support of the death row murderers in order to survive. This includes the notorious, and wonderfully named Napoleon Wilson (Darwin Joston), a wise-cracking, charismatic son of a bitch, and just the kind of guy they need.

Carpenter has a composer’s ear for rhythm and timing, and it shows in the way he expertly builds and releases tension, in a symphony of terror and violence. The film starts slowly, developing the plots and characters that will eventually converge on the police station. Then when the action starts it is an unrelenting sequence of high-octane carnage. There isn’t a single bum note.

Way ahead of its time in terms of racial and gender politics, and filled with memorable characters and iconic set-pieces, Assault on Precinct 13 has transcended its cult status to become a huge influence on modern cinema and television. It’s legacy can be found in From Dusk ‘Til Dawn, The Guest, Stranger Things, It Follows, and of course The Walking Dead.

Depending on which version you buy will determine what extras are on the disc. All versions come with audio commentaries from John Carpenter and frequent collaborator Tommy Lee Wallace. There are also brand new interviews with Austin Stoker, Wallace, and producer Joseph Kaufman. The blu-ray comes exclusively with a student short film made by Carpenter, and a documentary about Laurie Zimmer, who plays Leigh in the film. The limited edition box set is of course the best option, as it comes with all those previously mentioned, as well as five art cards, and a bonus CD with the incredible soundtrack.