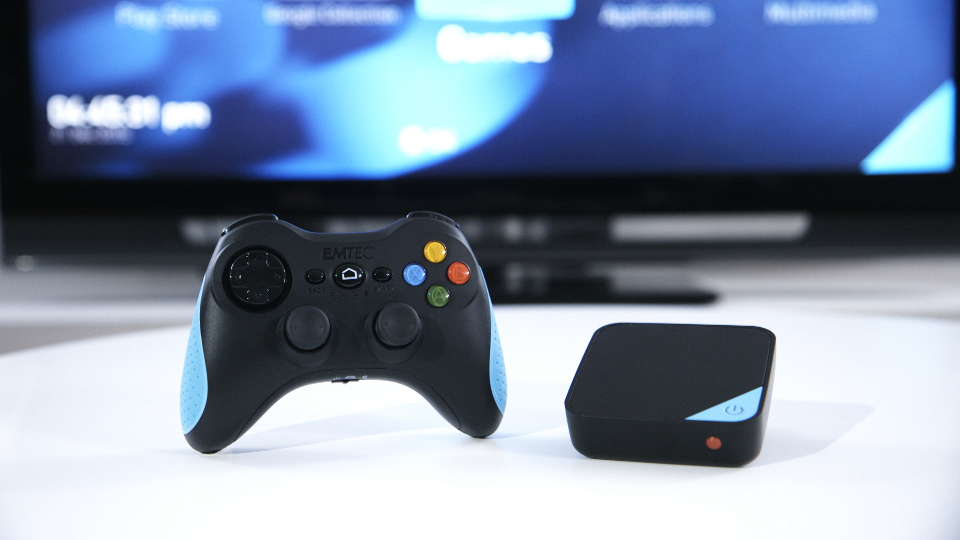 The GEM Box is an Android 4.4 powered Microconsole aimed at families and casual players with its focus on gaming and multimedia. Over the past couple of years we’ve seen similar devices including the Ouya and GameStick.

Out of the box the GEM Box immediately surprises with its tiny size. It measures just 8cm square, 2cm tall and weighs just 100 grams. The small size makes it very easy to move around and travel with as it can fit in your pocket.

The GEM Box is powered by a 1.5 GHz Quad-Core CPU, 1GB RAM and 16GB Flash Memory. There are HDMI and Ethernet connectors as well as support for Wi-Fi and Bluetooth connectivity. On the side the GEM Box has a microSD card slot and a USB port.

Set up is as simple as plugging in the included power adaptor and connecting the GEM Box to your TV via the included HDMI cable. You can enter your Wi-Fi details to get the device online or plug direct into your home network with the included Ethernet cable.

Watch a video of the GEM Box in action below:

The wireless controller included with the GEM Box is fantastic and feels instantly familiar to anyone who has played on an Xbox 360 or Xbox One. The main difference is that the left analog stick has been switched around with the D-Pad like you would find on a PlayStation DualShock controller.

It feels nice in your hands and has blue textured rubber grips on the sides. In addition to the two analog sticks and D-Pad are A, B, X and Y buttons, Back, Start, Home, Left and Right Triggers and Bumpers.

The wireless controller doesn’t take batteries and instead is recharged via a micro USB port and the included cable. On the front of the charger is a slide switch to change between controller and mouse modes. In mouse mode the sticks control an on-screen mouse pointer and it works really well in the absence of touch controls.

Set up of the controller is simple as it is already paired with the GEM Box so you just need to turn it on. The GEM Box supports up to four controllers connected at a time to allow for same screen multiplayer gaming.

I’m going to presume you’ve used an Android Phone or Tablet before. The GEM Box has a custom User Interface that works well on a big screen TV. It’s intuitive, easy to learn and feels a bit like the SteamOS big screen mode.

It defaults to the games menu and there’s a small selection of games and apps preloaded onto the device including My Little Pony, Wonder Zoo and Asphalt 8. Including games is a nice idea and lets you see what the GEM Box is capable of straight away.

For more games or apps you can visit the GEM Store, Google Play or GameFly. There are literally thousands of free-to-play games available. If you’ve owned an Android device before you’ll likely already have some favourites. Those on the GEM Store are certified to work with the gamepad.

Installing some apps requires a little more effort than just downloading them via Google Play. There is more information available on the official GEM Box FAQ page.

If you’re looking for console style gaming then a monthly GameFly subscription allows you to stream games to the GEM Box. There’s an impressive selection on offer including The Witcher 2 & 3, Batman Arkham Asylum, City and Origins, Borderlands, BioShock and many LEGO titles. The GameFly streaming works really well but really requires a fast wired connection.

Other gaming options include emulators for retro titles and if you have a decent Nvidia powered PC you can use the GEM Stream App. This lets you stream titles from your PC direct to the GEM Box for play on your TV.

There are all kinds of multimedia options for the GEM Box. Once loaded onto a microSD card or a USB device you can view photos, music and video files on the device. There is also included Miracast support allowing you to mirror your Apple and Android devices to your TV screen.

One neat feature is the on screen keyboard. It uses the A, B, X, Y buttons and it’s surprisingly easy to type quickly with it.

If you’re looking for a way to play Android games or stream PC games to your TV then the GEM Box is worth a look. It’s also a great little starting console if you can’t afford or don’t want to jump straight in with Xbox or PlayStation. The multimedia features are also handy and there are plenty of things you can do with the device. If you’ve already got something similar or more advanced then there might not be enough here to tempt you.

The GEM Box was reviewed using a sample supplied by Emtec.