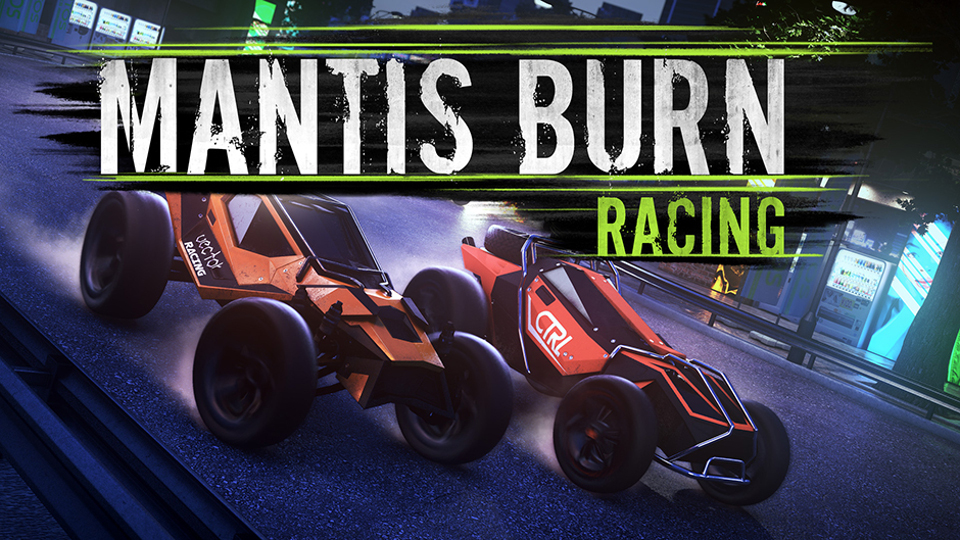 Mantis Burn Racing is a top-down arcade-style racing game from VooFoo Studios (Pure Pool). Top down racers used to be a popular genre back in the 8 and 16-bit days with fantastic titles such as Championship Sprint, Super Cars and Micro Machines. These days with more powerful consoles racing games tend to aim more for realism so it’s nice to see VooFoo try something a bit different.

After you fire the game up you’re presented with a nice selection of options. There’s Local play for up to 4-players, Online play for up to 8 players and the main event which is the Career mode.

Career is where you’ll be spending most of your time with the game and it’s a surprisingly detailed and lengthy affair. You start out with a single car in the Rookie class and get to drive through three seasons of events. Then you progress to three seasons of Pro events before tackling the final single season of Veteran events.

A season is presented as a branching grid of events. Each event has six Gears up for grabs which are won by placing in the top 3 and completing 3 challenges. At times you’ll need to revisit events to win Gears that you missed as some events are gated off until you hit a certain Gear level.

There’s a brilliant variety when it comes to events. There are standard 3 lap races, 5 lap Endurance races, 2 laps Sprint races, Time Trial and Hot Laps. There are also Knockout races where each lap the last place driver is eliminated, Accumulator races where drivers accrue more points the closer they are to the front and finally Overtake races where the winner is the driver who overtakes the set number of cars first.

Beating events also rewards you with upgrades for your car, XP points and cash. These can then be spent on upgrading your cars and buying new ones. You need to buy additional cars as some races limit the types of cars that can enter based on their weight class.

Mantis Burn Racing features eight tracks to race on and mixes it up by mirroring the tracks and changing the weather and time of day that you can race. This makes it feel like there are a lot more tracks and keeps things interesting. Some of the tracks also have neat little shortcuts if you’re quick enough to spot them.

The racing action takes a little getting used to the controls but once mastered it’s a lot of fun and very addictive. The controls are easy with a trigger to accelerate and another to brake. The main thing to master is the way the cars drift and doing so build your boost meter. Once full you can activate it for a short boost.

Check out some Mantis Burn Racing screenshots in our gallery below:

The game tracks your driving and rewards you with XP for things like overtaking, drifting, clean sectors and destruction. Experienced players might find the initial challenge of the AI cars to be lacking but trust me it gets much more difficult later on.

Graphically the game looks lovely with detailed tracks and nice touches such as dust trails from the cars. If you’re lucky enough to be playing on PS4 Pro console you’re in for a treat as the game has full native 4K support running at 60fps.

As good as the game is it can be a little frustrating at times due to lengthy load times. These are made worse by no easy way to replay an event without going back to the career grid. Also if you don’t have friends to play against it can be tough to find a game online.

The Career mode will keep players busy for tens of hours and it’s also a fantastic game to play against friends. One thing that will keep me coming back to it is the weekly challenge mode. Overall I’ve had a lot of fun with Mantis Burn Racing and can easily recommend it to anyone who enjoys racing games.

We’re also currently running a competition (until November 18th) to win a copy of Mantis Burn Racing on PS4, so check it out if you haven’t bought it yet.