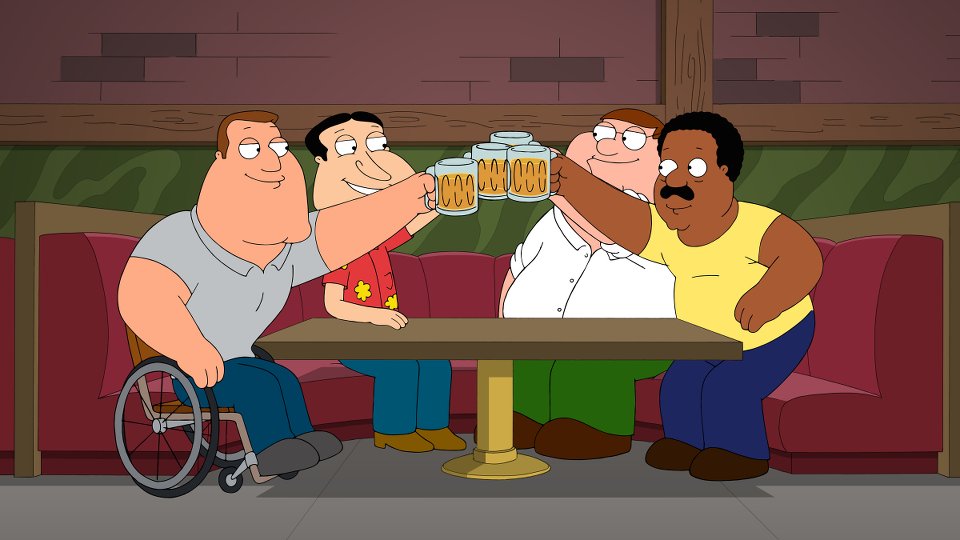 The Simpsons may be heading for the title of longest-running animated series but it doesn’t quite have the teeth that it used to. Seth MacFarlane’s Family Guy was often referred to as the poor cousin of Matt Groening’s popular series but actually it’s a much more biting satire of modern life. After coming back from cancellation in 2004, Family Guy has remained hilarious and returned with even edgier humour than it had in its early days. Recently the Season 16 DVD boxset was released featuring 20 new episodes and a cover depicting Peter Griffin as Miley Cyrus, recreating the popstar’s famous Wrecking Ball video.

From the opening episode of Season 16, you know you’re in for another loopy ride with the Griffins. Pilling Them Softly pokes fun at the US trend to medicate children for ADHD with Stewie getting doped up so others can cope with his behaviour. Despite Lois’ reservations, she goes ahead with it and soon Brian takes an interest realising it could help him be more productive. You can already tell from the subject matter that Family Guy isn’t interested in being at all PC and that’s one of the reasons why it’s such a well-loved show.

Over the course of the season Stewie builds himself a new robot friend (Guy, Robot), Peter’s estranged wrestler sister Karen comes to town (Peter’s Sister), Quagmire is revealed to be a Korean soap star (Candy, Quahog Marshmallow), and Chris finds himself in a world of trouble after taking Peter’s old phone (An App a Day), and Brian and Stewie take a trip to India in search of a woman Brian has fallen in love with (Road to India).

One of the best episodes of the season is Peternormal Activity, where Peter enlists Joe, Cleveland and Quagmire to make a horror movie. As they find their location, they accidentally murder someone and instead of coming clean about it they cover it up. It’s a classic episode of the series and when Peter is front and centre, the show always soars.

Special features on the boxset include audio commentaries on select episodes, a full episode animatic on A Lot Going On Upstairs, a featurette looking at The Art of Family Guy, deleted scenes and a talking animals mash-up.

Family Guy Season 16 is a rude, crude and hilarious as any other season of the show. The comedy has been criticised for not being as good as it used to be but I think that’s unwarranted criticism. I laughed heartily and frequently across the 20 episodes, and I was happy to rewatch many of them again after my first viewing. If you don’t like your comedy coarse, then you won’t like Family Guy. If you like something that strays outside of what’s considered acceptable taste, then you’ll have a ball!